The fox takes on the symbolism of all animals.

It is thus just one of the many roles shamans used to achieve ‘ecstatic experience’.  There is thus a link here with both body image distortion and shape shifting both of which can occur during an out of body experience.  The fox is thus yet another means of transport. 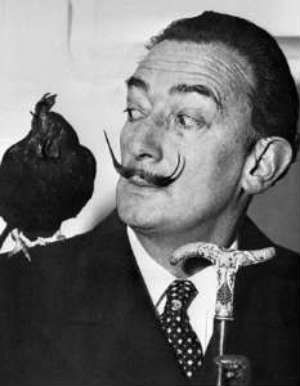 Salvador Dali was a " fox (or cock) among chickens".

In the Middle Ages the fox obtained a very bad name, both symbolically and practically, as most farming people associated the fox with its ability to kill their chickens.   This was made yet more unfortunate because the cock in  particular is an extremely important bird symbolically.  In effect the Cock and the Fox become adversaries.

A Dictionary of Symbols – J E Cirlot
A common symbol for the devil during the Middle Ages, expressive of base attitudes and of the wiles of the adversary

So there you are, a fox is a wily old shaman!

But there is something fascinating about this split between the Cock and the Fox.  If you glance for a moment at the stages of the spiritual path, they can be viewed as splitting into two. 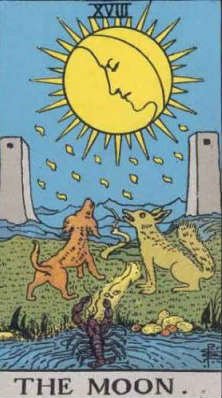 If you look at the Tarot card for the Moon, this symbolism is incorporated, one of the animals barking at the Moon is a fox.

Theoretically therefore the two are enemies.  But if we turn to a system like the Tibetan Buddhist system we can see that they have actually been married rather successfully, although there is always a little tension between the two  .....