Physical labyrinths take their symbolism from symbolic labyrinths. There are two types - the complex type and the simple type used in different ways.

They were used extensively as part of the Mysteries.  The use of underground labyrinths could be used to provide a sense of both ceremony and importance as well as invoke a certain amount of reverence and fear which all helped in the process.  It is also clear that if the candidate didn't pass the test - in effect did not traverse the labyrinth successfully, they had not reached the necessary stage in the initiation process and were unsuited to continue.

The Egyptian labyrinth attached to the Great Pyramid at Giza is of the complex type.  Known in some texts as the Shambles, it was part of the Egyptian Great Mysteries, it looks to have been a terrifying ordeal.

“often the object of a labyrinth was to defend a 'centre' in the first and strictest sense of the word; it represented, in other words, access to the sacred, to immortality, to absolute reality, by means of initiation.  The labyrinth rituals upon which initiation ceremonies are based are intended for just this – to teach the neophyte, during his sojourn on earth, how to enter the domains of death without getting lost” – Mircea Eliade

Other Complex examples - The Labyrinth of Porsena (6th century BC) is just one of a number of similar structures found in the cities of central Italy  - Perugia, Orvieto, and Todi.  According to Pliny, the Porsena labyrinth was part of a monument (with a base of 90 meters on each side) which was the tomb of King Porsena at Chiusi.  It has long since disappeared but it was quite probably a complex labyrinth.  And Cirlot gives some more examples of complex labyrinths

A Dictionary of Symbols – J E Cirlot
A labyrinth is an architectural structure, apparently aimless, and of a pattern so complex that, once inside, it is impossible or very difficult to escape. Or it may take the form of a garden similarly patterned. Ancient writings mention five great labyrinths:

it is likely that certain initiatory temples were labyrinthine in construction for doctrinal reasons. Ground plans, sketches and emblems of labyrinths appear fairly frequently over a very wide area, but principally in Asia and Europe. Some are believed to have been conceived with the purpose of luring devils into them so that they might never escape.

More examples can be found in the observations.

I have a number of observations which show example labyrinths, some so simple they were unlikely to have ever been used as tests in any Mystery religion.  Their use is partly a training aid in understanding the levels and layers, but by walking them a person may have been helped in inducing trance by suppression of learning.  In this case they would have been used in the method known as Walking the Labyrinth.  So here we have confusion - in essence we have two sorts of labyrinth - one vast and maze like, the other relatively simple and having a different symbolism and function, much of it related to the spiritual path.

Modern labyrinths are of the latter simpler type and have also been constructed without, one suspects, any understanding of the original option.  Switzerland has a number based on the Baltic wheel pattern – see picture below. 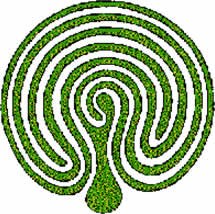 Most early training labyrinths were open to the air, their walls marked by stones.

The Celts had labyrinths – Glastonbury Tor once had its own Labyrinth. A seven tier labyrinth was created on the slopes of the Tor forming a twisted spiralling path up to the summit.  Native American Indians made labyrinths both on the ground and depicted in pottery and basketware.

They can be found in northern Europe, in the UK, and in central Europe [where they were they were turf-walled].  There are numerous labyrinths in India, in North America, South America and Australia.  There are Siberian labyrinths, often found close to dolmens, but these may have been of the more complex type.

Well over 500 non-ecclesiastical labyrinths have been found in Scandinavia. These labyrinths, generally in coastal areas, are marked out with stones.  There are stone labyrinths on the Isles of Scilly.

In essence, physical labyrinths of the simpler type are found world-wide.  But those used in the Mysteries of the complex type are fewer in number.

A Dictionary of Symbols – J E Cirlot
...Waldemar Fenn suggests that some circular or elliptical labyrinths in prehistoric engravings – those at Pena de Mogor, for example – should be interpreted as diagrams of heaven …. [ a map that enables the spirit to]  seek out the way through to the centre.
There is an illustration in De Groen Leeuw by Goosse van Wreeswyk Amsterdam 1672, which depicts the sanctuary of the alchemists' lapis, encircled by the orbits of the planets, as walls, suggesting in this way a cosmic labyrinth.
To trace through the labyrinthine path of a mosaic patterned on the ground was once considered a symbolic substitute for a pilgrimage to the Holy Land. 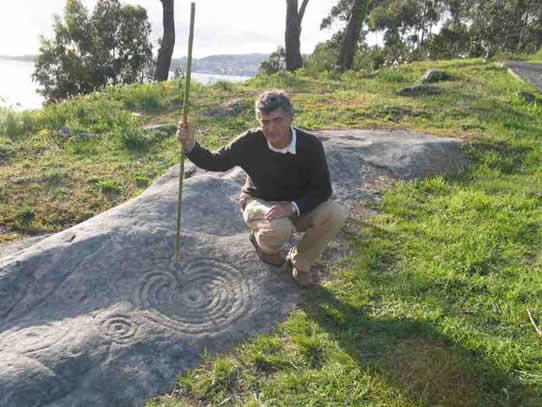