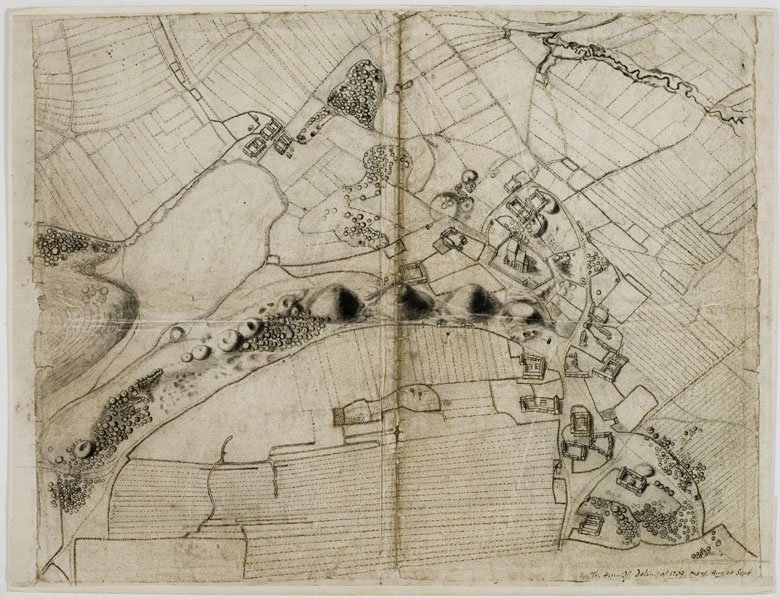 The Ynglinga saga compiled in Heimskringla, is provided in separate observations.  In chapter 5, however, Snorri asserts that the æsir settled in what is now Sweden and built various temples. Snorri writes that "Odin took up his residence at the Maelare lake, at the place now called Old Sigtun. There he erected a large temple, where there were sacrifices according to the customs of the Asaland people. He appropriated to himself the whole of that district, and called it Sigtun. To the temple priests he gave also domains. Njörðr dwelt in Nóatún, Frey in Upsal, Heimdal in the Himinbergs, Thor in Thrudvang, Balder in Breidablik; to all of them he gave good estates."

In chapter 10, after Njörðr has died, his son Freyr comes to power and "he was called the king of Swedes and received tribute from them." Freyr's subjects loved him greatly, and he was "blessed by good seasons like his father." According to the saga, Freyr "erected a great temple at Uppsala and made his chief residence there, directing it to all tribute due to him, both lands and chattels. This was the origin of the Uppsala crown goods, which have been kept up ever since."

It was common practise for the Christian church to place its new church building over the site of the old pagan temple.  This served two purposes.  In the first place it was an act of desecration ensuring that no one would be able to visit their old place of worship without having to go into the new religion’s building.  The second purpose was that many of the old sacred sites were built over key telluric hot spots – a fact many wily churchmen knew, and they were thus reusing the power of the site.  The old altars were often in key positions and the old altars were often incorporated into the new buildings.

In 1926, Sune Lindqvist conducted archaeological investigations in Gamla Uppsala and discovered postholes beneath the church in Gamla Uppsala. Using ground penetrating radar and other geophysical methods, Price and Alkarp found the remains of what they interpreted as a wooden construction located directly under the northern transept of the medieval cathedral, and two other buildings, one of them a Bronze Age building, and the other possibly a Viking Age feasting hall.

Swedish archaeologist John Ljungkvist of the University of Uppsala has conducted several seasons of excavation on the site and has recovered evidence of the scale of what he describes as a royal palace.  With walls more than 30 foot high, enclosing an internal space of well over 2,000 square feet, it would have dwarfed any other structure in the land.  But sometime around AD 800 it was emptied and all precious objects removed.  It was then razed to the ground.

The carbonised stumps of the roof bearing posts were well preserved, also surviving were traces of the internal walls which had been lime washed.  He believes there to have been four entrances each fitted with massive double doors.  Carefully wrought iron spirals had been used to decorate the exterior. Iron nails from horse shoes were found inside the building.

The royal palace would hardly have existed on its own and further excavations nearby on a second man-made clay platform, revealed traces of all manner of workshops and storerooms.  The floor of one sparkled with hundreds of garnets, semi-precious stones resembling rubies, suggesting the workplace of a craftsman employed in the production of luxury jewellery fit for many kings and queens…. Nothing remains today but the raised platform – over 10 feet high above the surrounding farmland.  Only by looking at the nearby modern timber barn, and imagining it fitting inside the hall twice over can any hint of the past grandeur be created in imagination 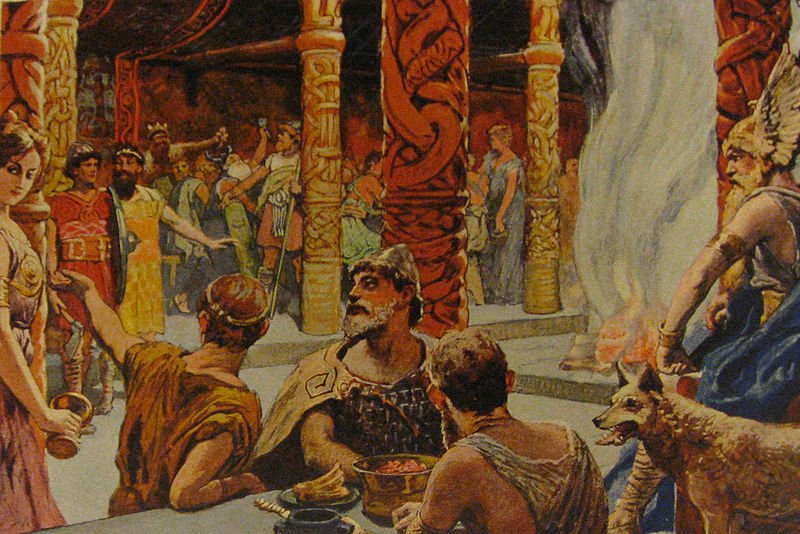 The Story of Burnt Njal From the Icelandic of the Njals Saga translated by the late
Sir George Webbe Dasent, D.C.L.  Extract from the refatory Note, and the Introduction, Abridged, from the Original Edition of 1861

The main building of the house was the stofa, or sitting and sleeping room. In the abodes of chiefs and great men, this building had great dimensions, and was then called a skáli, or hall. It was also called eldhús, or eldáskáli, from the great fires which burned in it.... It had two doors, the men's or main door, and the women's or lesser door. Each of these doors opened into a porch of its own, andyri, which was often wide enough, in the case of that into which the men's door opened, …. to allow many men to stand in it abreast. It was sometimes called forskáli. Internally the hall consisted of three divisions, a nave and two low side aisles. The walls of these aisles were of stone, and low enough to allow of their being mounted with ease, as we see happened both with Gunner's skáli, and with Njal's. The centre division or nave on the other hand, rose high above the others on two rows of pillars. It was of timber, and had an open work timber roof. The roofs of the side aisles were supported by posts as well as by rafters and cross-beams leaning against the pillars of the nave. ……………..There were fittings of wainscot along the walls of the side aisles, and all round between the pillars of the inner row, supporting the roof of the nave, ran a wainscot panel. In places the wainscot was pierced by doors opening into sleeping places shut off from the rest of the hall on all sides for the heads of the family. In other parts of the passages were sleeping places and beds not so shut off, for the rest of the household. The women servants slept in the passage behind the dais at one end of the hall. Over some halls there were upper chambers or lofts, in one of which Gunnar of Lithend slept, and from which he made his famous defence.

We have hitherto treated only of the passages and recesses of the side aisles. The whole of the nave within the wainscot, between the inner round pillars, was filled by the hall properly so called. It had long hearths for fires in the middle, with louvres above to let out the smoke. On either side nearest to the wainscot, and in some cases touching it, was a row of benches; in each of these was a high seat, if the hall was that of a great man, that on the south side being the owner's seat. Before these seats were tables, boards, which, however, do not seem, any more than our early Middle Age tables, to have been always kept standing, but were brought in with, and cleared away after, each meal. On ordinary occasions, one row of benches on each side sufficed; but when there was a great feast, or a sudden rush of unbidden guests, as when Flosi paid his visit to Tongue to take down Asgrim's pride, a lower kind of seats, or stools were brought in, on which the men of lowest rank sat, and which were on the outside of the tables, nearest to the fire. At the end of the hall, over against the door, was a raised platform or dais, on which also was sometimes a high seat and benches. It was where the women eat at weddings, as we see from the account of Hallgerda's wedding, in our Saga, and from many other passages.

In later times the seat of honour was shifted from the upper bench to the dais; and this seems to have been the case occasionally with kings and earls In Njal's time, if we may judge from the passage in the Saga, where Hildigunna fits up a high seat on the dais for Flosi, which he spurns from under him with the words, that he was "neither king nor earl," meaning that he was a simple man, and would have nothing to do with any of those new-fashions. It was to the dais that Asgrim betook himself when Flosi paid him his visit, and unless Asgrim's hall was much smaller than we have any reason to suppose would be the case in the dwelling of so great a chief, Flosi must have eaten his meal not far from the dais, in order to allow of Asgrim's getting near enough to aim a blow at him with a pole-axe from the rail at the edge of the platform. On high days and feast days, part of the hall was hung with tapestry, often of great worth and beauty, and over the hangings all along the wainscot, were carvings such as those which ... our Saga tells us Thorkel Foulmouth had carved on the stool before his high seat and over his shut bed, in memory of those deeds of "derring do" which he had performed in foreign lands. Against the wainscot in various parts of the hall, shields and weapons were hung up. …..

Now let us pass out of the skáli by either door, and cast our eyes at the high gables with their carved projections, and we shall understand at a glance how it was that Mord's counsel to throw ropes round the ends of the timbers, and then to twist them tight with levers and rollers, could only end, if carried out, in tearing the whole roof off the house…………..

Some homesteads, like those of Gunnar at Lithend, and Gísli and his brother at Hol in Hawkdale, in the West Firths, had bowers, ladies' chambers, where the women eat and span, and where, in both the houses that we have named, gossip and scandal was talked with the worst results. These bowers stood away from the other buildings....

Every Icelandic homestead was approached by a straight road which led up to the yard round which the main building and its out-houses and farm-buildings stood. This was fenced in on each side by a wall of stones or turf. Near the house stood the "town" or home fields where meadow hay was grown, and in favoured positions where corn would grow, there were also enclosures of arable land near the house. On the uplands and marshes more hay was grown.

Hay was the great crop in Iceland; for the large studs of horses and great herds of cattle that roamed upon the hills and fells in summer needed fodder in the stable and byre in winter, when they were brought home. As for the flocks of sheep, they seem to have been reckoned and marked every autumn, and milked and shorn in summer; but to have fought it out with nature on the hill-side all the year round as they best could. Hay, therefore,was the main staple, and haymaking the great end and aim of an Icelandic farmer.... ……. Hayneed, to run short of hay, was the greatest misfortune that could befall a man, who with a fine herd and stud, might see both perish before his eyes in winter. Then it was that men of open heart and hand, like Gunnar, helped their tenants and neighbours, often, as we see in Gunnar's case, till they had neither hay nor food enough left for their own household, and had to buy or borrow from those that had.