Many stone [and wood] circles are to be found in ‘henges’.  A henge is a prehistoric architectural structure that is intended to mirror the layout of the spiritual world. By having a physical representation of the spiritual world one could re-enact out of body experiences as well as provoke them.  It incorporates a great number of spiritual concepts.  It is:

Although the evidence is a bit weak, there appear to be reasons to believe that a ring of Fire representing the Fire level was also present when the site was used, clearly this is not going to show up unless the site is completely excavated in its interior and archaeologists look for charred wood [or bones – they burnt bones .. bonfires .. for symbolic reasons] .

Internal components may include:

In the henge, we thus have a huge number of symbolically important spiritual objects physically represented.

Avebury is the site of a large henge and several stone circles surrounding the village of Avebury in the English county of Wiltshire. It is one of the finest and largest Neolithic monuments in Europe, about 5,000 years old. Although older than the megalithic stages of Stonehenge 32 kilometres (20 mi) to the south, the two monuments are broadly contemporary overall.

The monuments comprise the henge itself;  associated long barrows;  stone circles, avenues, and a causeway enclosure. 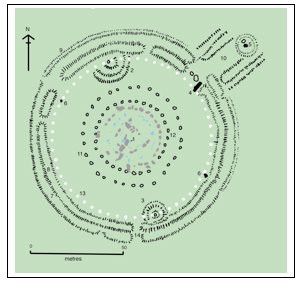 Stonehenge has two circles of stones with earthen embankments round it.  The site was multipurpose, it served as a form of astronomical guide, it symbolically represented groves of trees and there were also spiritual pathways leading to and from it.  It was a place of healing and burial.  Around the site there are also numerous single standing stones that could have functioned as symbolic portals.  The Heel stone on the Stonehenge site, for example, shown below is just one example. 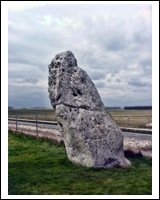 The UK is not the only place where such henges are to be found.  To give one additional example,  Zorats Karer -  also known as Karahunj (Armenian for singing stones), is a huge megalithic monument in southern Armenia.

The site is a combination of early-mid Bronze Age burial shafts and a large collection of standing stones (223 have been counted to date). The site is reminiscent of megaliths found in Britain, Iceland, Ireland and France's Brittany region but probably outdates the oldest of them by a thousand years.

A temple consisting of 40 stones built in honor of the Armenians’ main God, Ari, meaning the Sun, is situated in the central part of Carahunge. The stones are 0.5 to 3 meters in height and weigh up to 10 tones each. They were quarried from nearby river cliffs and carried to the site. The stones form an egg shape around a Bronze Age tomb and four avenues off the central part. Even greater than Zorats Karer's construction is its situation, for it runs along the edge of a ridge and is visible from many different directions .   Thus this site combines  symbolic portals, symbolic pathways, a possible sacred grove surrounding an egg and a symbolic hill or mountain.