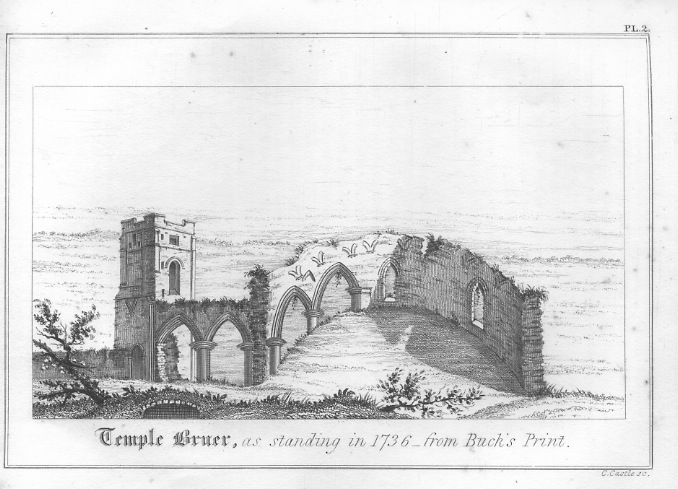 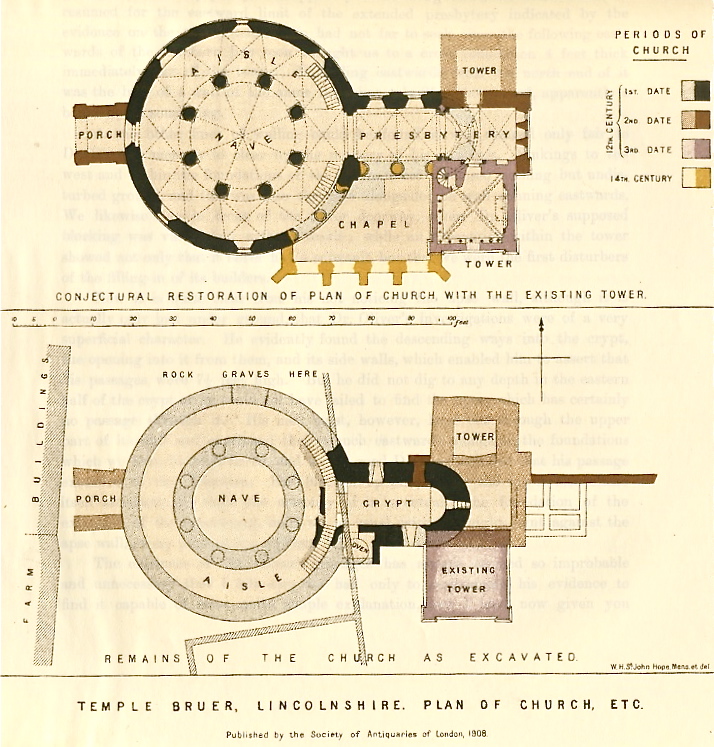 Temple Bruer Preceptory is in a farm-yard in the civil parish of Temple Bruer with Temple High Grange, North Kesteven, Lincolnshire, England. The ruin consists of the intact square south tower of the temple church, one of two added to the original structure during the Templars' tenure. The Preceptory Tower is currently in the care of Heritage Lincolnshire .

It is one of the few Knights Templar sites left in England where any ruins remain standing. Its name comes from its Templar ownership and its position in the middle of the Lincoln Heath, bruyère (heather) from the French language current at the time. It was founded in the period 1150 to 1160 and the order was dissolved in 1312.  Following the suppression of the order of Knight s Templar in France, Edward II followed in 1308 by sending John de Cormel, the sheriff of Lincolnshire with 12 knights and their forces to arrest the Templars at Temple Bruer. These included William de More, the Preceptor and Grand Master of the order in England. They were sent to the Tower of London.

The reason the site is of such interest probably both spiritually and historically is that the plans that emerged from the excavations of people like Dr Oliver in 1833 show that this was essentially a site that followed the symbolism of the Picts and their sacred geography.  It combines the symbolism of the isthmus, and its causeway with a wheelhouse and a tower.

Many buildings were added later, however, the original structure indicates clear links with the sacred geography of the Picts and the Ancestors in sites like Orkney.

Although Dr Oliver’s analysis and impartiality leave a lot to be desired, his plans are at least reliable.  The picture was muddied as a consequence of his prejudice against the Knights Templar and by the possibility he had encountered skeletons from a Charnel house in his excavations.

In 1908 William St John Hope, together with Col. Reeve of Leadenham Hall, and with the permission of Lord Londesborough, the owner, undertook extensive excavations on the site, which were a bit more revealing and helpful. Hope was a leading medieval archaeologist of the period and Assistant Secretary of the Society of Antiquaries. 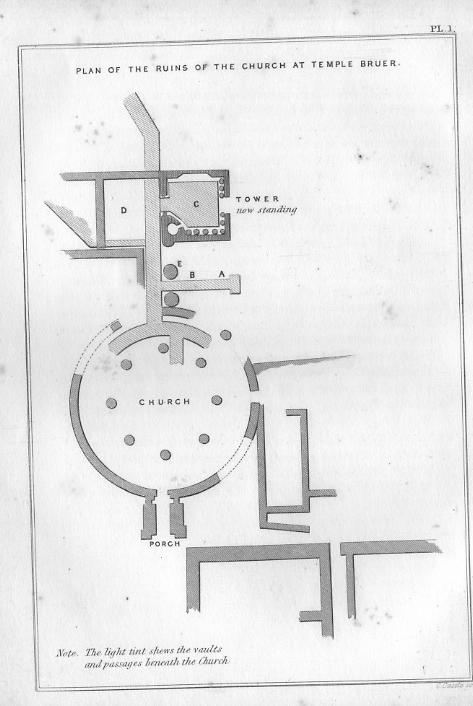 Hope was able to distinguish four phases of the development of the Preceptory. The first phase was the ‘church with a round nave’, about 15m in diameter, with a ring of eight columns, which distinguished a central area from an outer aisle. This was the original wheelhouse.

Needless to say their assumptions that this was a church and thus it would have a presbytery etc still resulted in errors, however, there are signs that a causeway linked a tower.

The later phases appear to date from a time when the Templars were not involved.  The northern tower survived as foundations, while the southern tower remains to its full height. The ground floor room of the tower is a rib-vaulted chamber with windows in three sides. This room has an impressive blind arcade on its west and south sides, with a stone bench beneath. This bench has had incorporated a double sedilia and piscina. The photographs published by Hope show that ruinous elements of the upper parts of the tower were extensively repaired at a later date.

Was it once round like the round towers of the Picts of  Ireland and Scotland?  Round towers are used to actually obtain spiritual experience via resonance.  Round towers in general may be found on telluric hot spots or they use the sun and cosmic radiation instead of sound.  Professor Callahan found that all the round towers he investigated were made of paramagnetic stone: that is stone that resonates positively in a magnetic field. But they also had dielectric (insulative) properties, they are able to store incoming cosmic electromagnetic/magnetic energy.

Round towers are usually free-standing, and often precede the buildings round them in date.