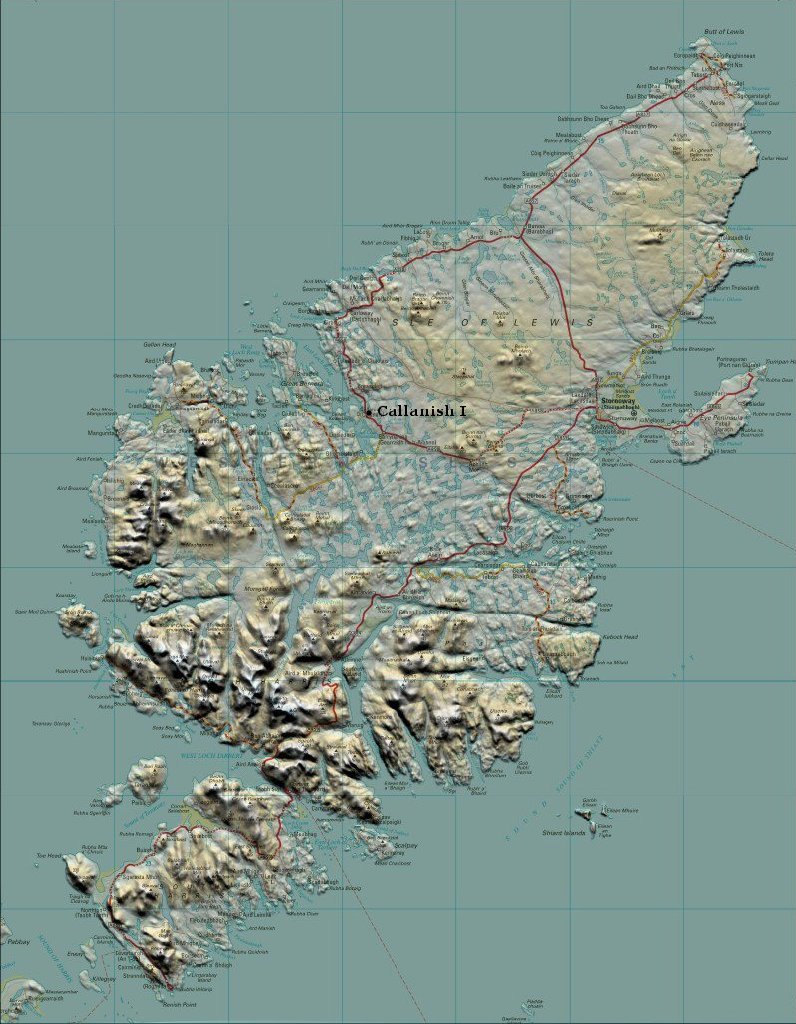 The Callanish Stones (or "Callanish I", Clachan Chalanais or Tursachan Chalanais in Scottish Gaelic) are an arrangement of standing stones placed in a cruciform pattern with a central stone circle. They are near the village of Callanish (Gaelic: Calanais) on the west coast of Lewis in the Outer Hebrides, Scotland.  The Stones were erected 5,000 years ago. They predate England’s famous Stonehenge monument, and were an important place for ritual activity for at least 2,000 years.

We have provided one entry for this site under the Ancestors as, according to archaeologists, they were erected in the ‘late Neolithic era’ and were a focus for ritual activity during the Bronze Age.  This, however, makes them Pictish monuments too, because as has been pointed out in the main section, a classification based on their metal working skills does not make them into different people.  The Picts worked iron and bronze, gold and clay, leather and eventually steel [in modern times], they were still Picts!  Since archaeologists have found pottery that dates back to about 2,200 BC at Callanish and some human bones were also found, no doubt they would say these were people of the Pottage or people of the Bone Age. 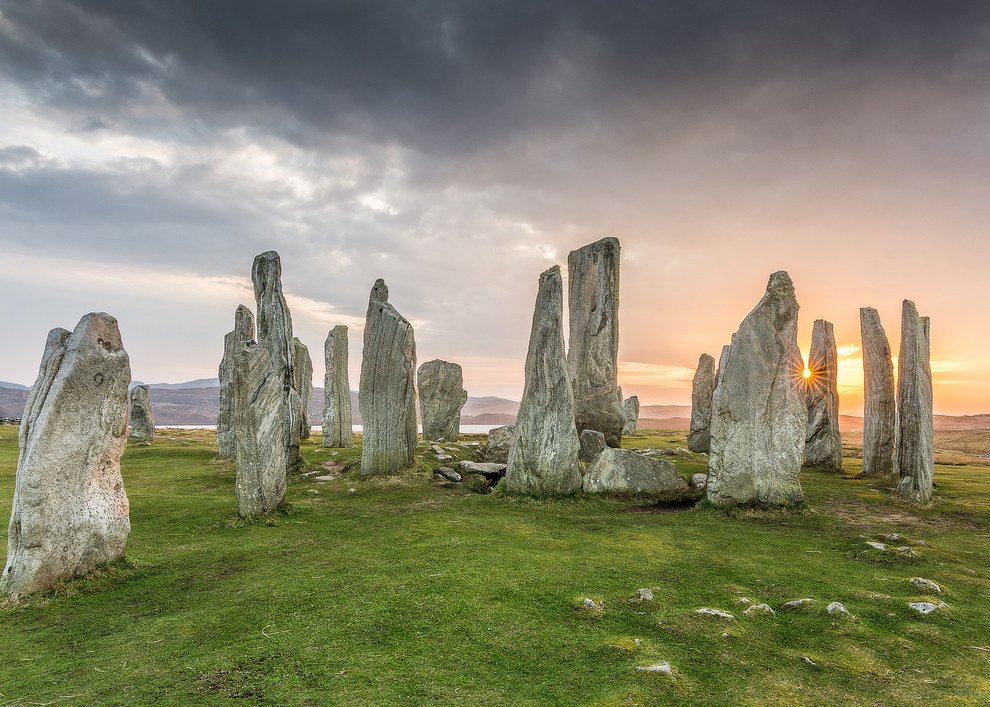 The Callanish I Stones are part of a very large complex of standing stones and stone circles of which Callanish I is the focus.  Furthermore the overall area has a whole spectra of buildings - barrows, mark stones, crannogs and brochs, such as the Broch at Dun Caroway on a very prominent hilltop site about 5 miles from Callanish I.

Archaeologists usually refer to the main monument as "Callanish I", because there are several other megalithic sites in the vicinity:

There are many other sites nearby; not all are now visible. There was, for instance, a timber circle 0.5 km south at Loch Roag.  Numerous other ritual sites lie within a few miles, - several arcs, alignments and single stones; many visible from the main site. The most impressive – Callanish II and Callanish III – lie just over a kilometre southeast of the main Callanish Stones, and originally consisted of circles of stones at least eight in number.  There are at least 11 smaller stone circles surrounding Calanais. Some of these date from much later than the central circle, which indicates the complex was being enlarged and developed for several centuries.

These are crucial to help with the understanding of the significance of this area, and how the landscape was used by prehistoric people.  The existence of other monuments in the area implies that the Callanish area as a whole was an active focus for prehistoric religious activity for at least 2000 years and that Callanish I was the centre of the area, the absolute focal point. 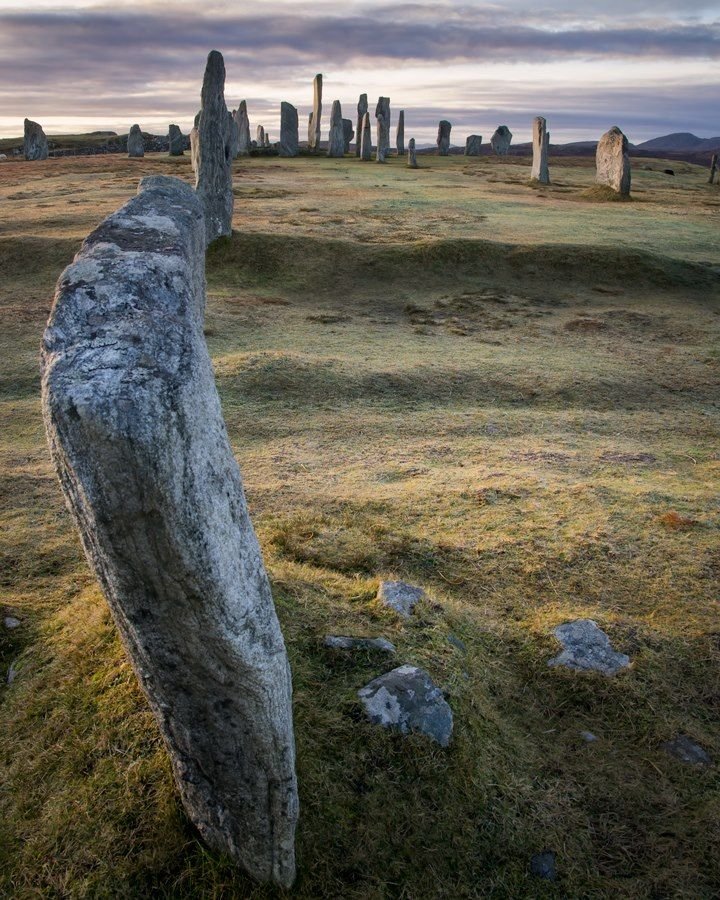 Today Callanish I is situated on what is now a low ridge above the waters of Loch Roag with the hills of Great Bernera as a backdrop.  Even today, it is easily visible from land and sea for miles around.

But we need to take ourselves back in time to see the way the site must have appeared when it was built.  At the time the climate would have been better and sea level lower, probably much lower.  From Callanish I, the people may have looked out over wide plains to the west, and the site and all its outlying sites may have been very visible from the plains.

Historic Scotland website
The Western Isles would have been a lot warmer 5,000 years ago, and food and wildlife plentiful. The extensive ritual landscape around of which Calanais is a part, speaks of a thriving and sophisticated society.  The form of the site and the artefacts found during excavation also show that this community was part of a wider culture …that involved the construction of earthen enclosures known as henges and impressive circles of timber or stone.

When the climate changed and the sea rose [and as we have seen in the main description the land sunk], the people of the plain had to leave their homes and travel inland to make a living and find food.  Furthermore the site would have appeared to sink lower and lower as the sea gradually kept nearer.  This major centre lost its congregation and its prominent position.  In sadness and sorrow, its priestesses levelled the area inside the circle to maintain its sanctity and abandoned the site.  Over time, between 1000 and 500 BC, the site gradually became covered with peat.

It was only the peat cutting around the site in 1857 that revealed the true height of the stones. Historic Scotland say “it is possible that there’s plenty more archaeology sealed beneath the peat that covers much of the Western Isles”.

We believe Callanish Stones to have been a citadel.  The site is shaped like the Cosmic Egg with a central cross of stones, and this symbolism denotes a place of very high potency as well as a truly sacred site - the – site of the Sun or the Moon – the Creator or the Created.

Mystic societies are supporters of the feminine.  They have High Priestesses, not priests.  And we believe this is a sacred shrine to the Moon – symbolically the ‘Created’ and in a sense the Earth Mother.

The ‘Sleeping Beauty’, also known as the 'Cailleach Na Mointeach', is a spectacular skyline of a woman's prone form seen to the north east from the standing stones of Callanish.  Patrick Ashmore, who excavated at Calanais in the early 1980s wrote that: ‘every 18.6 years, the moon skims especially low over the southern hills. It seems to dance along them, like a great god visiting the earth. ‘  Or even a goddess. 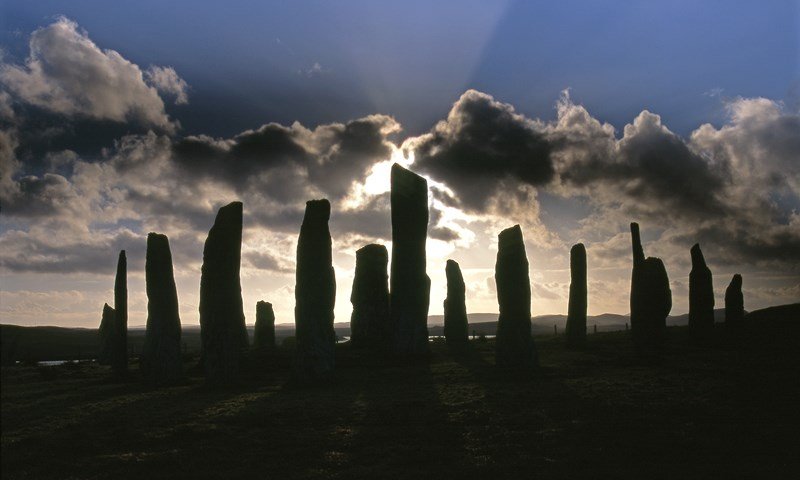 The View over Atlantic – John Michell
The historian of the first century ac, Diodorus Siculus, refers frequently to the relationship between the Hyperboreans, usually taken to be the inhabitants of Britain, and the Greeks, and in one well-known passage he describes Greek visitors to Britain leaving behind 'costly votive offerings bearing inscriptions in Greek letters'. 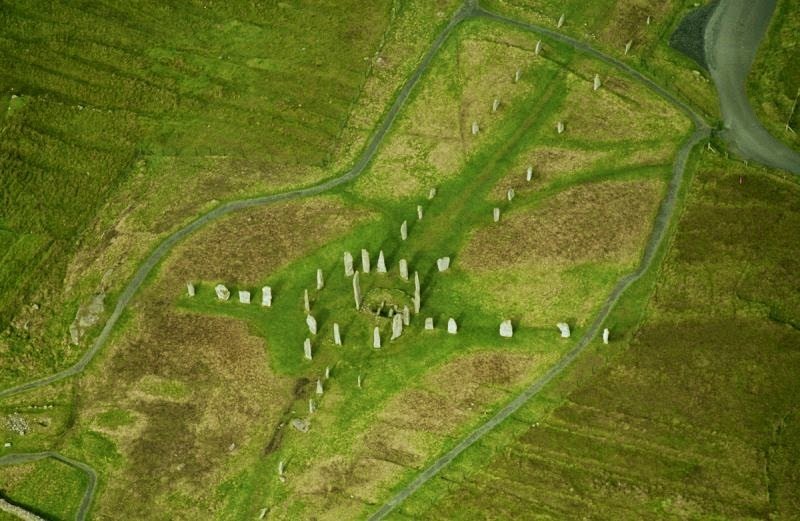 Citadels and other key sacred sites were egg shaped and had either paths or stones marking a cross.  At the centre of the cross was symbolically the ‘Unmoving Mover’, and thus it would have been the holy of holies for any pilgrim going there.

In Callanish I there is a huge central stone, with three rows of smaller stones running away to south, east and west along with an avenue which today comprises 20 stones and runs to the north.

Aubrey Burl in his book “Circles of Stone The Prehistoric Rings of Britain and Ireland“, mentions Diodorus Siculus, the famous Greek historian who died some time after 21 BC, who wrote of a ‘spherical temple’ in Britain where ‘the moon as viewed from this island appears to be but a little distance from the earth’ again referring to the southern moon’s behaviour at Callanish, where it seems “to roll along the top of the skyline”.

The Callanish Stones are all of the same rock type, namely the local Lewisian gneiss. Within the stone circle is a barrow to the east of the central stone.

The central monolith is 4.8 metres high, 1.5 metres wide and 0.3 metres thick. The largest sides of the stone are almost perfectly oriented to the north and south. The monolith has the shape of a ship's rudder and probably weighs about seven tonnes. 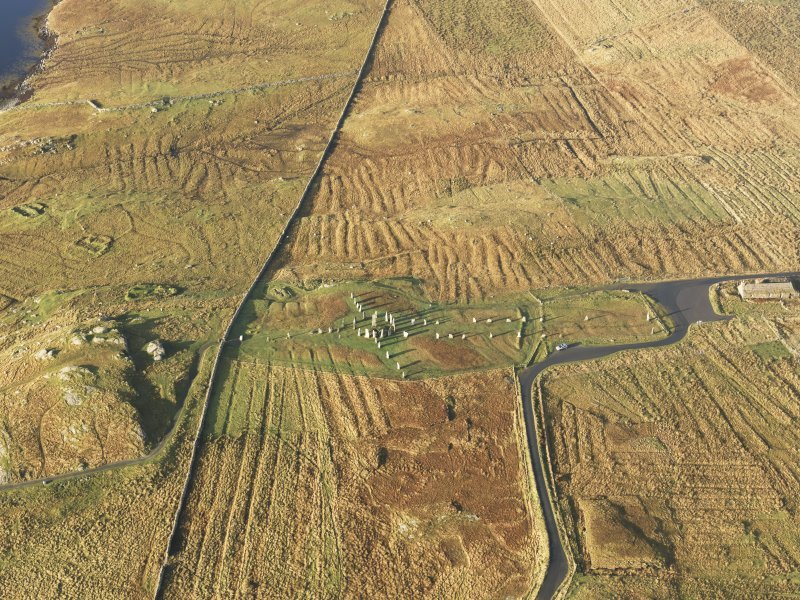 Although the site itself is Egg shaped, the stone circle consists of thirteen stones and has a diameter of 11.4 metres.   This may mean that theirs was a lunar calendar.   The stone circle is not a perfect circle, but is a ring with a flattened east side (13.4 metres north-south by 12 metres east-west). The stones have an average height of three metres. The ring covers an area of 124 square metres. This is quite small compared to similar circles, including the nearby Callanish II which is 2.5 times as large.

The avenue connects to the stone circle from the north-northeast and is 83.2 metres long.  The avenue has 19 stones remaining: nine stones are on the eastern side, ten on the western side. The largest stone is 3.5 metres high and stands on the western end of the row. The two rows are not exactly parallel to each other but fan out: at the north end the rows are 6.7 metres apart, while the distance between the rows is 6 metres at the south end. From the circle the height of the stones decreases towards the middle of the avenue; from there the height increases again. The stones of the eastern side of the avenue have only three-quarters of the height of the stones on the western side. 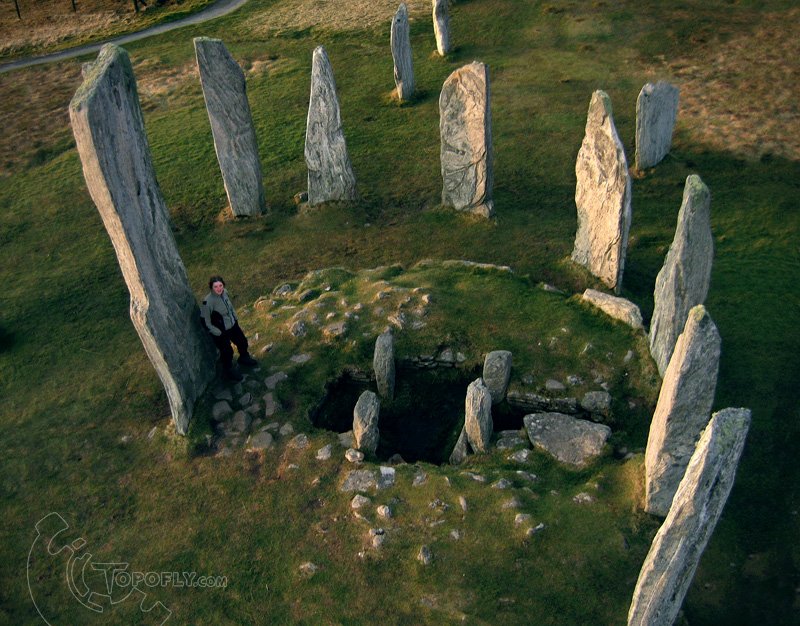 Between the central and the eastern monolith of the stone circle is a chambered barrow 6.4 metres long. This was built later than the stone circle and is squashed in between the eastern stones and the central monolith.  The archaeologists have called this a tomb, but have no reason to do so.  The chamber contained no bones, simply many pottery fragments that indicated the room was used for several centuries.  These pottery fragments included not only the local Hebridean pots, but numerous sherds of beaker vessels (dating to around 2000–1700 BC) and sherds of grooved ware.

Barrows were used for major initiation ceremonies such as rebirth and annihilation, and a site such as this would have been reserved for revered priestesses or religious figures.  All the pottery may indicate is that the initiate was supplied with food and drink as he underwent his 3 days of ‘burial’.

Between 1000 BC and 500 BC, around about the time the site was abandoned due to climate change and sea level rises, the stones were covered by a thick layer of turf, the protection of a sacred place from intruders. It is estimated that the place was abandoned around 800 BC.  Only in 1857 was the overlying 1.5 metres of peat, that had accumulated over the years, removed.

It is said that early on midsummer morning an entity known as the "Shining One" walks the length of the avenue, his coming heralded by the call of the cuckoo. 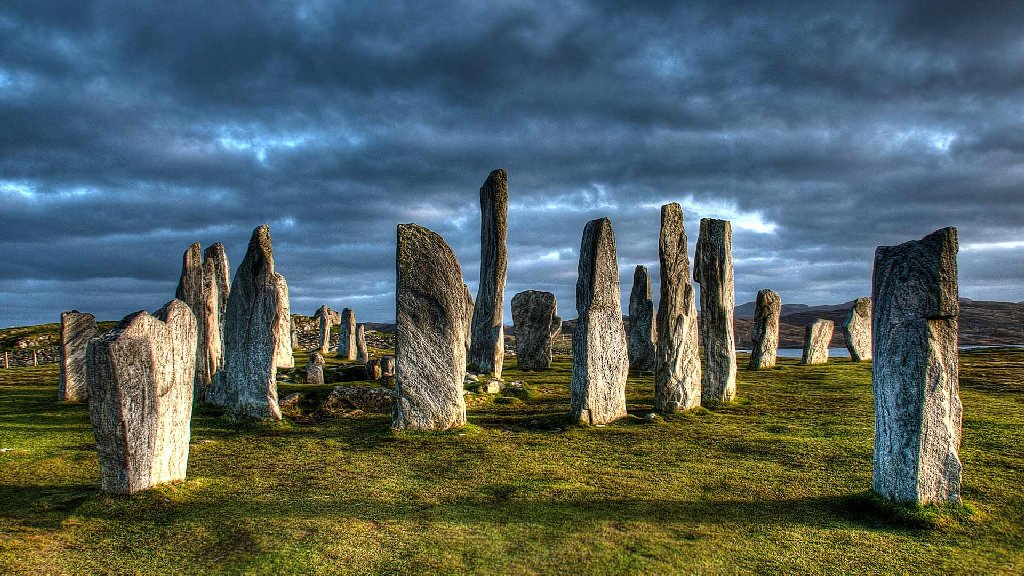