The source was a combination of National Trust and Wikipedia, as well as various astrogeological sites.

The stone circle at Castlerigg  is located near Keswick in Cumbria, North West England an area known as the Lake District.

Castlerigg is one of well over 1,300 stone circles in the British Isles and Brittany, and is roughly dated to megalithic era that lasted from 3,300 to 900 BC.  The Lake District alone has an estimated 500 stone circles, as such the figure mentioned above is a very conservative one.

The circle was probably constructed around 3200 BC (Late Neolithic/Early Bronze-Age), making it one of the earliest stone circles in Britain and possibly in Europe. It is important to archaeoastronomers who have noted that despite the possible movement and realignment of stones , the  stones in the circle have been aligned with the midwinter sunrise and various lunar positions.  The ‘official’ number of stones, as represented on the National Trust information board at the monument, is 40.   At one time, therefore there may have been two circles – the outer one for the 12 Signs of the zodiac the 24 stones for the Hours of the Spiritual Path and the Inner for the seven Planets, along with mark stones for the Elements.

The stones are glacial erratic boulders composed of volcanic rock from the Borrowdale Volcanic Group. Castle Rigg sits on a deposit of glacial till.  The stones are set in a flattened circle, egg shaped measuring 32.6 m (107 ft) at its widest and 29.5 m (97 ft) at its narrowest. The heaviest stone has been estimated to weigh around 16 tons, although the majority of the stones are buried by years of accumulated vegetative growth.   There is a 3.3m wide gap in its northern end, meaning it was not only a northern entrance, but also approached from the north.  In the symbolism of the cosmic egg the north is symbolically the place of Rebirth and ‘the Dark Night of the Soul’.

Of Riggs and Cosmic Eggs 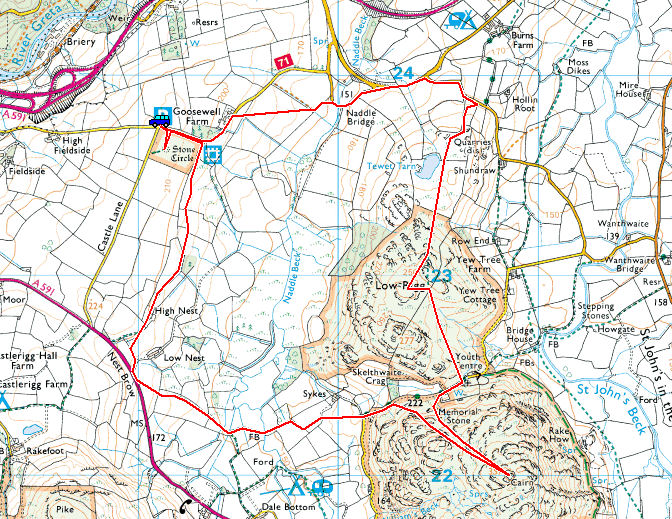 As a symbolic site, the Lake District as a whole is extremely well blessed.  At the time these circles were constructed, the sea would have been a lot lower and the Lake District with its egg shape and massive mountains would have formed a beacon for many miles away.  In essence, they would have appeared to have been like a great cosmic egg.

Castlerigg circle is not only egg shaped itself, but  is the north entrance to a vast curved egg shaped plateau of land.  The stone alignments point towards the raised centre of the plateau – a hill called High Rigg.  High Rigg occupies an unusual position, surrounded on all sides by higher fells but not connected by any obvious ridge. This plateau and High Rigg itself forms the raised centre of a natural amphitheatre created by the surrounding fells and from within the circle it is possible to see some of the highest peaks in Cumbria: Helvellyn, Skiddaw, Grasmoor and Blencathra.

Mountains are symbolically equal to Intelligences, especially mountains as high as these, thus we have an exceptionally significant symbolic ring of mountains .

Thus an egg shaped ring of mountains has as its centre – the symbolic Unmoving Mover.  To make the symbolism that much more exciting, High Rigg is divided into two with a small pass dividing what would have symbolically been the Sun and the Moon [Creator and Created] – and indeed the alignments from Casterigg stone circle are based on sun and moon alignments. 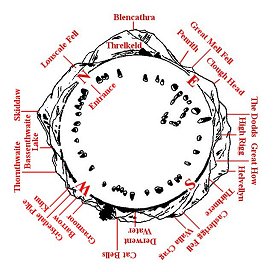 The two Sun and Moon tops are High Rigg at 1,171 ft (357 m) respectively and Low Rigg at 836 ft. A church has been built over what must have been a key initiation site and there is a 'pass' between the Sun and the Moon.  High and Low Rigg are surrounded by two rivers/streams – the essential water element – the river Greta.  There is also a lake known as Tewfit Tarn, this shallow pool stands on a shelf, overlooked by higher rocks.

High Rigg resembles a model of the Lakeland Fells in miniature, adding to the idea that Eggs occur within Eggs.

The word Rhigg has considerable significance within sacred geography – please see the entry for Rhigg for a full explanation.

Below:  Nine Standards Rigg near Kirkby Stephen offers 360 degree views across north-west England. Here we see another use of the word Rigg and also some very nicely shaped eggs.  Nine is a symbolic number , the Nine levels are all in the Aether level and consist of the seven symbolic Planets,  the Stars and the Milky Way, plus the Ultimate Intelligence. 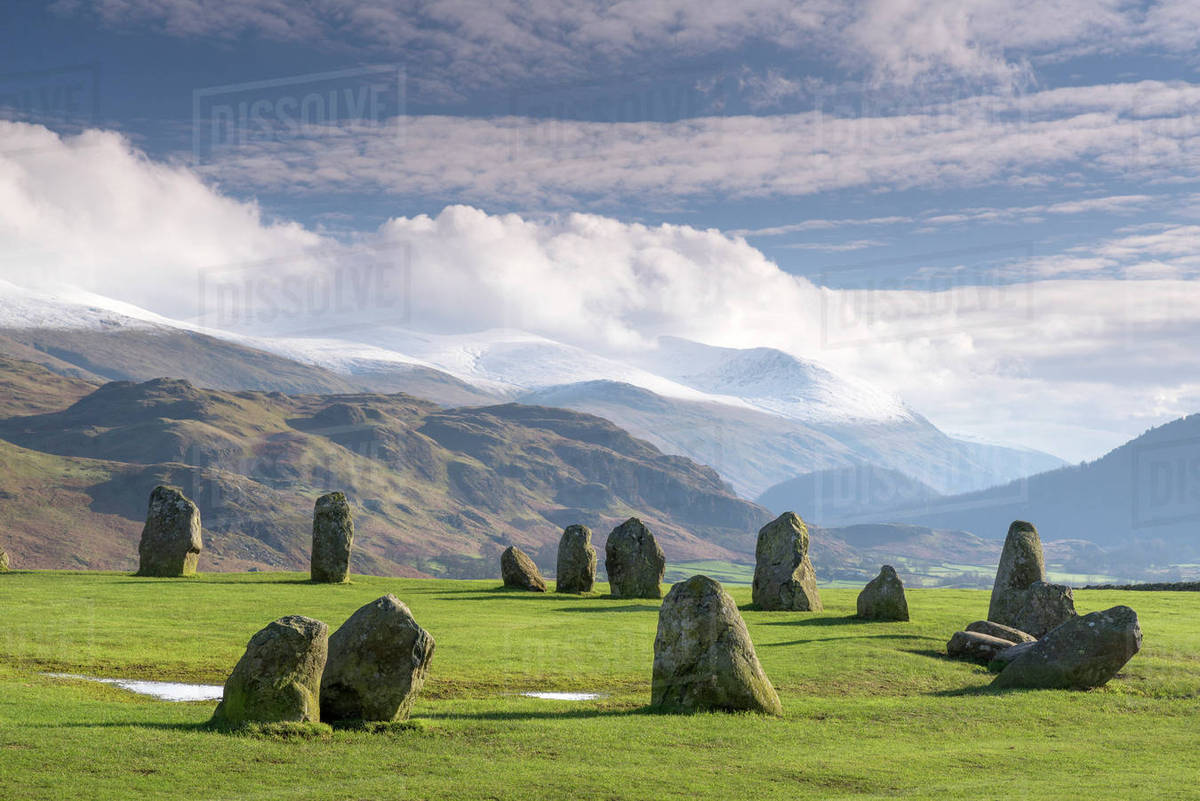 It was not until the early 18th century that Castlerigg came to the attention of the wider public, when William Stukeley (1687–1765) visited the site, in 1725.  Stukeley's account of his visit to Castlerigg is brief and was published in his Itinerarium Curiosum in 1776, 11 years after his death. And in it he mentions yet more circles and a ‘grave’ which is still there

…for a mile before we came to Keswick, on an eminence in the middle of a great concavity of those rude hills, and not far from the banks of the river Greata, I observed another Celtic work, very intire: it is 100 foot in diameter, and consists of forty stones, some very large. At the east end of it is a grave, made of such other stones, in number about ten: this is placed in the very east point of the circle, and within it: there is not a stone wanting, though some are removed a little out of their first station: they call it the Carsles, and, corruptly I suppose, Castle-rig. There seemed to be another larger circle in the next pasture toward the town. (Stukeley 1969 Vol. II, 48).

If this was a site used for rebirth the ‘grave’ may have had much the same function as a ‘barrow’.  Please see the explanation for rebirth and what was done to initiates to help them become adepts.

Stukeley's observation of a second circle in the next field is a great revelation that places the stones at Castlerigg in a whole new light; this indeed – before it disappeared may well have been a barrow.  There is no evidence of it today, either above ground or in the observations of later scholars.

An early description of Castlerigg stone circle can be found in the 1843 book The Wonders of the World in Nature, Art and Mind, by Robert Sears. In the passage quoted below, Sears also quotes an earlier description of the circle by Ann Radcliffe (Mrs. Radcliffe).

"The Druidical Circle, represented in the accompanying plate, is to be found on the summit of a bold and commanding eminence called Castle-Rigg, about a mile and a half on the old road, leading from Keswick, over the hills to Penrith,—a situation so wild, vast, and beautiful, that one cannot, perhaps, find better terms to convey an idea of it than by adopting the language of a celebrated female writer, (Mrs. Radclifle,) who, travelling over the same ground years ago, thus described the scene: "Whether our judgment," she says, " was influenced by the authority of a Druid's choice, or that the place itself commanded the opinion, we thought this situation the most severely grand of any hitherto passed. There is, perhaps, not a single object in the scene that interrupts the solemn tone of feeling impressed by its general character of profound solitude, greatness, and awful wildness. Castle-Rigg is the centre point of three valleys that dart immediately under it from the eye, and whose mountains form part of an amphitheatre, which is completed by those of Borrowdale on the west, and by the precipices of Skiddaw and Saddleback, close on the north. The hue which pervades all these mountains is that of dark heath or rock; they are thrown into every form and direction that fancy would suggest, and are at that distance which allows all their grandeur to prevail. Such seclusion and sublimity were indeed well suited to the dark and wild mysteries of the Druids."

Elements
Planets, the
Sun and Moon