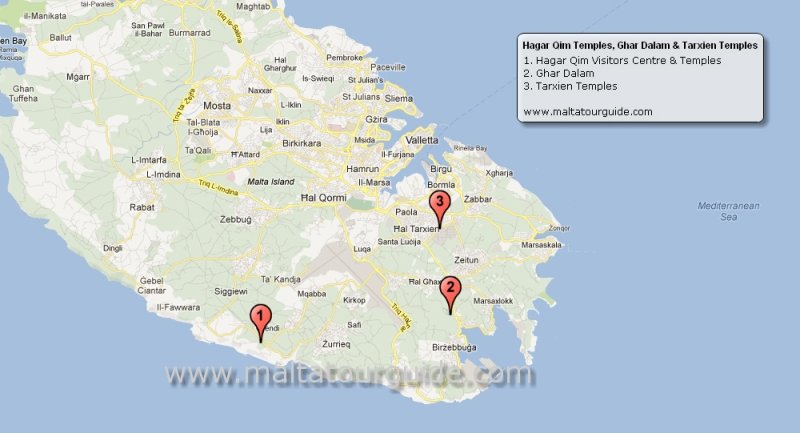 Ħaġar Qim is a megalithic temple complex, dating from the Ġgantija phase (3600-3200 BC).  It is classified as one of the Megalithic Temples of Malta, which are among the most ancient religious sites on Earth, described by the World Heritage Sites committee as "unique architectural masterpieces."  In 1992, UNESCO recognized Ħaġar Qim as a World Heritage Site.

The megalithic complex of Ħaġar Qim is located on the southern edge of the island of Malta, on a ridge capped in soft globigerina limestone.  Ħaġar Qim's builders used this globigerina limestone in the temple's construction. As a result of this, the temple has suffered from severe weathering and surface flaking over the millennia. Erosion has particularly affected the outer southern wall where the orthostats are exposed to sea-winds. In 2009 work was completed on a protective tent. 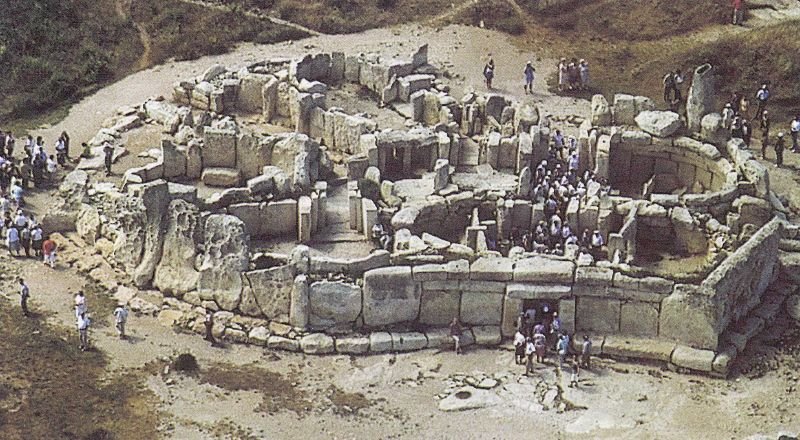 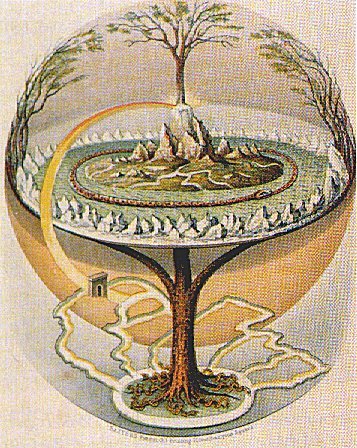 On 17 September 1949, three statuettes and several pieces of a much larger stone statue were discovered buried beneath a rectangular stone. The "Venus of Malta", which shares similar characteristics with the Ħaġar Qim statuettes, was discovered on 31 March 1950.  The finds tend to indicate that there was worship of the Earth Mother, and sexual techniques with High Priestesses may have been present.

Ħaġar Qim conforms to sacred architecture with its egg shaped complexes, and oval ‘islands’, similar to those found on T-O maps.  The large stones that form the Egg shaped outer wall are all symbolic mountains – large ‘cones’.  The western wall is about 20 metres long, curving in on itself towards the main temple and an outdoor shrine. The outside wall, built of huge upright blocks, projects inwards, thus creating an extremely solid building. 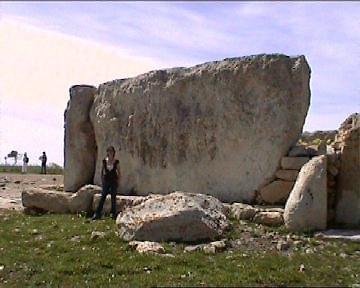 Menhirs are ‘mountains’ and the larger they are the more important symbolically is the god they represent, as such the implication is that this particular temple was dedicated to one of the principle gods in the pantheon.

A few hundred metres from the temple is one of the thirteen watchtowers built by Grand Master Martin de Redin, called Ħamrija Tower.

What also makes Ħaġar Qim somewhat unique in the overall group of Malta temples is the existence of   Il-Misqa (English: the Watering Place).  It is a flat area of bare rock atop a hill nearby the temple complex and contains seven bell-shaped reservoirs that still retain rain-water during any winter with an average rainfall. Of the seven, five wells hold water; the three wells which no longer hold water are the deepest and are joined as a single tank through subterranean channels.

Although the reservoirs may have had a practical use as a source of water, their symbolic use would have been far more important, as they symbolise sacred rivers and streams, sacred wells and sacred springs.  The number -7 – may also be significant – the Planets as a source of spiritual input.

An eighth well exists but is ‘blocked up by a mature fig tree’. The nature of the tre and the hole indicates that this was symbolic of the unmoving mover – the ‘centre’ of the wheel.  The fig was a very sacred tree to the Shaivists, representing the tree of life.  If we take a look at the Three World system and picture we can see that the Tree of Life has its roots deep into the third layer and obtains spiritual ‘water’ from the rivers and streams that water it, sucking it up and distributing it up towards the leaves.

The system employed by the builders of this complex was no accident and showed considerable sophistication in its design.  The water-channels cut in the surface of the rock distribute rain-water into the wells individually and the level of water in any well is kept relative to that of the immediately adjoining well. 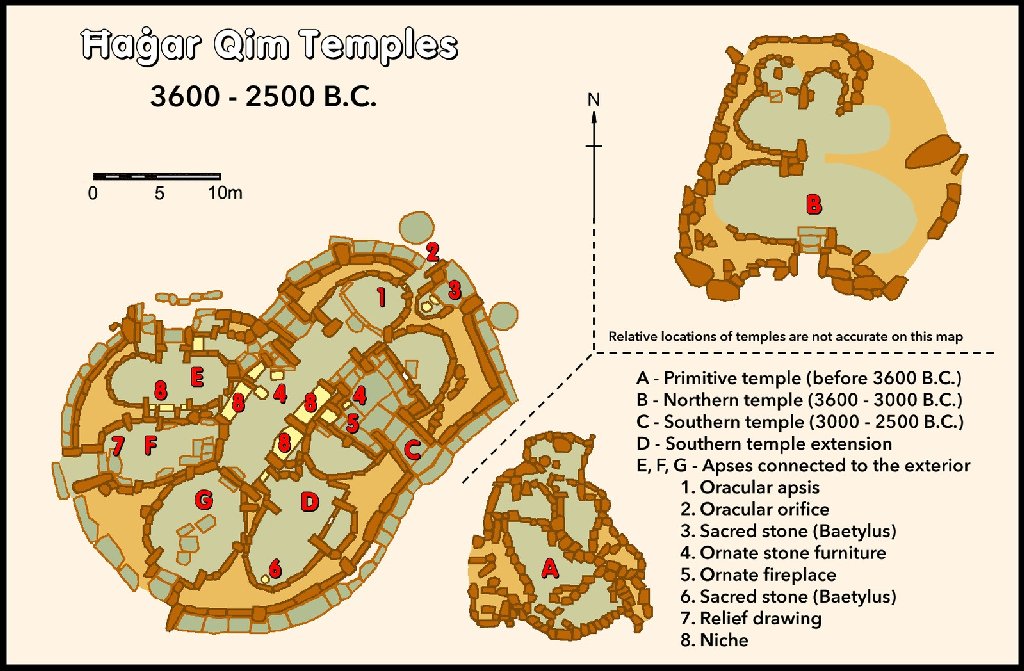 Ħaġar Qim shares its basic architectural design with the Mnajdra, Tarxien and Ġgantija temple complexes. The basic shape includes forecourt and façade, elongated oval chambers, semi-circular recesses and a central passage connecting the chambers. The overall  Ħaġar Qim complex consists of a main temple and three additional megalithic structures beside it.  The main temple was built between 3600 and 3200 BC; however, the northern ruins are considerably older.

The site has all the markings of a temple that increased in importance over the years. 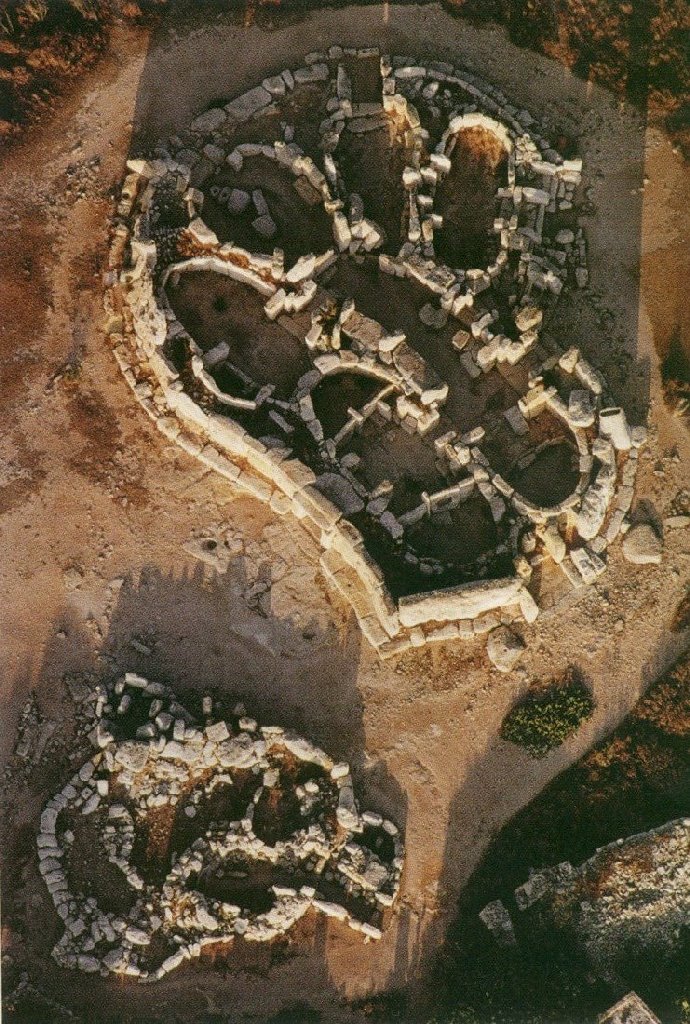 Northern Temple - The northern temple is the oldest part of Ħaġar Qim, containing an oval chamber with a semi-circular apse on each side. Following the second doorway is another chamber with similar apses.  The overall shape it may once have had is more difficult to see, but it has an Egg shape, with stones missing – possibly reused in the other temple.

The northern temple uniquely has three insulated layers of flooring. Due to the different methods used in polishing the stone, scholars have theorized that the three layers of pavement illustrate three major shifts in construction at Ħaġar Qim.  But it may also have been used as an acoustic space.  Resonance using sound is able to provoke spiritual experience.  Stone balls of different sizes are located alongside the walls of the northern temple and other parts of the structure.

The Northern Temple's first recess contains a round stone pillar and a rectangular slab held vertically ahead of the pillar. A pillar has a symbolic meaning.  In the Shavaism practised in India, it has become the lingum with the yoni.  Resting on the slab are spherical hollows ‘which may have served as holders in which to stand small libation jars’. Jars excavated from the site are characterized by a specifically oval base, designed to stand upright when placed in the slab.  In India, the lingum is ceremonially ‘watered’.

Remnants of the vertical blocks which once flanked the recess are still observable today. To the right of this chamber is another recess, containing an ‘acoustic opening’ somewhat reinforcing the idea of a resonant space.  The hole has also been linked to alignments of the Summer solstice.  It may thus have been used for rebirth ceremonies – 3 days of darkness and they were ‘born again’. 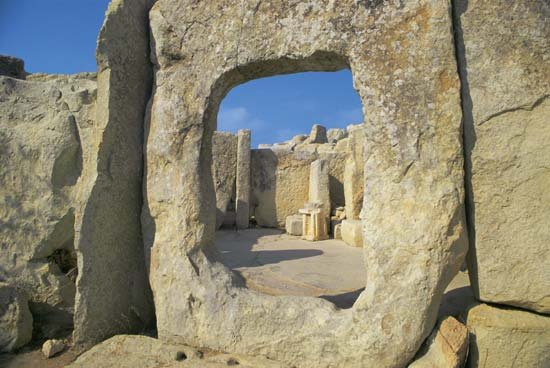 Main Temple – The main temple appears to have been required as a consequence of the growth in use of the site.  The temple’s façade is characterized by a trilithon entrance [twin pillars], outer bench [waiting to be called] and orthostats [hills/teeth/mountains etc]. A passage runs through the middle of the building which connects six large chambers. Looking at the plan, however, one can see that it is the Egg with a cross inside.  The area marked 1, 2 and 3 would have been the more ‘holy’ area.  This is thus Universal Man.

But why the five smaller eggs?  There is the very tantalising thought that the people of this temple knew not only of ‘Asia’, Africa’ and ‘Europe’ – the symbolic genetic and physical sub-groups of man, but also ‘Antartica’ and ‘America’.  But there may also be a more prosaic explanation, as “the entrance passage and first court follow the Maltese megalithic pattern but as building progressed, this design was considerably modified”.

Throughout the site there are the remains of fires and the bones of animals.  Archaeologists have assumed this means extensive ‘sacrifices’, but true Shaivistic practise required that whatever was killed to be eaten was treated with ritual respect.  They may have eaten what they killed, but they honoured the animal first – which is more than we do today.

Fire, darkness and flickering flame is also a most effective trance inducer.  The combination of flickering flames, the smoke of incense, and the ritual steady use of drum beats is an extremely common mechanism of becoming ‘possessed by the gods’  - and the large enclosure – the dance floor must have provided an ideal place for this to take place.  Beyond the temple entrance is an oval area 14.3 m (47 ft) long and 5.5 m (18 ft) wide with large slab walls, giving privacy and a more effective acoustic space. The central area is paved with well-set smooth blocks. 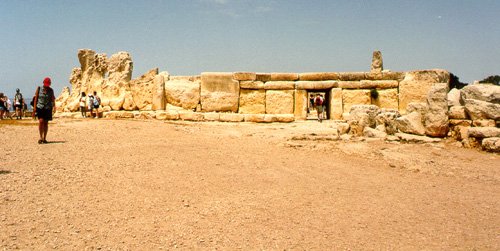