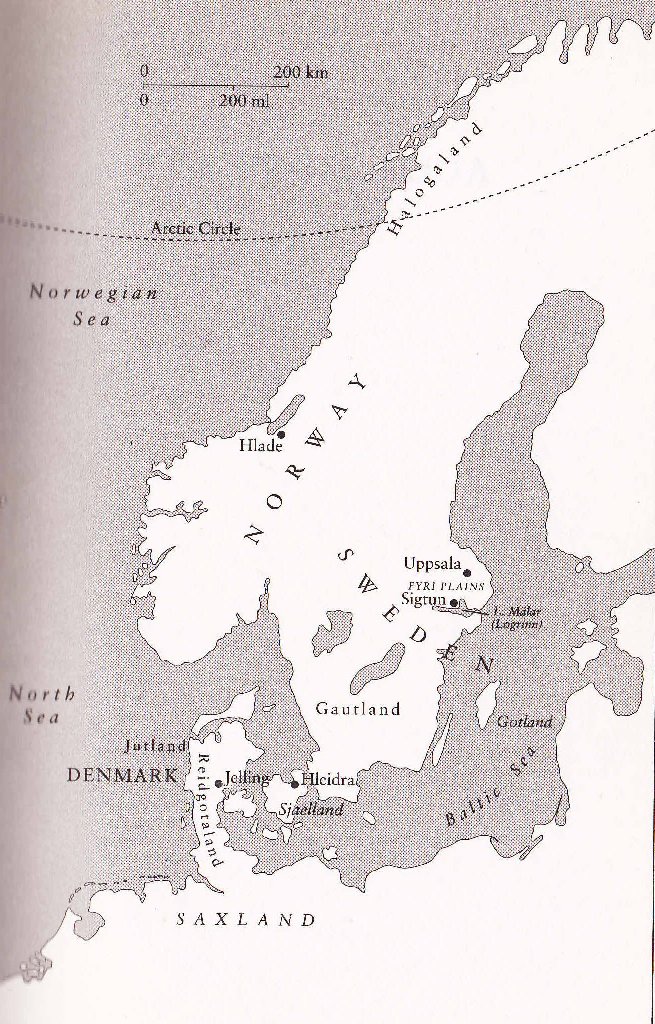 Jelling-the city of the kings

In the 10th century, Jelling was a very important part of Danish society.
First of all, the city was an official capital and this made Jelling a political centre of power in Denmark. Though Jelling was located in the central part of Jutland, by the old "Road of The Army", close to an exit across Lille Baelt (the sea between Jutland and Fyn, there was never much trading here around.

Jelling is known because of the two runic stones that stand outside the stone church. The two runic stones document that Jelling probably was one of the first Danish cities, that converted to Christianity. It was Harald Blaatand, son of Gorm the Old, who announced this upheaval, about 950 A. D. According to the new findings from the Sebbersund excavations, there are now indices pointing out Sebbersund as the very first Christian town in Denmark (look at the Sebbersund information sheet to study this matter).

Jelling is in addition also known for its two burial mounds and as a residence for more high ranked people.
When Svend Tveskaeg became king after Harald at the end of the 10th century A. D., he made Roskilde the new capital of denmark for unknown reasons - probably a demonstration of his power - he had fought his father, Harald Blaatand.

The kings and their graves

North of the church Thryra's hill is situated, and in the south, Gorm's hill is located. They are the greatest burial mounds, which have been found in Denmark.

In the middle of the hills, the two famous runic stones are standing. The youngest (and biggest) has been raised by Harald as a memento of his parents, Gorm and Thyra. The other one, which is a bit smaller, has been raised by Gorm as a memento of his wife Thyra. Gorm is the first known Danish king since 873. The runic stones confirm that Harald was his son and successor, and that his wife's name - the mother of Harald - was Thyra.

The Jelling stones show us, that Jelling was an important centre for both of the kings. When Gorm died, he was buried in the northern hill. But after his son's conversion, the body was moved and buried under the floor in the middle of the church, made of wood, which Harald built (now situated beneath the stonechurch). Recently, most of Gorm's skeleton was found. It shows, that he was about 40-50 years old when he died. He was about 172 cm tall, but he was not strongly built. After the examination of the rest of the bones it was declared, that he " like most of the middleaged Danes at that time suffered from osteoarthritis in the lowest part of the vertebral column". 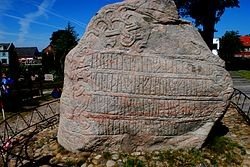 These monuments are a proof of Jelling being a very important city in the 10th century. These monuments are a very important historical source, when you discuss the christening of Denmark, because the name "Denmark" for the first time was written in Denmark, on the smallest stone. The inscription is: "Gorm the king made these runes after his wife Tyre, the penance of Denmark". The inscription of Harald´s stone says: "King Harald made these runes after Gorm his father and Thyre his mother, Harald who won Denmark all and Norway and christianised the Danes". A reasonable interpretation could be, that Harald in his governmental period won the present Slesvig-Holsten back to Denmark (from the Germans). 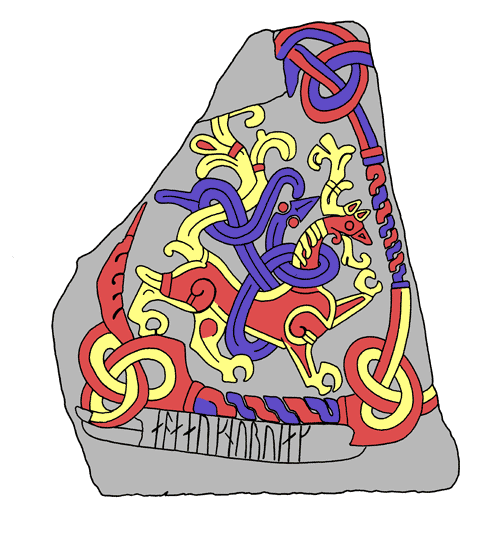 Or you can relate the inscription of Harald´s stone to the other archaelogical finds from that time, for instance the famous "Trellecastles" (Fyrkat and four others) - take a look at the information sheet about Fyrkat and Aggersborg. In that case, the inscription of Harald´s stone is telling us, that he built the "Trellecastles" as a method of gathering together the whole of Denmark ("...won Denmark all....").
During Harald´s reign, the Danes really were introduced to Christianity. But it is likely, that it was for political reasons: The king´s relationship to the neighbours south of the border became better.

The northern hill, also called The Hill of Gorm, is about 11 meter high and has got a diameter of 65 meter. 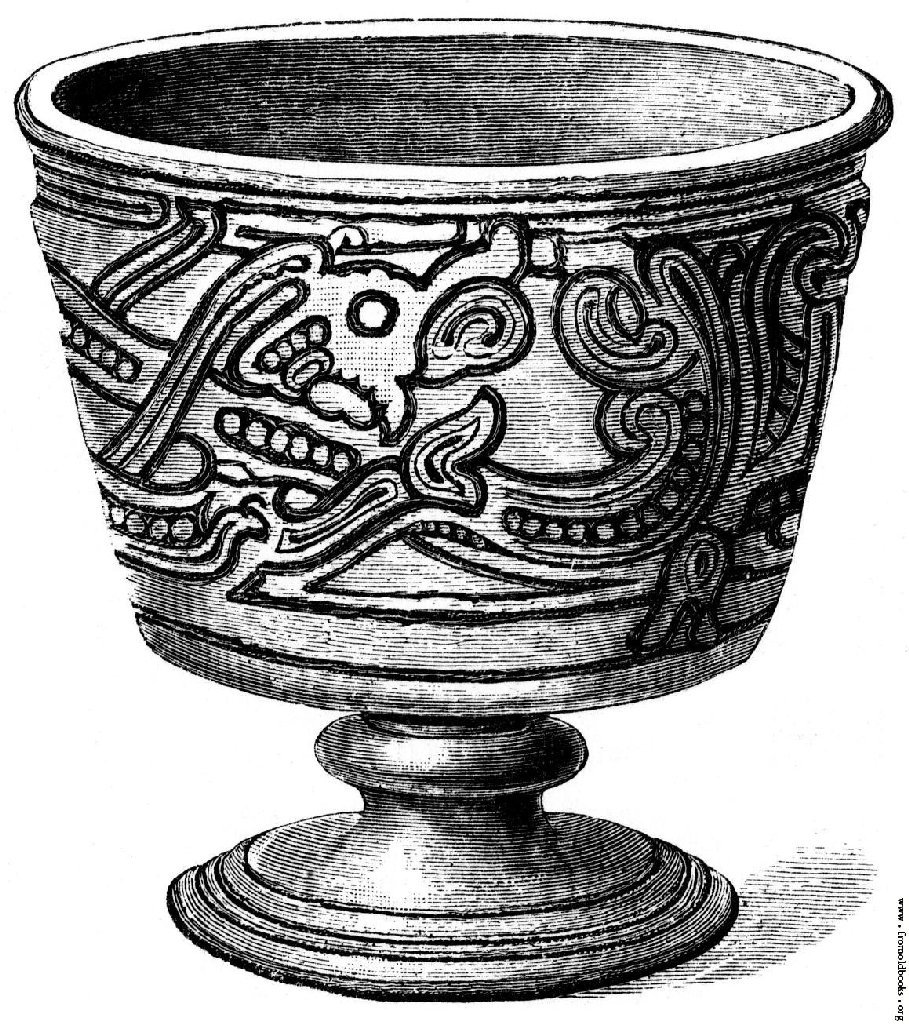 You can assume, that this hill is the last built, as Thyra died first. It was the Icelander Finn Magnusson who dug out the northern hill in the 19th century. It was at that time discovered, that the hill had been opened before. It was not done as an ordinary gravelooting, but as an organized robbery. The two roofbeams were broken down and afterwards repaired carefully. The only thing that was found inside the hill was a small silvercup, which is also called The Cup of Jelling. This cup has been used as a proof of the original burial of Gorm in this hill (the first burial of Gorm, perhaps 35 years before the Christianity was introduced officially by his son Harald), because the ornamentation of the cup corresponds with the ornamentation of the so called "Art of Jelling".

Harald Baatand´s stone is very conspicuous, because it is decorated with several impressive drawings, which for instance represent a snake that twines itself around a creature with a bird's head. This creature has got a very thin neck and a body of a cat, the claws of an eagle and a long tail, winding itself around the animal's neck and breaking out of it's beak. Also, the front of the stone itself is dominated by a peculiar drawing, which in our opinion shows the crucifixion of Jesus Christ [my note: see Hanged god]. Most scientists agree on that, but a few people interpret this picture as being a knight, showing the chivalry of Harald.
Harald´s aim with this famous stone is uncertain, but everything seems to show that he made it as a symbol of his power. The stone's inscription says, that he was the one who controlled Denmark and Norway, and that he christianized the Danes. We think that it is quite impossible to convince a whole people, that their religion is wrong, and that they have to worship Jesus Christ, especially when Gorm the Old a few years earlier was a follower of Nordic gods as Odin and Thor. The Danes must have become Christians over a long period, but Harald has surely done a great piece of work, when he as the king of Denmark stood up in front of his pagan people and declared himself for being a Christian.

The gods of the pagan people and the introduction of Christianity

In The Viking Age, people believed in Odin and Thor. Odin was the head of the Nordic gods and determined the declarations of wars. It was likewise he, who decided, who should win and lose, when people in Midgaard (on Earth) were in fight. People believed, that he was watching every fight, and the fighter who won was Odin's favorite. The Vikings preferred to be killed in fight. It wasn't good for a man to die at home in bed and suffer the so called "strawdeath", which meant that one had to lie in his bed and dies of sickness. This way of dying opened the door to The Land of Loke's Daugther - Hel -, a very horrifying place to be. If you on the other hand got killed in warfare, you would enter Valhalla and become one of Odin's warriors. These warriors were called "einherjer", and every single day they fighted, and when it became eveningtime and they were tired, they went at home (to Valhalla) and eat and got drunk [sic].
Thor, Odin's son, was the God of heaven and a master over thunder and lightning. When there was thunder in the air, people believed that it was because of Thor, driving his wagon. In front of the wagon were two strong bucks, Tangnojost and Tandgrisner. Thor was also the strongest of the gods, and therefore, he alone fought the giants ("jaetter"), the enemies of the gods. Thor had a brilliant weapon: The hammer Mjoeldner, which always hit whatever Thor aimed, and returned to his hand after the throw. Because of that, the vikings thought that the giants and other evil creatures shaked of fear when Thor appeared at the battlefield, because they knew that Mjoeldner was going to kill them. Should it anyway happen, that a special foolhardy giant went to attack, Thor buckled his belt Megingjor and therefore doubled his power, and no one could beat him.
Other gods, who lived in "asgaarad" (The country of The Gods) were: The gods Frej and Freje, who were the gods of fertility. The goddess Idun, who's golden apple brought the people constantly youth, when they eat them. And finally there was Loke, originally from a giant generation. Loke was the god of cunning and slyness. He made a lot of accidents. Loke had three children with a giant-woman called Angrboda. The first was a enormous wolf called "The Fenriswolf", the second was a poisonous snake called "Midgaardsormen" which lived in the ocean and was so long that it crossed the world. The third child he got with Angrboda was Hel, the goddess of death.

About 1000 years ago, clergymen from the south came to Denmark, Norway and Sweden. With them, they brought the believe on Jesus and God. They built churches and travelled around in Scandinavia, trying to convert the vikings to the new religon. In the begining, it did not go very well for the southern clergymen, because the most of the vikings, who lived in Scandinavia, had got their own gods and their own religion, and they did not want to hear, what the clergy had to tell them. Very often, they gave the Christian clergymen a miserable and terrible treatment. Sometimes they killed them, or they let them work as slaves.

But the clergymen took revenge.

After a number of years where they have had bad luck with converting the Vikings to the Christian faith, they begun to co-operate with some of the powerful Kings in the North. Perhaps the kings thought it was practical, if all their subjects converted to the new God. If, for instance, King Harald Blaatand converted into Christianity, he was free of the imperialistic policy of the pope and the people representing the German church in Hamburg and Bremen.
Together with the kings and their armys, the clergys gradually succeeded in converting the vikings to the new confession. When the royal power and the clergymen gathered their forces together (military and spiritually), it became illegal to believe in the old Gods, and those who kept on believing in them, was getting punished and sometimes even killed. 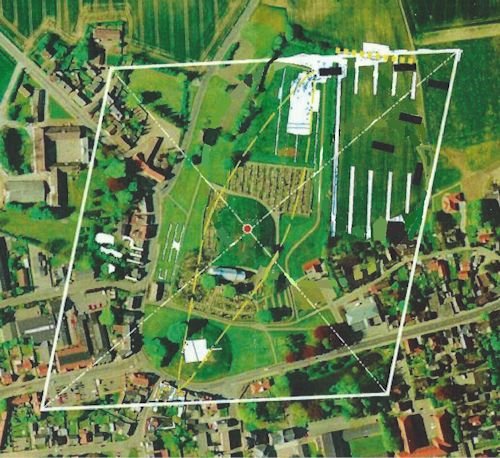