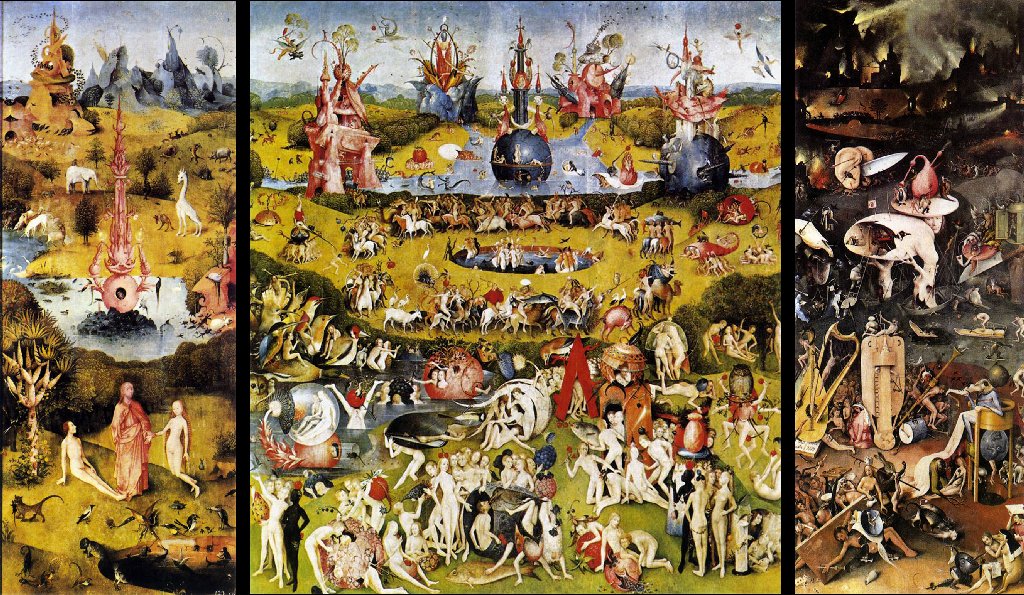 If we look at the Model of the Mind, which I have duplicated here for convenience, you will see it is divided

The Model is divided into three – the Subconscious, the Conscious and the Higher spirit:

The only route to our composer is via the Subconscious – the feminine side.

In all shamanic lore, including all the Mystic groups and systems - for example the druids and Celtic races, Hindu/yoga as well as the Shamanic and indigenous peoples, for example, Polynesians, Native America Indians, Siberian shamans, South American shamans, along with all the Mystery religions, there are three worlds – the upper world, the middle world and the lower world.   These correspond to the three partitions shown above and are often represented symbolically using the Triqueta.

These worlds are all capable of being visited within spiritual experience.

As we have seen, these worlds can be sub-divided further, [see the map of the Egg] however, the basic division remains a constant

Mircea Eliade – Shamanism Archaic techniques of ecstasy
According to the Besisi conception, the universe is divided into six upper regions, the earth and six underground regions; this shows a mixture of the old tripartite conception with Indo-Malayan cosmological ideas

Lower Subconscious world travel is via symbolic caves and underworld tunnels, middle Conscious world travel is out-of-body mirror world travel – the world is simply a mirror image of the physical.  The upper world is the world beyond the soul where one starts to ascend through the Planets and up to the Stars.  From a purely practical point of view the main realms of interest to shamanic peoples were the lower and middle realm because they gave you access to animal spirits [used for healing and finding food] and allowed you to survey territory.

Mystics, on the other hand, and those involved in the Mysteries were interested in the Upper realm.

Buddhist spatial cosmology
The vertical cosmology is divided into thirty-one planes of existence and the planes into three realms, or dhātus. These three (Tridhātu) are the Ārūpyadhātu, the Rūpadhātu, and the Kāmadhātu.

At one time many spiritually gifted people even drew maps of these three worlds.  The rest of this section will give you some examples

The Celtic three worlds — Upper, Middle and Lower  - were shown situated on the different levels of a tree. The upper world showed the tree crown and gave access to the gods and spirit helpers.  From there the whole universe, worlds of other planets and other levels of 'consciousness were accessed. 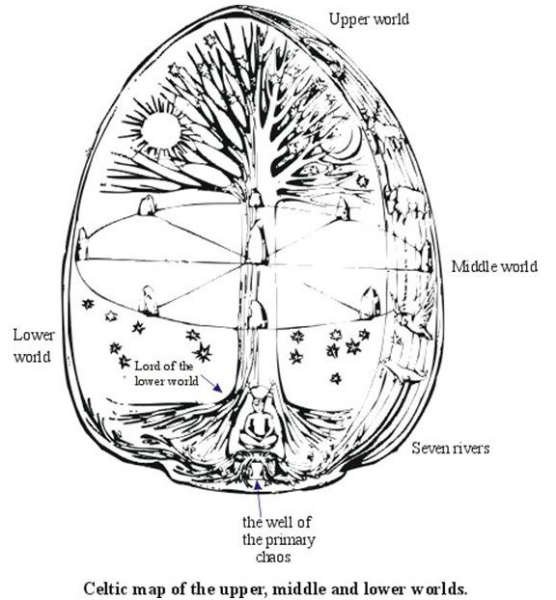 The lower world was treated as a source of useful information about the animal kingdom and autonomic systems.  It is shown symbolically as the roots of the tree being guarded by a horned god, who is shown sitting by a well. He rules the seven rivers of life having their source in the well. "The worlds situated inside the shell are endless and at the same time from the outside this universe looks smaller than a mustard seed"

Spirits of nature and other beings of shamanic tradition can be found in the lower world. According to ancient Celts new knowledge of crafts and practical skills come from the lower world.

The Lower world in Celtic [and other] traditions is simply a lower world, it takes on none of the later religion imposed connotations of evil.  But, since this is where the spirits of virus, bacteria, parasites and fungi are to be found, there is an element of danger in visiting this area  "when they get out of control they have the potential to destroy the whole of life on this earth". Neverthless Celtic tradition recognised that the spirit entities of both upper and lower worlds were two equally necessary components of the world creation.

The middle world that is situated between these two worlds is the universe as we see it with our 5 senses.

The trunk of the tree is the 'centre', the celestial pole 'which at the same time goes through its every point - one of the paradoxes of multi-dimensional reality'. It is the main way shamans were able to both travel and navigate 'enabling penetration of certain plans of reality using the eight cardinal directions, for example: East is for moving up the river — the upper world; West is for going down the river — the lower world'.

The next example is a map, it was drawn by one of the few remaining Siberian shamans to show the journey he undertook in the three worlds over a period of nine days. 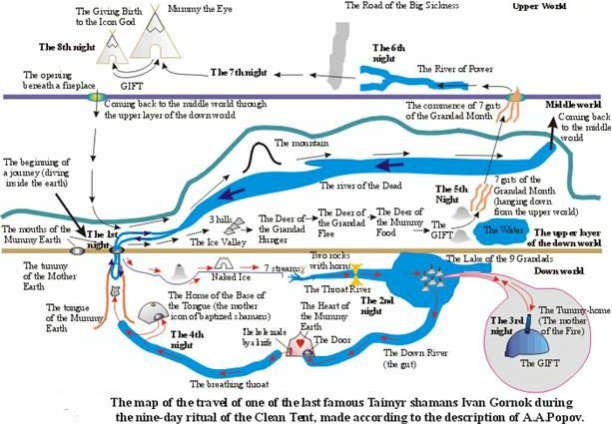 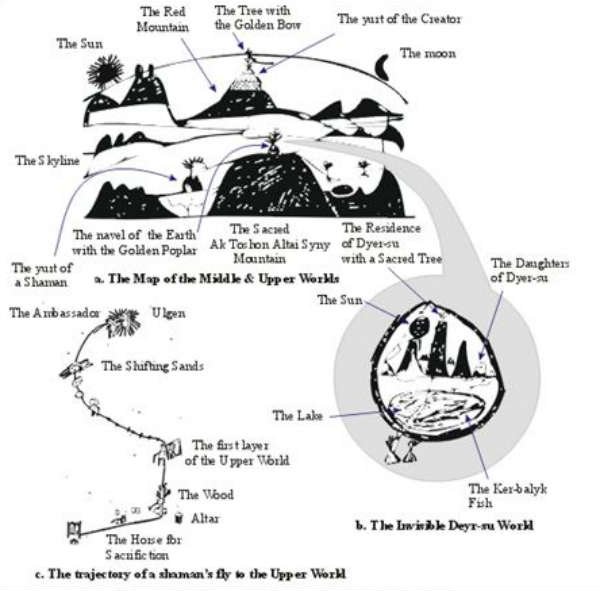 The final example is far more difficult to understand but is still representing the Three Worlds and it comes from Tantra.  This map is organised to look like the chalice, but the levels and layers are reversed, thus making it far more difficult to see what is going on [this may be a function of the person who drew the map - a researcher trying to capture word of mouth descriptions - rather than a cosmological feature].  Fire and Air appear to have been reversed adding to the confusion - again I think this may be the map maker.

The top triangle is the Upper Realm, the bottom triangle shows the Middle and Lower realms, but also shows the levels and layers of Earth, Water etc.  Within the Earth level we see the Lower realm shown as two tiny layers - a reflection of the emphasis of the system  of which this map is a part rather than the reality. 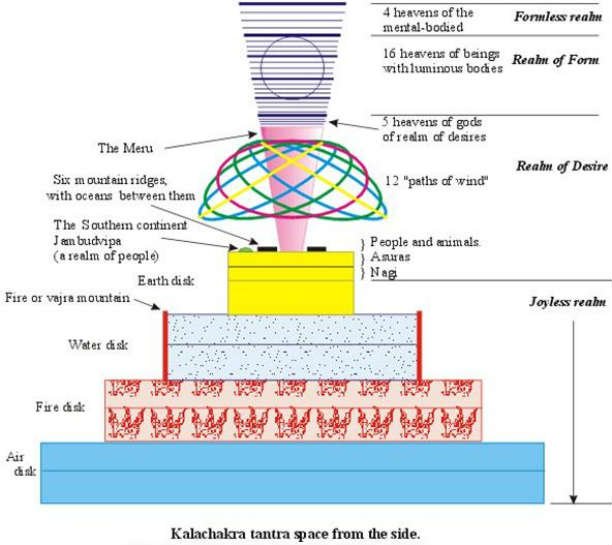