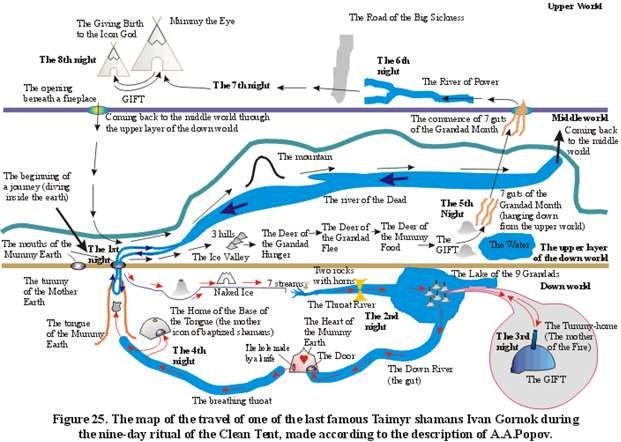 The map was derived from the experiences of Nganasan shamans during the Clear ‘tent ritual’.  The Nganasans are one of the indigenous peoples of Siberia. They are the northernmost of the Samoyed peoples, living on the Taymyr Peninsula by the Arctic Ocean. The holiday of the Clear tent takes place during the first days of February when the polar night is over. Then shamans ask gods and spirits for “well-being, good luck and happiness in the following year”. This ritual is conducted only by a ‘great’ or ‘middle’ shaman.  It lasts from three to nine days (the number of days must be uneven). During the holiday the shaman ………

Mystic Cosmos  - Evgueny  Faydysh
wanders in the lower, middle and upper worlds. The god/goddess Hore is his guide and patron in these wanderings that is the lord (mother) of trees. This god as many other spirits of shamanic pantheon is androgenous, i. e. has male and female characteristics ….

The ritual from which the map was derived was enacted by one of the only two ‘great’ remaining shamans of Taymyr Nganasans - Ivan Gornok -  in 1936, when the ritual was recorded by A.A.Popov over 9 days.