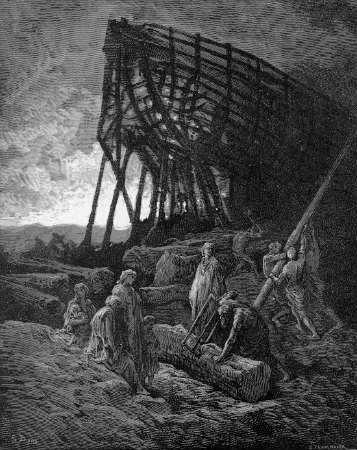 1 When men began to increase in number on the earth and daughters were born to them,

2  the sons of God saw that the daughters of men were beautiful, and they married any of them they chose.

3 Then the LORD said, "My Spirit will not contend with man forever, for he is mortal ; his days will be a hundred and twenty years."

4 The Nephilim were on the earth in those days—and also afterward—when the sons of God went to the daughters of men and had children by them. They were the heroes of old, men of renown.

5 The LORD saw how great man's wickedness on the earth had become, and that every inclination of the thoughts of his heart was only evil all the time.

6 The LORD was grieved that he had made man on the earth, and his heart was filled with pain.

7 So the LORD said, "I will wipe mankind, whom I have created, from the face of the earth—men and animals, and creatures that move along the ground, and birds of the air—for I am grieved that I have made them."

8 But Noah found favour in the eyes of the LORD.

9 This is the account of Noah. Noah was a righteous man, blameless among the people of his time, and he walked with God.

11 Now the earth was corrupt in God's sight and was full of violence.

12 God saw how corrupt the earth had become, for all the people on earth had corrupted their ways.

13 So God said to Noah, "I am going to put an end to all people, for the earth is filled with violence because of them. I am surely going to destroy both them and the earth.

14 So make yourself an ark of cypress  wood; make rooms in it and coat it with pitch inside and out.

16 Make a roof for it and finish the ark to within 18 inches  of the top. Put a door in the side of the ark and make lower, middle and upper decks.

17 I am going to bring floodwaters on the earth to destroy all life under the heavens, every creature that has the breath of life in it. Everything on earth will perish.

18 But I will establish my covenant with you, and you will enter the ark—you and your sons and your wife and your sons' wives with you.

19 You are to bring into the ark two of all living creatures, male and female, to keep them alive with you.

21 You are to take every kind of food that is to be eaten and store it away as food for you and for them."

22 Noah did everything just as God commanded him

5 And Noah did all that the LORD commanded him.