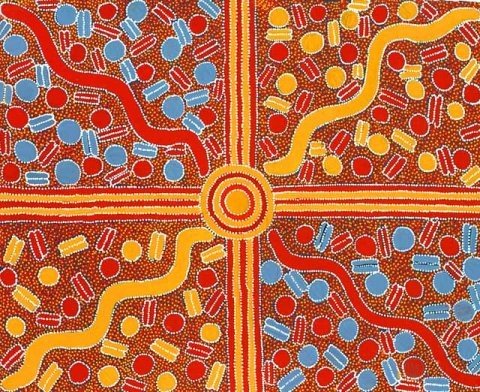 After their symbolic descent to the underworld the master prepares to lead him to the camp of Baiame, the Supreme Being.  To reach it, they climb a cord until they meet Wombu, Baiame’s bird.  ‘We went through the clouds’ and apprentice related ‘and on the other side was the sky.  We went through the place where the Doctors go through and it kept opening and shutting very quickly.  Anyone whom the doors touched lost his magical power and was certain to die as soon as he returned to earth.

Here we have an almost complete schema of initiation; descent to the lower regions followed by ascent to the sky, where the Supreme being grants shamanic power.  Access to the upper regions is difficult and dangerous; it is necessary to enter in a twinkling, before the gates shut.

In another account recorded by Howitt there is a cord by which the blindfolded candidate is conveyed onto a rock, where he finds the same magical door that opens and shuts with great rapidity.  The candidate and his initiatory masters enter the rock, and there the blindfold is taken from his eyes.  He finds himself in a place of light with rock crystals glittering from the walls.  He is given several of these crystals and told how to use them.  Then, still hanging from the rope he is carried back to camp through the air and deposited in the top of a tree.

These initiatory rites and myths form part of a more general belief regarding the medicine man’s ability to reach the sky by means of a rope, a scarf or simply by flying or climbing a spiral stairway.  Several myths mention that the first men mounted to the sky by climbing a tree; thus the ancestors of the Mara were accustomed to climb a certain tree up to the sky and come down again.  Among the Wiradjuri the first man, created by Baiame, the Supreme Being, could reach the sky by a path on a mountain and then by climbing a stairway to Baiame, just as the medicine men still do down to our day among the Wurundjeri and the Wotjobaluk.  The Yuin medicine men go up to the dwelling of Daramulun, the Supreme God, who gives them remedies