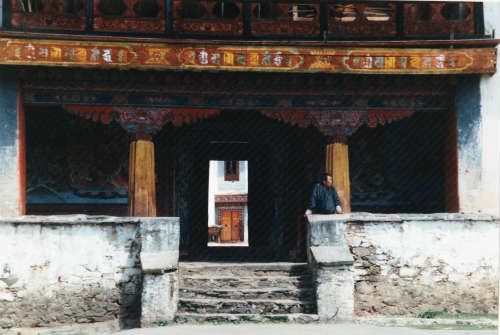 The word ‘Portal’ is a general term describing an opening in the boundaries found at each level or alternatively around the boundaries of a cell in the Matrix.

Portals are a security device, similar in operation to a firewall or locking device.  In visions and hallucinations or dreams, the person will come across an impenetrable boundary which can only be passed using the portal provided.  But these portals may be closed or have guardians or simply appear to be impasssable.  One example I came across was of a portal which looked like an eye – except the pupil of the eye – through which access had to be made – opened and closed.

There are two major types of portal, portals up and down between levels and layers and horizontal portals which operate at a level.

Up and down portals

In the spiritual world, portals up and down between levels and layers are used to control entry to or exit from those levels.  Control can be between major levels such as the earth, water, air fire and  aether levels or between sub-levels which include the  planets.

The vortex, funnel, tunnel, well, mine, chimney and ladder as well as spiral are frequently recurring themes.  There  are tunnels spiralling round,  whirlpools, whirlwinds, spirals of clouds, spirals of light, whorl patterns like those on a finger, and vortices of indeterminate character.

Generally speaking, the vortices either take you ‘up’ or take you ‘down’.  Whirlpools, funnels and tunnels had a tendency to take you ‘down’ levels and whirlwinds, spirals of cloud, spirals of light, ladders and similar more gentle visionary images took you ‘up’.  Having gone ‘up’ vibrational levels, however, the same portal could be used to get ‘down’ again so the rule only applies for exploratory travel, not return travel.

Portals between levels, can take you several levels at a time.  You may be in the earth level and be whisked almost without feeling it to the air level.  Alternatively the portal may be extremely subtle, taking you only small ‘distances’.  It is possible to discover completely new levels using portals, as the levels are so poorly mapped and poorly visited – you may find the old configurations of earth in the making [water level] or even the new configurations of earth in the making [water level].  You almost certainly will find far more systems than anyone has discovered so far.

Portals at a level 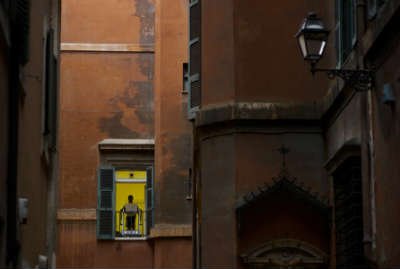 Where you are travelling at only one vibrational level, portals may still block your access from cell to cell.  These types of portal can be doors, discs, gates, windows, simple holes plus many other sorts of opening.  Whatever our physical landscape tends to produce gets copied in the spiritual world. 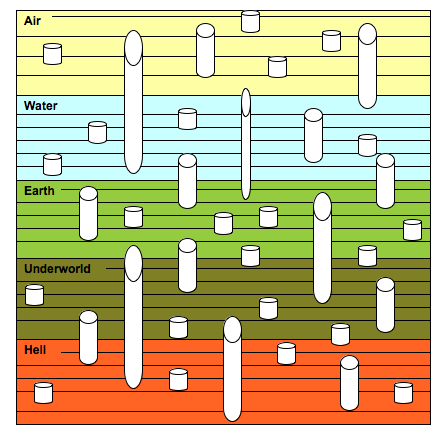 Access when a person travels horizontally at a level, is often controlled by the use of Guardians and also by the use of things like passwords.  Alternatively, a person may be asked to perform some sort of challenge or task or be given a Key.  Access between levels may be  similarly controlled, the difference being that access often becomes much ‘harder’ and more challenging the higher you go. If you go down, access to certain areas may be restricted, but general restrictions at a level do not apply.  In effect, there may well be restrictions that apply to a cell, but not to the level as a whole.

The temporary nature of some portals

In the diagram, I have shown the portals as though they were fairly ‘solid’ stable and permanent affairs, but it appears that they can be of two types.

Some indeed are permanent and stable and are often the larger longer tunnels.  But some are very impermanent and are constructed only for the purposes of a temporary need for access.  These types of portal are often ‘seen’ as whirlwinds, or whirlpools or similarly ephemeral types of effect, in other words their nature shows their type. The more permanent portals look permanent they are seen as ladders and columns and mines and so on.

The realism with which visions were often experienced often meant that those who did not experience the visions started to believe that the physical phenomena which were used as symbols in dreams visions and so on were the real means by which spirits travelled. The Arabs, for example, used to believe that the Zoba'ah, a whirlwind that raises the sand in the form of a pillar of tremendous height,  to be literally an entry to the spirit world. Their spirits (jinns) are believed to ascend and descend via the whirlwind.  A water spout is also regarded symbolically in the same way.

In much the same way, the myth of the ‘secret underground tunnel’ leading to hidden treasure is derived from shamanic flight down spiritually perceived tunnels.