Both the egg and the 5 levels are usually shown on the shaman’s drum, whose surface acts as a map to the spirit world.

On the outer side of the drum of the Chern Tartars, pictures of animals and plants are found. On the upper and larger part an arch is drawn, with indications of sky, inside of which are two trees with a bird on each. To the left of the tree are two circles-the sun and the moon-light and darkness. Below the horizontal line are pictures of frogs, lizards, and snakes. These drawings have a particular importance, since the symbols described show more than any others the shamanistic view of the natural and the supernatural.

On the whole, it is safe to say that the drums of the natives of north-west Asia, especially in the southern parts, are adorned with representations of the upper and lower worlds divided by a horizontal line……….

Many other authors also comment on this method of dividing the pictures on the Neo-Siberian drum. Wierbicki, describing the tüngür of the natives of Altai, says: 'On the outer side the hide is painted with red ochre; on the upper part are represented the sky, a rainbow, sun, moon, stars, horses, geese, the kam on a horse, and, on the lower part, the earth 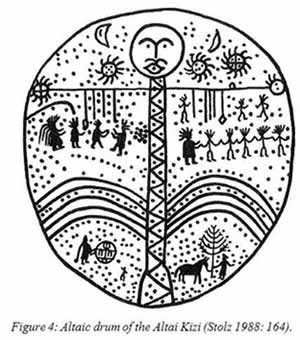 Practically all the drums of the Siberian shamans are oval and not round.  Yadrintzeff, for example, says that the Tartars of Chern have oval drums resembling the egg-shaped drum of the east Siberians.   The southern drum is large and somewhat oval in shape, and is held by four loose bands, which are fastened to the hoop of the drum on the inner side. The other ends of these bands meet in the middle, where they are tied to a small wheel or a cross, which is without any other support. When these are grasped by the hand the drum hangs loosely, and may be shaken and its position changed at will. The drum-stick is made of wood and covered with skin or with cured leather.

As we can see, the map includes the Trinity [sun, moon, implemented], the central tunnel from the creator/created section to the implemented section, the levels and layers shown symbolically and a very crude representation of the systems to be found in each matrix segment.