A symbolic  bridge is a means of travelling from island to island -  cone to cone.  But the very first bridge one must cross  to be able to do this is the one that gets you to your own composer.  Beyond that there may be numerous other bridges – some narrow some not  - that take you to other cones – other things.

This first symbolic bridge is actually a passage or it can be seen as a tunnel or a bridge or some portal that takes you to the Higher spirit.  It is often symbolically guarded.  There are often two guardians [like Kerberos].

The ‘narrow passage’ or ‘dangerous passage’ is a common motif in both funerary and initiatory mythologies – we have seen how closely they may be connected, sometimes to the point of coalescence.

‘Lightness’ or ‘swiftness’ – as in the myths of passing very quickly through the jaws of a monster – is always a symbolic formula for ‘intelligence’, ‘wisdom’, ‘transcendence’ and in the last analysis for initiation.

Bridges can be seen as swords, planks, knives, ordinary bridges, walkways, and be wobbly, narrow, with no sides like an isthmus with parapets and so on – all these things have  a symbolic meaning and describe the firmness and security or effectiveness of the bridge you have formed.  Between each cone symbolically is the Abyss.  There may also be guardians at the end of each bridge, for obvious reasons.

A sharpened edge of a razor, hard to traverse
A difficult path is this – poets declare

Just like all portals, unless the person is accompanied by his spirit helpers or has his spiritual key [the ankh, the key, the mace etc], the person may need to provide a password, perform some sort of challenge or task or be given a key.  I am not describing a game here – this is exactly what happens in many visions and dreams.  The spiritual world appears to protect the cones in the egg and set quite stringent security blocks in place.

As all Intelligences also have composers, it is possible to go from your hill to their mountain, but this is indeed a perilous path where you are likely to meet guardians of a most ferocious kind – unless of course you are meant to be there or are accompanied.  As can be seen from my diagram the bridge can appear to be a ladder or a set of stairs.

By crossing, in ecstasy, the ‘dangerous bridge’ that connects the two worlds and that only the dead can attempt, the shaman proves that he is spirit, is no longer a human being, and at the same time attempts to restore communicability that existed in illo tempore between the world and heaven.  For what the shaman can do today in ecstasy could, at the dawn of time, be done by all human beings in concreto; they went up to heaven and came down again without recourse to trance.  Temporarily and for a limited number of persons – the shamans – ecstasy re-establishes the primordial condition of all mankind.

The following is also very helpful:

In cosmological myth, bridges sometimes lead from the realm of mortals to the land of the dead, or to the abode of the gods. Zoroastrian myth tells of the Cinvat (‘separation’) bridge, ‘the holy bridge made by Mazda’ that stretches over hell to paradise, ‘which is the route of every one, righteous or wicked; the width across the route of the righteous is a breadth of nine spears, each one the length of three reeds, but the route for the wicked becomes like the edge of a razor’ . The bridge is suspended between two mountains, one in the centre of the world, one at the rim. This serves to reinforce the liminal bridge’s status, by linking the range of mountains believed to encircle the earth, that which separates the outside from the inside, with that of the axis mundi, which keeps earth and sky apart. Similar bridges occur in the traditions of the Ossetes, Armenians, and Georgians; and the bridge al-Sirat (‘the path’) of Islamic tradition is almost certainly derived from Zoroastrian cosmology.

The Cinvat bridge is analogous to that crossed by the Altaic shaman in the spirit-journey to the underworld realm of Erlik Khan. This bridge is as wide as a hair, and the sea below it is strewn with the bones of shamans who have failed the crossing - like the Cinvat, this bridge will not tolerate a sinner . A variation on this motif occurs in North American native myth: the Telumni Yokuts believe that the land of the dead is reached by crossing a stream by way of a shaking bridge that the living cannot use. In the same vein are the sword-bridge that features in a number of Arthurian romances, and the pont où nul ne passe described in a continuation of Chrétien de Troyes’ Perceval. The last is only half a bridge, but when the hero reaches the middle it swings about so that the end that formerly rested on one side now leads to the other.

The road to the land of the dead is said to lead across a bridge in many other traditions. The Semang of Malaysia have a bridge called Balan Bacham that reaches across the sea to the magical island of Belet; also in Malaysia, the Sakai tell of a bridge named Menteg that spans a cauldron of boiling water, into which the wicked fall . For the Moso of southwest China, the otherworld is reached by a bridge blockaded by ‘demons’ [guardians] .

The Norse myth of Baldr’s death tells of Hermóðr’s ride to the land of Hel on Odin’s steed Sleipnir; on the way he crosses the Gjallar brú, the gold-roofed ‘echoing bridge’ over the river Gjoll. Saxo Grammaticus gives the story of Hadingus, who is taken on a journey to the underworld by a mysterious woman; on the road they cross a bridge over a river strewn with weapons . Saxo also tells of a river that separates the world of men from a supernatural realm inhabited by monsters, spanned by a golden bridge forbidden to travellers; and the paradisal land Odainsakr of Eiríks Saga Viðforla is reached via a stone bridge. The most famous bridge in Norse myth is Bifrost, the ‘trembling way’ that is popularly identified with the rainbow. Bifrost stretches from Miðgarðr to Asgarðr, terminating at Himinbjorg, the home of its watchman Heimdallr .

Bridges, like all crossing places, are dangerous. As routes across the body of water that separates the living from the dead, or across the infernal abyss, these mythical bridges are especially dangerous: the soul of the sinner cannot cross, and the bridge distinguishes between the righteous and the damned. Earthly bridges are fixed structures, but these are narrow or broad, as occasion demands, or are endowed with an apparent structural unsoundness that allows only the morally resolute to make the crossing in safety. Sometimes, the danger is there for all, and for the righteous the bridge is a final test. Invariably, the bridge leads to a kind of paradise or to an underworld that will not tolerate the presence of the bad, who fall from it into a place of dissolution or punishment. 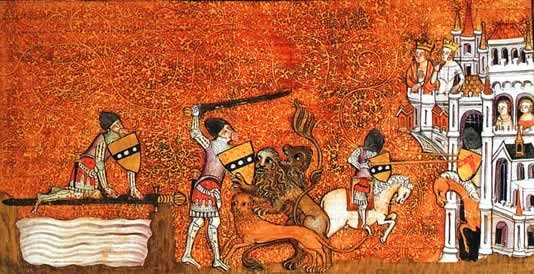