I first became aware of the significance of the shaman's need for exquisite balance in my contact with the Huichol Indians of North Central Mexico several years ago. For some time I had been working with a Huichol mara'akame, or shaman priest, named Ramon Medina Silva.

One afternoon, without explanation, he interrupted our sessions of taping mythology to take a party of Huichol friends and myself, to an area outside his home. It was a region of steep barrancas cut by a rapid waterfall cascading perhaps a thousand feet over jagged, slippery rocks.

At the edge of the fall, Ramon removed his sandals and announced that this was a special place for shamans.

He proceeded to leap across the waterfall, from rock to rock, frequently pausing, his body bent forward, his arms outspread, head thrown back, entirely bird-like poised motionlessly on one foot. He disappeared, re-emerged, leaped about, and finally achieved the other side.

I was frightened and puzzled by the performance, but none of the Huichols there seemed at all worried. The wife of one of the older Huichol men told me that her husband had started to become a mara'akame but had failed because he lacked balance. I assumed that she referred to his social and personal unsteadiness, for he was an alcoholic and something of a deviant.

I knew I had witnessed a virtuoso display of balance, but it was not until the next day when discussing this event with Ramon that I began to understand more clearly what had occurred.

“The mara'akame, must have superb equilibrium” he said and demonstrated the point by using his fingers to march up his violin bow. "Otherwise he will not reach his destination and will fall this way or that'" And his fingers plunged into an imaginary abyss.

"One crosses over; it is very narrow and without balance, one is eaten by those animals waiting below”. 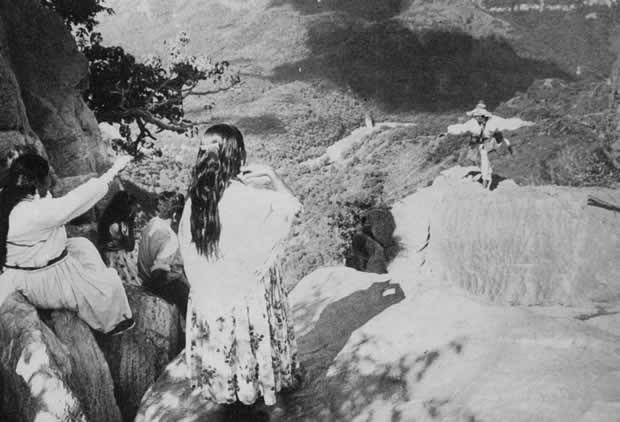