The commonly touted explanation for all this inter communication amongst the science community is that there must be some chemical they send out.  But this is a very weak explanation and is entirely unproven, whereas the sophistication of the communication that does take place is well studied.

The key sentence here is " It is certain that Atta have a telecommunication system, and it seems to be independent of known chemical and mechanical senses'"

The key thing from what I can see of the observation and other observations is that they have become an aggregate, with the added possibility of a bridge to forge that aggregate status. 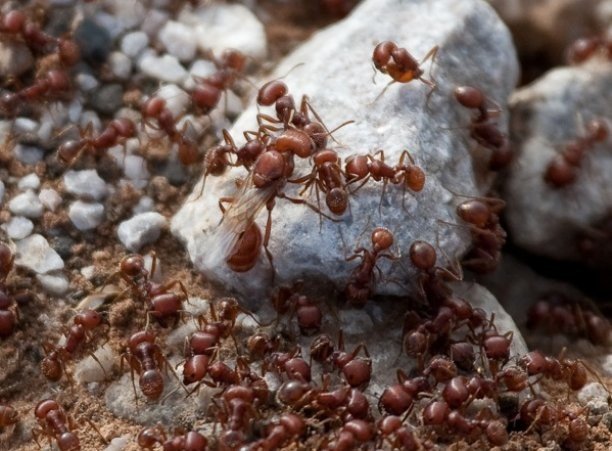 Ivan Sanderson has studied harvester ants of the genus Atta in tropical America and reports remarkable communal activity.  These ants build a network of complex, well cleared roads radiating out from their underground city for as much as half a mile to all the useful food sites in the vicinity.

If one of these roads becomes blocked by a fallen branch or other obstacle, traffic is disrupted until the special police ants arrive to direct the construction of a detour.  Sanderson was impressed by the speed with which reinforcements arrived at a site and arranged a number of roadblocks of his own where he and his associates were installed along the road at intervals with stop watches.  They found that 'a great phalanx of police ants came charging up the road from the nest, shoulder to shoulder, about 50 ants wide and rank after rank almost instantaneously.  There was not nearly enough time for word of the disaster to be carried antenna to antenna touch all the way back, the wind was blowing away from the nest and would soon have dispersed any alarm scents, it was dark, and no sound seemed to be involved.  It is certain that Atta have a telecommunication system, and it seems to be independent of known chemical and mechanical senses'.

A colony of insects is, in a very real sense, a single organism.  The queen is the sex organ and master endocrine gland; the workers are reproductive tract, digestive tract and regenerative organs; the police are regulatory activities and the soldiers are the organs of defence.  All are united by a set of instincts into a single self supporting structure in which the interests of the parts are subordinate to the interests of the whole