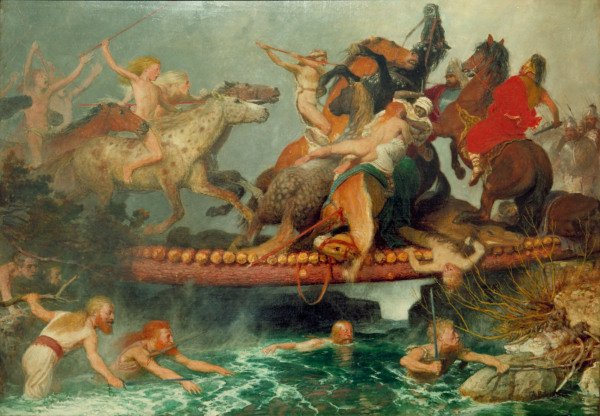 Böcklin’s Der Kampf auf der Brϋcke, 1892 , [Private Collection] or the Battle of the Bridge was said to have been inspired by Rubens' Battle of the Amazons (Alte Pinakothek, Munich). Böcklin depicts the crescendo of a battle between a “fair-skinned (Germanic) tribe” and an army most critics have assumed is and I quote “a civilised and organised (Roman) army”.

Nothing could have been farther from Böcklin’s mind.

The bridge is symbolically the entrance to the spirit realm, for example:

THE BOOK OF ARDA VIRAF   - Translated by Prof. Martin Haug, of the University of Munich, revised from the MS. of a Parsi priest Hoshangji. From The Sacred Books and Early Literature of the East, Volume VII: Ancient Persia, ed. Charles F. Horne, Ph.D., copyright 1917.

Chapter 5.1. Afterward, the width of that Chinwad bridge became again nine javelin-lengths.
(2) With the assistance of Srosh the pious, and Adar the angel, I passed over easily, happily, courageously, and triumphantly, on the Chinwad bridge.
(3) I had much protection from Mihr the angel, and Rashn the just, and Vai the good, and the angel Warharan the powerful, and the angel Ashtad the world-increasing, and the glory of the good religion of the Mazdayasnians;
(4) and the guardian angels (fravashis) of the pious, and the remaining spirits first bowed to me, Arda Viraf.
(5) I also saw, I Arda Viraf, Rashn the just, who held in his hand the yellow golden balance, and weighed the pious and the wicked.

In other words, the forces of Light are repelling the forces of Darkness from entry to the spiritual realm. The forces of materialism, atheism, science as religion – the Dark forces – are being denied any form of spiritual experience, which means they will also be denied inspiration and wisdom, bliss and peace, healing, and divine love.

There is of course also the additional message implied in this, to spur on the troups of Light – don’t defend, attack, fight back against this Dark threat to civilisation.

This is one of three closely related paintings of the subject Böcklin completed between 1889 and 1892. The final version (Andree no. 418) was in fact the one he started first – this one.

Böcklin's choice of subject may also – but not exclusively have been influenced by  Nietzsche's Zur Genealogie der Moral (On the Genealogy of Morals), published in 1887. In this work, Nietzsche suggests that in all civilisations, pent up resentment (alienation and oppression) can become a creative force.