The illustration by Rossetti is entitled "Sancta lilias 1874"

From the Tate description

Rossetti may have been influenced in his choice of subject by the thoughts and writings of the Swedish theologian Emmanuel Swedenborg (1688-1772). In Conjugial Love (1768) Swedenburg wrote that each man or woman has an ideal partner - a 'conjugial' partner - and that their union constitutes an eternal, sanctified love......In the picture  Rossetti....... uses the model Alexa Wilding. Even more significant, the women in the background of The Blessed Damozel were modelled on Jane Morris, perhaps denoting a dilemma in Rossetti's mind as to who his 'ideal partner' might be.

In Rossetti's poem, the Damozel has seven stars in her hair. This is an oblique reference to the seven daughters of Atlas and Pleione, who were transformed into the seven stars of the Pleiades. In the picture Rossetti has included only six stars, since one of the stars, Merope, ashamed of her love for Sisyphus, a mere mortal, shined invisibly. ...... Sisyphus, who was forced to roll a giant boulder eternally uphill.

In the poem and the finished picture the Damozel holds three lilies.  In Sancta Lilias (Sacred Lily) Rossetti has substituted yellow irises..... In Classical myth Iris was the goddess of the rainbow, the bridge between heaven and earth. In the context of the picture, therefore, it may be intended to represent the link between ..... the earthly and the spiritual.

The Tate descriptions often add Christian interpretations to paintings which were not Christian, so I have excluded their somewhat biased additions from the description above  and stuck to the pure spiritual symbolism used by all the pre-Raphaelites.  Rossetti probably saw himself as Sisyphus, painting pictures that no one would understand because they couldn't be bothered to learn the symbolism.  He believed in reincarnation and clearly thought he had done this a number of times.

He used Alexa Wilding because he was aiming for the Mystic marriage, you will have to look this up in the symbol section yourself!

Her robe, ungirt from clasp to hem
No wrought flowers did adorn
But a white rose of Mary's gift
For service meetly worn
Her hair that lay along her back,
Was yellow like ripe corn

It was the rampart of God's house
That she was standing on
By God built over the sheer depth
The which is Space begun
So high, that looking downward thence
She scarce could see the sun

It lies in Heaven, across the flood
Of ether as a bridge
Beneath the tides of day and night
With flame and darkness ridge
The void, as low as where this earth
Spins like a fretful midge

Heard hardly, some of her new friends
Amid their loving games,
Spake evermore among themselves
Their virginal chaste names
And the souls mounting up to God
Went by her like thin flames 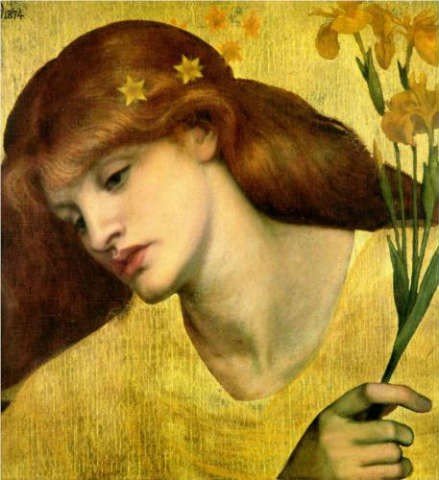