Energy is recycled – see Masculine and feminine, and yin and yang.  Thus there is a continuous ‘movement’ of programmed energy – spirit.  A cyclical up and down flow towards the centre of the Egg and away from it.

And where does all this energy go to and come from? The abyss.  The energy within the Egg cycles round and round in a loop – see levels and layers and is destroyed or created within the abyss. 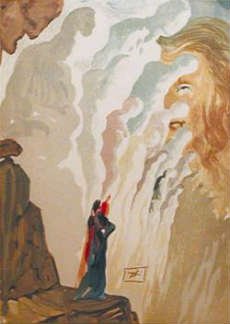 Tehom in the Bible refers to the ‘great deep’ [the abyss] of the primordial waters of creation. It is first mentioned in Genesis 1:2: "veharetz hayta tohu vavohu vekhoshekh al-pnei tehom veruach elohim merakhefet al-pnei hamayyim". "And the earth was without form, and void; and darkness was upon the face of the deep. And the Spirit of God moved upon the face of the waters.". (King James version).  It was from this place that the waters of Noah's flood had their origin (Gen. 7:11).

There are at least two abysses one close to the centre and another at the extremities of the Egg.

It is an area of chaos, and area in which energy is no longer ordered, but where input is being dissolved ready to be recycled as new energy.  See a Map of the Universe.

According to John Pordage , there is  a small band of unprogrammed energy between the ‘eye of God’ and the rest of the ‘Egg’ that is used like a sort of pool from which to draw energy and into which no longer needed energy can be placed.  A similar band exists at the lowest levels.  Pordage described this layer as a permanent feature generating a ‘flow’ of energy which is felt as a sort of wind. 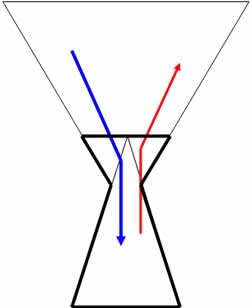 There is clearly an area of unprogrammed energy outside the Egg into which the energy generated by destroying ‘viruses – demons – can be placed.  But the next question then arises, where is the second abyss?

From all accounts it exists between the top of our soul cones and the aether level.

It appears to exist beyond the fire layer and level.  Thus symbolically speaking one has to go through the fire level before one reaches the abyss and the abyss separates the aether and fire levels.

Again symbolically there are portals  - bridges and tunnels , or whirlpools and whirlwinds that take you through this area without you ever seeing it [although some have when they have used the bridge and some see it during rebirth experiences .] Sheer cliffs are seen on either side.

To provide just one example, that helps to cement this belief.  The ancient Norsemen and in Teutonic mythology called the abyss  ‘Ginnungagap’ the place where chaos was to be found.  It was bounded upon the north side by the cold and foggy ‘Niflheim’ – the land of mist and fog – and upon the south side by the fire ‘Muspelheim’.  When heat and cold entered into Ginnungagap, they caused the crystallisation of the visible universe – and vice versa.

Literally Ginnungagap means"yawning abyss"  and corresponded (both in etymology and in meaning) to the Greek notion of Chaos.  An alternative etymology, linking the ginn- prefix in Ginnungagap with that found in terms with a sacral meaning, such as ginn-heilagr, ginn-regin (both referring to the gods) and ginn-runa (referring to the runes), interprets Ginnungagap as signifying a "magical (and creative) power-filled space".

Niflheim (or Niflheimr) ("Mist Home", the "Abode of Mist" or "Mist World") is one of the Nine Worlds and is a location in Norse mythology which overlaps with the notions of Niflhel and Hel. The name Niflheimr only appears in two extant sources, Gylfaginning and the much debated Hrafnagaldr Óðins.

According to the Ragnarök prophecies in Snorri Sturluson's Gylfaginning, the first part of his Prose Edda, the sons of Muspel will break the Bifröst bridge, signaling the end of time. 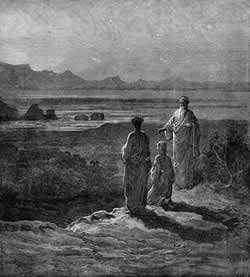 For example, the Celts placed the abyss at the top of hills or mountains, which if you think about , symbolically it is being at the end of the soul cone; in Ireland, Japan and the South Sea islands, it was at the bottom of seas and lakes, so they used the water symbolism; among Mediterranean peoples it was just ‘beyond the horizon’.

The Australian aborigine used the actual Milky Way as the symbolic reminder of the existence of the abyss.