Blithe spirit - Candle in the wind

This was achieved using the Monroe system and hemi-sync technology.

As it turned out I was indeed close to death at this point, the arteries to my heart were well blocked, though this is not a near death experience. 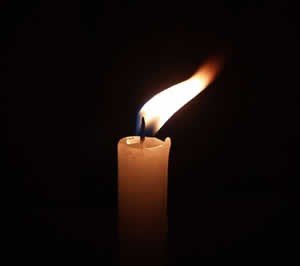 I appeared to be in a dark place with a wind of great ferocity blowing and blowing and blowing.  I was all alone, holding a solitary candle.  The flame was flickering very badly and I was sure the wind would extinguish it.  It felt somehow very dangerous, as though I would go out with the candle.  Then great numbers of ghostly forms came towards me, faceless, one by one more and more forward then back, towards me then away.  White wraiths.  After a long time, two wraiths took me up in the blackness holding the candle and I saw a vast figure, white mist,  elongated, powerful, face indistinguishable, but with an aura of huge gentleness and kindness.  It reached down its hands and touched my face, one ‘hand’ either side and seemed to simply bless me, although nothing was said.  Somehow the wind started to die down and it didn’t seem as dark.  The flame seemed to have steadied too, it seemed a little brighter and wasn’t flickering as much.  I was supposed to be asking for a message for my fellow quester [we were doing the exercise together], so I asked my question and the figure gave a reply for her.  Then the two wraiths led me back and the exercise ended with the beacon sound.