Blake, William - By degrees we beheld the infinite Abyss

The actual imagery used in visions is dependent on the symbols and imagery available to our composers. The databank of images from which hellish images can be drawn, for example, is unfortunately enormous and still growing at a vast rate. Every torture, every fearful event, every rape, act of cruelty, every image of terror, simply adds to the core of what can be used in the vision.

William Blake provided the following wonderful description, shown to him by ‘an Angel’, but the last paragraph is key to the understanding of this text. Blake explains that the only reason he saw all this was because of the ‘Angel’s’ metaphysics.

In effect, it was the Angels’ symbolism which was used not Blake’s.

Blake then gets his own back by showing the Angel his fate – he actually imagines and invents a rather unpleasant end and environment for the Angel. The Angel is none too pleased and complains that ‘thy phantasy has imposed upon me and thou oughtest to be ashamed’, to which Blake replies ‘we impose on one another, and it is but lost time to converse with you whose works are only Analytics’

Blake's "The Red Dragon and the Woman Clothed with the Sun"... 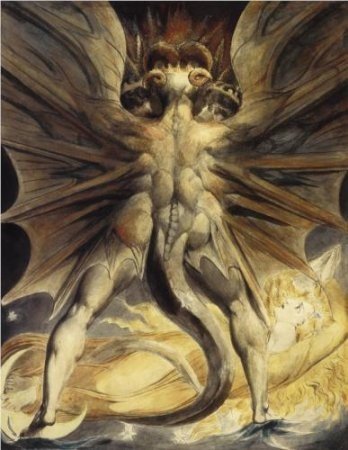 By degrees we beheld the infinite Abyss, fiery as the smoke of a burning city; beneath us at an immense distance was the sun, black, but shining; round it were fiery tracks on which revolved vast spiders, crawling after their prey; which flew or rather swum in the infinite deep, in the most terrific shapes of animals sprung from corruption and the air was full of them and seemed composed of them; these are Devils and are called Powers of the air.

But now from between the black and white spiders a cloud burst and rolled through the deep, blackening all beneath, so that the nether deep grew black as a sea and rolled with a terrible noise; beneath us was nothing now to be seen but a black tempest, till looking east between the clouds and the waves, we saw a cataract of blood mixed with fire and not many stones throw from us appeared and sunk again the scaly fold of a monstrous serpent.

At last to the east, distant about three degrees appeared a fiery crest above the waves slowly it reared like a ridge of golden rocks till we discovered two globes of crimson fire, from which the sea fled away in clouds of smoke and now we saw the head of a Leviathan his forehead was divided into streaks of green and purple like those on a tiger's forehead; soon we saw his mouth and red gills hang just above the raging foam, tinging the black deep with beams of blood, advancing towards us with all the fury of a spiritual existence.

…….All that we saw was owing to your metaphysics; for when you ran away, I found myself on a bank by moonlight hearing a harper