Blake, William - He sunk down into the sea a pale white corse 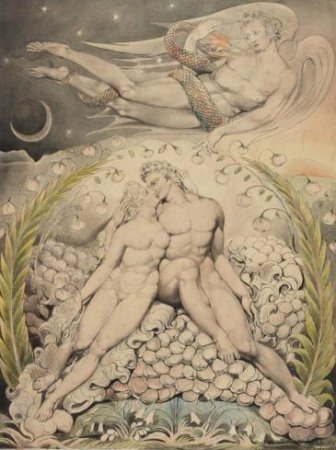 He sunk down into the sea a pale white corse
In torment he sunk down and flowed among her filmy Woof
His spectre issuing from his feet in flames of fire
In dismal gnawing pain drawn out by her loved fingers every nerve
She counted every vein and lacteal threading them among
Her woof of terror.  Terrified and drinking tears of woe
Shuddering she wove – nine days and night sleepless her food was tears
Wondering she saw her woof begin to animate and not
As garments woven subservient to her hands but having a will
Of its own, perverse and wayward

According as they weave the little embryon nerves and veins
The eye, the little nostril and the delicate tongue and ears
Of labyrinthine intricacy, so shall they fold the world
That whatever is seen upon the mundane shell, the same
Be seen upon the fluctuating earth woven by the sisters
And sometimes the earth shall roll in the abyss and sometimes
Stand in the centre and sometimes stretch flat in the expanse
According to the will of the lovely daughters of albion
Sometimes it shall assimilate with mighty Golgonooza
Touching its summits and sometimes divided roll apart.
As a beautiful veil so these females shall fold and unfold
According to their will the outside surface of the earth
An outside shadowy surface superadded to the real surface
Which is unchangeable for ever and ever

And in the North gate, in the West of the North, toward Beulah
Cathedrons Looms are builded ………
A wondrous golden building immense with ornaments sublime
Is bright cathedrons golden hall, its courts, towers and pinnacles

And one daughter of Los sat at the fiery reel and another
Sat at the shining Loom with her sisters attending round
Terrible their distress, and their sorrow cannot be uttered.
And another daughter of Los sat at the spinning wheel.
Endless their labour, with bitter food, void of sleep
Tho’ hungry they labour; they rouse themselves anxious
Hour after hour labouring at the whirling wheel
Many wheels and as many lovely daughters sit weeping

Yet the intoxicating delight that they take in their work
Obliterates every other evil; none pities their tears
Yet they regard not pity and they expect no one to pity
For they labour for life and love, regardless of any one
But the poor spectres that they work for

They labour; and when their wheels are broken by scorn and malice
They mend them sorrowing with many tears and afflictions
………………..

Men understand not the distress and the labour and sorrow
That in the interior worlds is carried on in fear and trembling
Weaving the shuddering fears and loves of albions families
Thunderous rage the spindles of iron and the iron distaff
Maddens in the fury of their hands, weaving in bitter tears
The veil of goats-hair and purple and scarlet and fine twined linen