Despite the regard in which he was held by the Venetians, Dürer returned to Nuremberg by mid-1507, remaining in Germany until 1520. Between 1507 and 1511 Dürer worked on some of his most celebrated paintings and woodcuts.  In 1513 and 1514, Dürer created his three most famous engravings: Knight, Death, and the Devil, St. Jerome in his Study, and Melencolia I (both 1514).

An armoured knight, accompanied by a faithful and loyal dog, rides through a narrow gorge [abyss] flanked by a psychopomp [with his twin horns] and a goat. The psychopomp holds an hourglass.

The knight’s armour, the horse, the oak leaves and the fortress/palace on the mountaintop are all symbolic.

There is an indication this may be symbolic of the rebirth experience as one does indeed go 'down' as it were, before one is able to then go 'up' the figurative mountain. 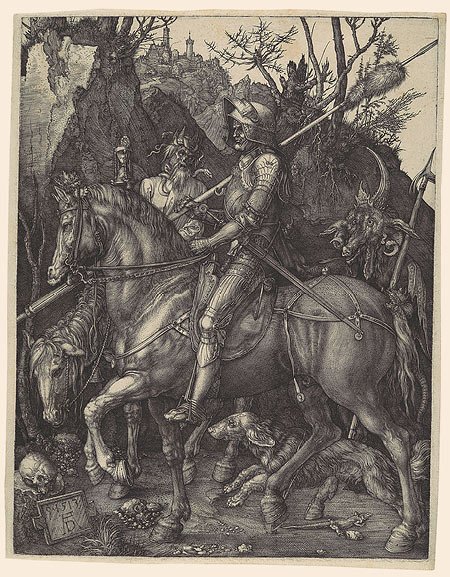