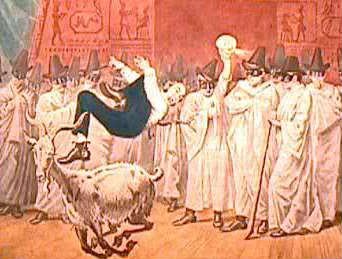 A goat first and foremost takes its symbolism from animals.  It is a means of transport.

The rest of the symbolism of the goat derives principally from the fact it is found on top of high mountains – thus linking it with the symbolic mountain - and its horns – twin horns which thus symbolically link it with both the Creator and Created – the symbolic Sun and Moon.  A goat is thus symbolically very high in the spiritual hierarchy of creatures, symbolically able to control life and death – a sort of immortal or god.

But, there is added symbolism in the fact that in actuality goats are agile, unafraid of heights, like their freedom and are clever and intelligent enough to gain and keep their  freedom.  Goats are also as animals curious, inquisitive, intelligent and adventurous.

This means that symbolically a goat might be the insignia of a magician or clever shaman or shamaness rather than a mystic.  Prometheus rather than Plato.

Goats and the ‘devil’

The cleverness of shamans and magicians and the fact that magicians and shamans and shamanesses had a tendency to use sexual techniques as well as other overload techniques  put them in a direct confrontational line with all established religions.  Most organised religions include some sorts of sexual restrictions and do not encourage spiritual experience by the many.  And this is why goats were often used by the religious fraternity as a symbol of  ‘evil’ as the prime objective of most religious organisations was to stamp out shamanism and magic as being competitors to the organised religion they wished to introduce.

How do you ensure that the old forms of belief – the shamanic and magical practises -  are eradicated?  You depict them in as many artistic forms as you can but with the addition of the epithet ‘devil’ - they are ‘evil’ and relate to ‘the devil ‘ – the personification of evil. 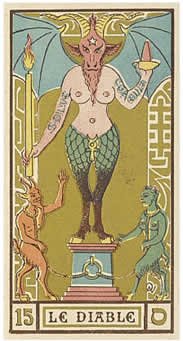 Tarot cards were used both as a means of preserving ideas and a means of hiding old truths.  Here we have a Tarot card purporting to be of the ‘Devil’.

The text Solve and Coagula on the Wirth card is important.
The phrase was used in alchemy.  "Solve" or "solutio" refers to the breaking down of elements and "Coagula" refers to their coming together. Superficially this is described as the process of ‘transmuting’ base metal into gold or arriving at the Philosopher's stone.  But this is purely figurative.

The real meaning is the breaking down of the ego and the soul of a person and the reconstruction that takes place on the spiritual path - rebirth.  So nothing to do with the devil in reality, although clearly demonised by some.  “Solve et Coagula expresses transmutation from base to a finer state, the perpetual goal of spiritual growth”.

Finally, in order to further eliminate shamanism and magic, religious organisations often blamed shamans and magicians for all sorts of unrelated events and from this we get the symbol of the scapegoat. 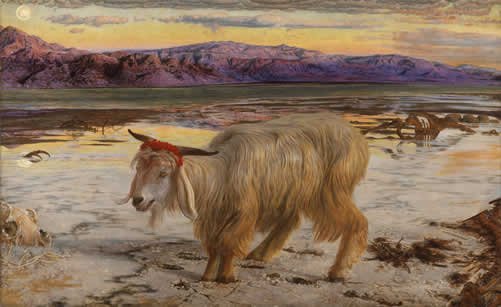