The earliest cult images of Dionysus show a mature male, bearded and robed. He holds a fennel staff, tipped with a pine-cone known as a thyrsus. Later images show him as a beardless, sensuous, naked or half-naked androgynous youth: ..In its fully developed form, his central cult imagery shows his triumphant, disorderly arrival or return, as if from some place beyond the borders of the known and civilized. His procession (thiasus) is made up of wild female followers (maenads) and bearded satyrs with erect penises. Some have the thyrsus, some dance or play music. The god himself is drawn in a chariot, usually by exotic beasts such as lions or tigers, and is sometimes attended by a bearded, drunken Silenus. .....

Once, Dionysus found his old school master and foster father, Silenus, missing. The old man had been drinking, and had wandered away drunk, and was found by some peasants, who carried him to their king (alternatively, he passed out in Midas' rose garden). Midas recognized him, and treated him hospitably, entertaining him for ten days and nights with politeness, while Silenus entertained Midas and his friends with stories and songs. On the eleventh day, he brought Silenus back to Dionysus. Dionysus offered Midas his choice of whatever reward he wanted.

Midas asked that whatever he might touch should be changed into gold. Dionysus consented, though was sorry that he had not made a better choice. Midas rejoiced in his new power, which he hastened to put to the test. He touched and turned to gold an oak twig and a stone. Overjoyed, as soon as he got home, he ordered the servants to set a feast on the table. Then he found that his bread, meat, daughter and wine turned to gold.

Upset, Midas strove to divest himself of his power (the Midas Touch); he hated the gift he had coveted. He prayed to Dionysus, begging to be delivered from starvation. Dionysus heard and consented; he told Midas to wash in the river Pactolus. He did so, and when he touched the waters the power passed into them, and the river sands changed into gold. 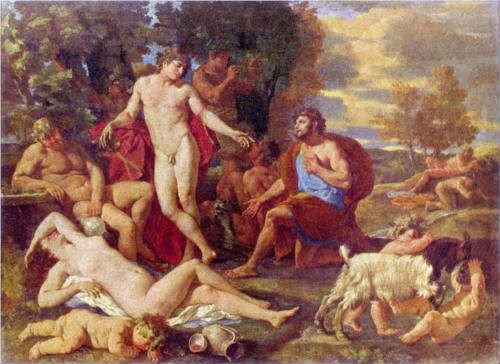