Athura  was a geographical area within the Persian Achaemenid Empire held by the last nobility of Aššur (Akkadian), known as Athura (Neo-Aramaic) or Atouria (Greek), during the period of 539 BC to 330 BC as a military protectorate state of Persia under the rule of Cyrus the Great. Achaemenid royal inscriptions list it as a dahyu, a concept generally interpreted as meaning either a group of people or both a country and its people, without any administrative implication.

The Neo-Assyrian Empire collapsed after a period of violent civil wars, followed by an invasion by a coalition of some of its former subject peoples, the Iranian peoples (Medes and Persians), Babylonians, Scythians, and Cimmerians in the late 7th century BC, culminating in the Battle of Nineveh, and Assyria had fallen completely by 605 BC.

Between 605 and 559 BC, Assyria was divided between the Median Empire to the east and the Neo-Babylonian Empire to the west. Both parts were subsumed into the Achaemenid Empire in 539 BC. In Herodotus' account the Ninth Tributary District comprised "Babylonia and the rest of Assyria", and excluded Eber-Nari.

The artefacts including this one demonstrate that despite all these constant political upheavals, the belief system of the people there appears to have remianed rock solid for thousands of years. 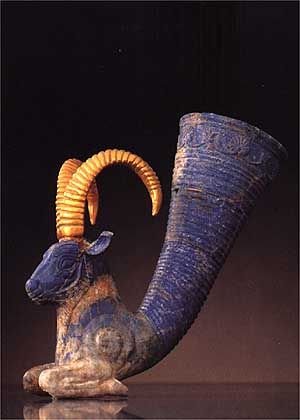