As with all the cards, Crowley has gone way beyond the symbolism intended and created something totally unique, but in doing so he has partly obscured the fundamental meaning of the card.  I quote from his Book of Thoth

"This card is attributed to the letter He’, as has been explained elsewhere. It refers to the Zodiacal sign of Aquarius, the water- bearer. The picture represents Nuith, our Lady of the Stars. For the full meaning of this sentence it is necessary to understand the first chapter of the Book of the Law. The figure of the goddess is shown in manifestation, that is, not as the surrounding space of heaven, shown in Atu XX, where she is the pure philosophical idea continuous and omniform. In this card she is definitely personified as a human-seeming figure; she is represented as bearing two cups, one golden, held high above her head, from which she pours water upon it. "

From this we can deduce that Crowley did not understand the latter stages of the spiritual path or he had his own agenda here.

There is a point when the hot spirit output and the cool spirit input are balanced, at which point either through a kundalini experience or through a more gentle 'awakening' the energy starts to simply circulate round and round in a loop not from high to low but in balance.  The Rider Waite card best describes this because it shows the pool of stored energy - the dan Tien - from which energy is drawn and returns in a cycle.  Instead of access to the two tunnels one then, figuratively speaking has access to the Higher spirit directly - a star.

"From the golden cup she pours this ethereal water, which is also milk and oil and blood, upon her own head, indicating the eternal renewal of the categories, the inexhaustible possibilities of existence.
The left hand, lowered, holds a silver cup, from which also she pours the immortal liquor of her life. (This liquor is the Amrita of the Indian philosophers, the Nepenthe and Ambrosia of the Greeks, the Alkahest and Universal Medicine of the Alchemists, the Blood of the Grail; or, rather, the nectar which is the mother of that blood. She pours it upon the junction of land and water. This water is the water of the great Sea of Binah; in the manifestation of Nuith on a lower plane, she is the Great Mother. For the Great Sea is upon the shore of the fertile earth, as represented by the roses in the right hand corner of the picture. But between sea and land is the “Abyss”, and this is hidden by the clouds, which whirl as a development of her hair: “my hair the trees of Eternity”. (AL. I, 59).
In the left-hand corner of the picture is the star of Babalon; the Sigil of the Brotherhood of the A.’. A.’….
It will be seen that every form of energy in this picture is spiral. Zoroaster says, “God is he, having the head of a hawk; having a spiral force”. It is interesting to notice that this oracle appears to anticipate the present Aeon, that of the hawk-headed Lord, and also of the mathematical conception of the shape of the Universe as calculated by Einstein and his school. It is only in the lower cup that the forms of energy issuing forth show rectilinear characteristics. In this may be discovered the doctrine which asserts that the blindness of humanity to all the beauty and wonder of the Universe is due to this illusion of straightness. It is significant that Riemann, Bolyai and Lobatchewsky seem to have been the mathematical prophets of the New Revelation.
For the Euclidian geometry depends upon the conception of straight lines, and it was only because the Parallel Postulate was found to be incapable of proof that mathematicians began to conceive that the straight line had no true correspondence with reality. [The straight line is no more than the limit of any curve. For instance, it is an ellipse whose foci are an “infinite” distance apart. In fact, such use of the Calculus is the one certain way of ensuring “straightness”.]" 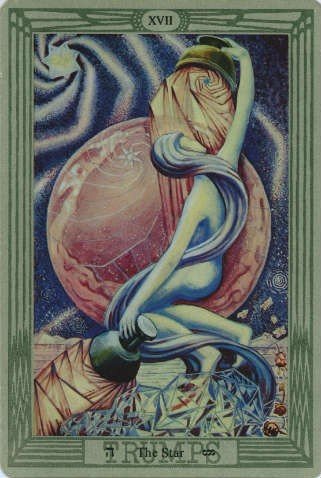