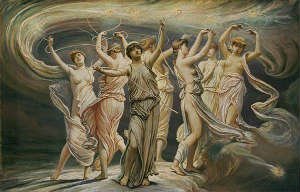 The Pleiades or Seven Sisters physically exist as an open star cluster in the constellation of Taurus. It is among the nearest star clusters to Earth and is the cluster most obvious to the naked eye in the night sky. This physical cluster has several meanings in different cultures and traditions, but perhaps the best known in Europe is that of the Greeks.

The Pleiades were the seven daughters of the titan Atlas and the sea-nymph Pleione. According to Greek legend, several of the most prominent male Olympian gods - Zeus, Poseidon, and Ares – pursued the seven heavenly sisters all of whom had children through the liaisons.

After Atlas was forced to carry the heavens on his shoulders, Orion began to pursue all of the Pleiades, and Zeus transformed them first into doves, and then into stars to comfort their father. The constellation of Orion is said to still pursue them across the night sky.

The Greek poet Hesiod mentions the Pleiades several times in his Works and Days.

"And if longing seizes you for sailing the stormy seas,
when the Pleiades flee mighty Orion
and plunge into the misty deep
and all the gusty winds are raging,
then do not keep your ship on the wine-dark sea
but, as I bid you, remember to work the land."
(Works and Days 618-23)

The Pleiades would "flee mighty Orion and plunge into the misty deep" as they set in the West, which they would begin to do just before dawn during October–November, a good time of the year to lay up your ship after the fine summer weather and "remember to work the land"; in Mediterranean agriculture autumn is the time to plough and sow.

The poet Lord Tennyson mentions the Pleiades in his poem Locksley Hall:

"Many a night I saw the Pleiads, rising through the mellow shade,
Glitter like a swarm of fire-flies tangled in a silver braid."

The loss of one of the sisters, Merope, in some myths may reflect an astronomical event wherein one of the stars in the Pleiades star cluster disappeared from view by the naked eye.