Nizami – Makhzanol Asrar (The Treasury of Mysteries) – from On the Ascension

Ecstasy
Moksha and nirvana
Out of body 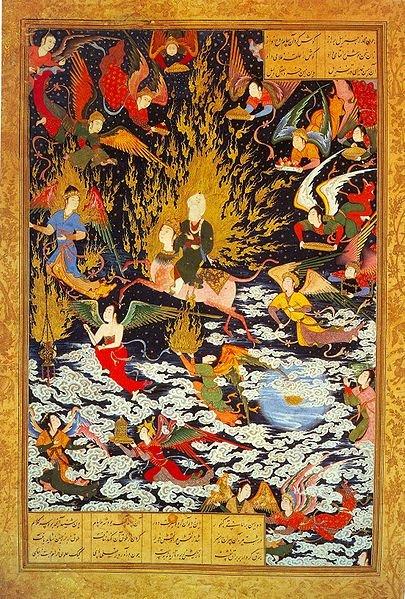 One midnight when the sun set
the world illuminating torch in motion,

The eyes of the nine heavens were his retinue;
Venus and the moon carried his torch.

He left the seven spheres, the four quarters, and the six dimensions
in the secret chamber of creation.

Day bade farewell to his footsteps;
night was in ecstasy at his advent.

The eyes of the strangers were heavy with sleep,
when he turned quickly away from sleep.

With the cage of the body, the bird of his heart flew away
from this prison to its own resting place.

The other birds, the angels, remained behind helpless.
Heaven threw down its cloak.

His body was lighter than the heart;
His divine bird flew with the cage

As he moved on step by step, he was seized and carried
further and further towards the divine bliss…..

Virgo, which received fresh hyacinth from him
threw the cluster at Leo

Venus, who weighs the night, held Libra in her hand
to estimate the honour of this night………

His healing breath poured balm on the tail
of the Scorpion of the azure realm.

When he hit the target with the arrow from the bow,
the poison left the kid which was on his table.

He became Joseph of the bucket like the sun;
he became Jonah of the fish like the water bucket

When he set the throne of the Pleiades on the sign Aries
the army of flowers pitched its tents on the plain.

The pleasure house of the earth was decked with the colours of spring
by the rose of that exalted garden of Paradise…..

His footsteps rent the curtain of the stars.
The shoulders of the angels bore his banner.

Midnight was filled with the musk of his lips.
The crescent moon was the shoe cast by his steed.

Like a partridge, the falcon flew dove-like
with the glory of the Phoenix

The Tree of Paradise touched the front of his robe
High heaven laid hands on his skirt……….

He was passed on like a rose from hand to hand up the turquoise carpeted stair,
till he reached the foot of the Throne

His fellow travellers threw down their shields;
they broke their pinions and shed their feathers.

He in amazement, like the strangers on the road
knocked on the door of that Threshold……….

He went on that road which must be travelled alone;
one foot knew not where the other would tread…..

When he drew his pen through all the words
he raised his banner above the heavens……….

When the journey to heaven ended, the heart and the soul
were charged with their own work.

His spirit reached a stage beyond time and space
through the great enlightenment of his heart.

He saw God as the Absolute.