Project management – this is the eleventh stage in the Method used for the Great Work,  the management of the whole project, the creation and adaptation of the actual plan, the selection of the resources needed, the allocation of resources to tasks, the monitoring of the resources – motivation, appraisal and admonishment of people.  It may also involve costing and budget management. 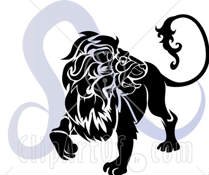 Strong, the king of the jungle, with the yellow or gold  of the Sun – the symbol of the Creator (see created).

The lion can both motivate and punish, lead the pack and kill its prey.

Fearless and dominant, but it can also be charismatic.  The natural lord and master of its territory.

And the lion used is a male lion – symbol of the masculine principle which is that of the intellect and the will the Conscious mind.  See Brain split [left brain and right brain].

Wikipedia
Leo  is the fifth astrological sign of the Zodiac...... In astrology, Leo is considered to be a "masculine", positive (extrovert) sign. It is also considered a fire sign and is one of four fixed signs.   Leo is ruled by the Sun. Being the fifth sign of the zodiac, Leo has been associated with the astrological fifth house