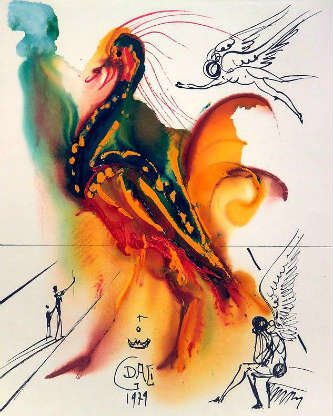 The phoenix is the bird that symbolically describes Annihilation.  It is consumed by flame  - is destroyed  - but is ‘born again’ -  resurrected from the dead.  In most myths and legends it is Red coloured linking it with the Fire level, but alchemically also with Dawn.

“The phoenix is described as ‘a mythical sacred firebird which originated in the Sub-continent of India in ancient mythologies mentioned in the Egyptian and later the Phoenician and the Greek Mythology’. In most depictions it is given colourful plumage and a tail of gold and scarlet or purple and blue.  In legends it has  a ‘500 to 1,000 year life-cycle’, near the end of which it builds itself a nest of myrrh twigs that then ignites; both nest and bird burn fiercely and are reduced to ashes, from which a new, young phoenix or phoenix egg arises, reborn anew to live again. The new phoenix is destined to live as long as its old self. In some stories, the new phoenix embalms the ashes of its old self in an egg made of myrrh and deposits it in the Egyptian city of Heliopolis (sun city in Greek). The bird was also said to regenerate when hurt or wounded by a foe, thus being almost immortal and invincible — it is also said that it can heal a person with a tear from its eyes and make them temporarily immune to death”.

The life cycle attributed to the bird is connected with beliefs in the number of reincarnations a person undergoes before they undergo rebirth on the spiritual path.

The Phoenix is perhaps the best known symbol of purification and annihilation, however, a number of other alternative birds are also used symbolically:

There are too many to describe individually, but they show the almost universal symbolism of this process.