Ancient Egyptian - The symbolism of the bennu bird

The phoenix was originally called a benu, and is known from the Book of the Dead and other Egyptian texts as one of the sacred symbols of worship at Heliopolis, closely associated with the rising sun and the Egyptian sun-god Ra.  The Greeks identified it with their own word phoenix φοίνιξ, from which we get the word.

The Bennu bird  was associated with the rising of the Nile, resurrection, and the sun. Because the Bennu represented creation and renewal, it was connected with the Egyptian calendar. According to ancient Egyptian myth, the Bennu created itself from a fire that was burned on a holy tree in one of the sacred precincts of the palace of Ra. The Bennu could be pictured as a grey, purple, blue, or white heron with a long beak and a two-feathered crest.  The example below may in fact not be true to colour as it is an artist's impression, altenatively the gree may signify 'renewal'. The Book of the Dead says,

“I am the Bennu bird, the Heart-Soul of Ra, the Guide of the Gods to the Tuat.” 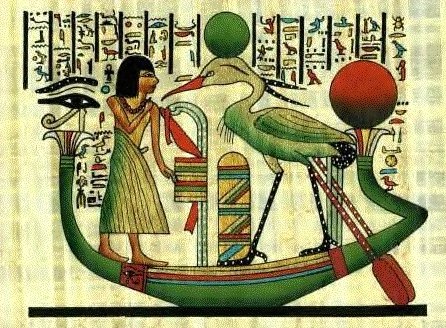