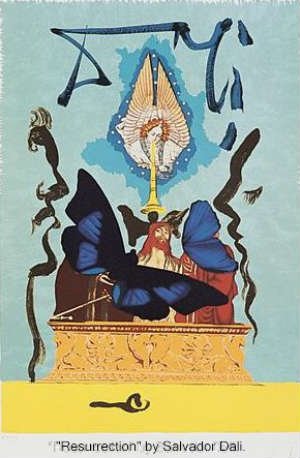 Here we need to ignore any Christian conceptions of the meaning of this term, as this section aims to describe the symbolic meaning of the term.

The original symbol for resurrection is linked to reincarnation and is also tied to the symbols of Day and Night.  For this you need to have open the picture and explanation of the Four Seasons and the Hours.

Going back to very early symbolism, for example that used in Ancient Egypt, the sun was seen each day to set in the West and disappear, only to reappear each morning in the East.  The sun was thus resurrected - it appeared to die, only to be born again in the morning.

At the time this symbolism was developed, reincarnation was almost universally accepted, thus the sun setting in the West became a symbol of death and its reappearance in the East at dawn became a symbol of birth, in the endless round of reincarnation followed by reincarnation.  One went round and round the wheel of life, disappearing at sunset and reapearing with a new Destiny and Personality at figurative Dawn.

In a sense the whole process was looked on as a sort of never ending revolving door, no one ever really died in the sense of obliteration, they just took on a new mask.

But there was also the belief that one could leave this wheel through the process of Initiation in the Mysteries, and by doing so moved on to 'higher planes of existence'  the road to the Sun or in really advanced individuals the road to the Stars.

To be looked on as any form of god, to earn respect and awe, one thus had to figuratively die and figuratively be born again, go through 'Night' in a bodied state.

Part of this entire process of Initiation involved the Rebirth experience.  But if we turn for a moment to the Wheel with six spokes, you will see there are a number of stages to this path that have to be taken.  Once you have been through rebirth, there is a stage of Purification and Relearning before the final Enlightenment stages leading to Annihilation.  This is often shown alchemically as a burning process - trial by fire and is as unpleasant as it sounds. 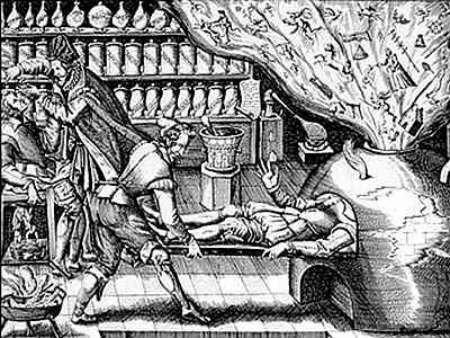 But if you survive all this, you are then 'annihilated' - I will quote the definition of this

"The final stage on the spiritual path and the ultimate spiritual experience.  It involves death.  The death of you as a personality.   Annihilation serves to obliterate the personality of all those who have fulfilled their destiny absolutely.  All Conscious thought transfers to the  Higher spirit  which takes over.   It feels like a near death experience as it unfolds except that it continues to completion.  ‘You’ meet your Higher spirit, but once you meet, you die, you join and then you die.  Your body is still living, but in effect it becomes ‘divine’ – a sort of ‘god’ completely in touch with the spiritual world at all its levels, because all bodily action is directed by your Higher spirit."

And this is resurrection.