The Ball Court in Chichen Itza is the largest in ancient Mexico, with the length of the 'playing field' more than one and a half times the length of a modern day football playing field.  I will now quote from a truly hilarious description in a guide book 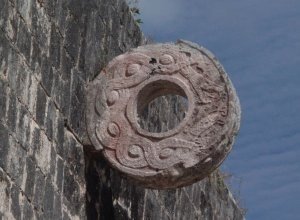 “It must have exhausted the players who had to run along its length keeping the heavy solid balls continuously in the air without using their hands.  The targets – seen as a sun and moon – are 20 foot above the floor and could have provided few opportunities for the ball to pass through the opening”.

My eyes watered at this last sentence and I am a woman with no balls.  There is a technique called Shuai, used in so called martial arts, but well known in all spiritually minded circles.  I think the ball court was used for shuai practise.  The practise was needed because the objective was to build up vast reserves of sexual energy one could use for a kundalini experience.

The ball players wore knee pads to protect their knees from any out of control  weights and a thick belt to support the weights.  The feathered headdresses show them to be initiates or to have a partially opened crown chakra.

The carvings on the benches according to the guide books ‘remind you of the gruesome consequences of losing the game- sacrifice by decapitation’.

Well no, this is symbolic, it is beheading, losing your head, annihilation by kundalini.

‘This unfortunate man [sic] has six serpents and a plant sprouting from where his head should be’, in effect it has been an extremely violent kundalini experience – mark 3 on the caduceus scale.  The plant is the crown chakra – in India it would be the cobra’s head. 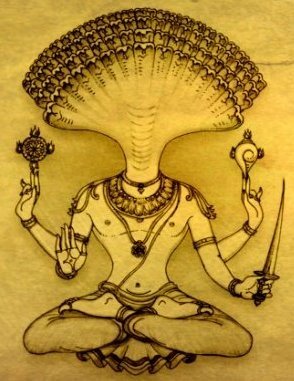 There is a central disk shown on some benches and this is the Sun.  This path of annihilation was the path of no reincarnation, known from the Hindus to the Sufis – it was the Red route as opposed to the Blue route to the Moon – the path of reincarnation.

I think those who had succeeded were taken to the Temple of the Jaguars to be given their scroll.  There are some enormous serpents decorating this temple some without and some with shields – another symbolic object.