In February 1927 Spencer held his first one-man exhibition at the Goupil Gallery. The centre piece of the exhibition was The Resurrection, Cookham which received rave reviews in the British press. The Times art critic described it as "the most important picture painted by any English artist in the present century. ..What makes it so astonishing is the combination in it of careful detail with the modern freedom of form. It is as if a Pre-Raphaelite had shaken hands with a Cubist."

The huge painting is set in the grounds of the Holy Trinity Church, Cookham, and shows Spencer's friends and family from Cookham and Hampstead, and others emerging from graves watched by figures of God, Christ and the saints. To the left of the church some of the resurrected are climbing over a stile, others are making their way to the river to board a Thames pleasure boat, others are simply inspecting their headstones. Spencer created the picture in the early years of his marriage to Hilda Carline and she appears three times in the picture. Overall, the Goupil exhibition was a great success with thirty-nine of the displayed paintings being bought, including The Resurrection, Cookham, which was purchased by Lord Duveen, who presented it to the Tate. 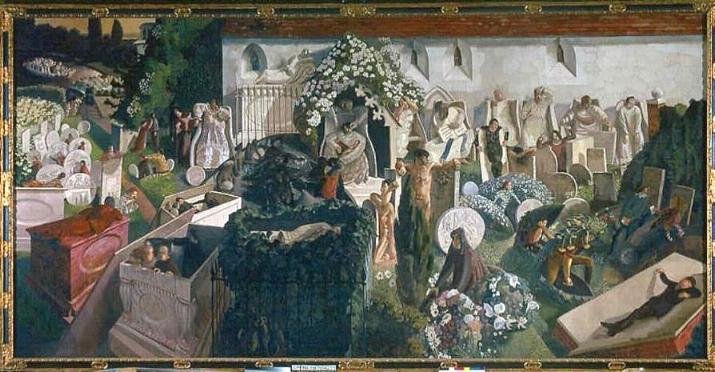 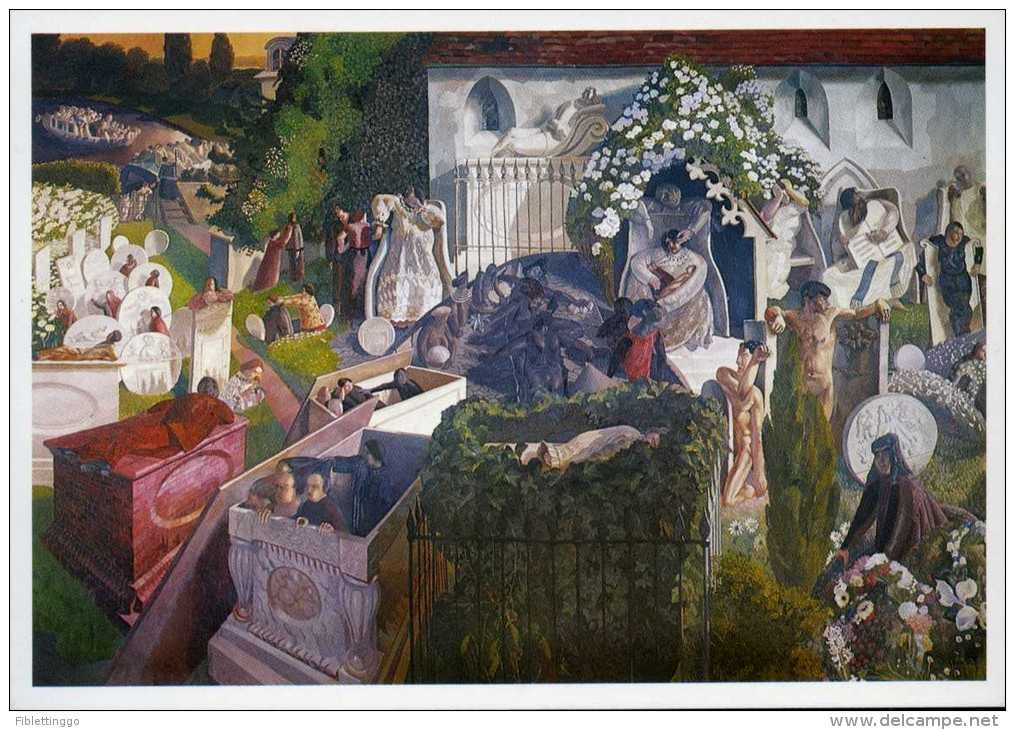 The Cookham Resurrection, or in its full title, The Resurrection in Cookham Churchyard, is one of the greatest of twentieth century English paintings. It offers so many levels of meaning that it can be considered a poem in paint.

The picture is large, 9' high by 18' long. At first sight it might appear a formless cluster of odd figures rising haphazardly from their graves. The figures are not the dead rising, however, but contemporaries of Stanley, all very much alive at the time he painted them, and intended to be so. They are his friends, they are his 'loves'. They are helping him 'resurrect' into a new world of enlightenment he is exploring within himself.

In the 1950s Stanley occasionally became the subject of films and newsreels. Invited in 1956 by John Read to describe the Cookham Resurrection for a BBC documentary film on the work of contemporary British artists, he was filmed standing in front of the picture, where he began his commentary with an introduction intended to set the theme of the painting. Everything has a sort of double meaning for me, he announced, there's the ordinary everyday meaning of things, and the imaginary meaning about it all, and I wanted to bring these things together, and in this first big Resurrection of mine you have a good example of this sort of thing, (i.e. he counts it as one of his more 'visionary' paintings, a successful transcendence for him from the material to the redemptive.)

This, Stanley continued, with a sweep of his arm towards the picture behind him, is Cookham church, more or less, and beyond is the river. The view he painted is from an imagined high-angle, with viewpoint raised so that the river is included. It cannot normally be seen from the churchyard at ground level.

At first glance it looks as though the church tower in the painting is missing. But no, the tower is there as the dark green patch to the left of the roof (as one views the painting.) The dark green patch is in fact ivy, painted with Stanley's usual scrupulous attention to detail, because he was recording the church not as it was at the time of painting, but as it was in his inspirational boyhood years.

But there are oddities to Stanley's depiction of it, as two admirers on a visit noted. They looked hard for the tomb alongside the wall in the painting on which rests a statue of a reclining gentleman. There was no sign of the gentleman, although in his commentary Stanley says That figure was always there. Perhaps this is because it was not in the form he paints it  - this is Cookham church, more or less. Then they noticed another oddity. The windows in Stanley's painting are different from the windows in actuality. It then dawned on them that Stanley's painted windows are the church windows as seen from the interior.

The same could apply to the statue of the reclining gentleman. Such effigies are normally to be found inside a church, and are more usually lying on their back with their head on a carved pillow. But Stanley's gentleman - knight, hero, philanthropist or even a less hairy echo in Stanley's mind of the celebrated Victorian statue of Father Thames - is reclining, apparently deep in thought, on a pillow on a kind of couch - or is the pillow a book or notepad in which the pages have been opened wide and folded back?

Putting these facts together suggests that Stanley did not intend his depiction of the church to be realistic. He was deliberately painting it through his memory-feelings - as he usually did such visionary work - even though he was only thirty miles or so away. In these details, he is recreating the peace he often enjoyed in the church, recalling a silence which, as he tells us elsewhere, was on one occasion so breathless that it allowed happy sounds of the nearby river-traffic to filter in, and so gave him the inspiration for his celebrated Swan Upping at Cookham.

Stanley is surely stating a major premise for this painting, as for much of his visionary work - that, for him, depiction of detail derived from his facility for contemplation in assembling the memory-feelings vital to its emotion, and that in this picture everything is resurrecting into a state of happiness and peace. Peace in Stanley's vocabulary here is perhaps best interpreted as implying a creatively detached state, unthreatening and uplifting, and persisting even when his surrounding circumstances were distressful physically.