W.Y. Evans-Wentz - The Fairy-Faith in Celtic Countries - The Pyramids as the site of the Mysteries 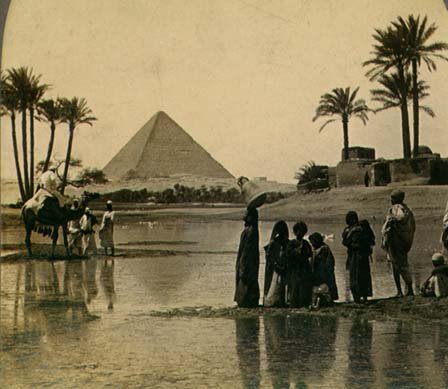 New Grange [in Ireland] and the Great Pyramid were both alike, in our opinion, and were the greatest places in the respective countries for the celebration of the Mysteries.

High up in the body of the Great Pyramid, after he had performed the long underground journey, typical of the journey of Osiris or the Sun to the Otherworld or the World of the Dead, we may suppose (knowing what we do of the Ancient Mysteries and their shadows in modern Masonic initiations) that the royal or priestly neophyte laid himself in that strange stone coffin without a lid, for a certain period of time--probably for three days and three nights. Then, the initiation being complete, he arose from the mystic death to a real resurrection, a true child of Osiris.

The Great Pyramid seems to be the most ancient of the Egyptian pyramids, and undoubtedly was the model for all the smaller ones, which 'always betray profound ignorance of their noble model's chiefest internal features, as well as of all its niceties of angle and cosmic harmonies of linear measurement'. Dr. Flinders Petrie says:--

'The Great Pyramid at Gizeh (of Khufu, fourth dynasty) unquestionably takes the lead, in accuracy and in beauty of work, as well as in size. Not only is the fine work of it in the pavement, casing, King's and Queen's chambers quite unexcelled; but the general character of the core masonry is better than that of any other pyramid in its solidity and regularity.'

And of the stone coffers he says:--

'Taking most of its dimensions at their maximum, they agree closely with the same theory as that which is applicable to the chambers; for when squared they are all even multiples of a square fifth of a cubit. . . . There is no other theory applicable to every lineal dimension of the coffer; but having found their proportion in the form of the Pyramid, and in the King's Chamber, there is some ground for supposing that it was intended also in the coffer, on just one-fifth the scale of the chamber.'

And here is apparent the important fact we wish to emphasize; the Great Pyramid does not seem to have been intended primarily, if at all, for the entombment of dead bodies or mummies while 'the numerous quasi-copies' were 'for sepulchral purposes ' without doubt.

There appears to have been at first a clear understanding of the esoteric usage of the Great Pyramid as a place for the ‘mystic burial’ of Initiates, and then in the course of national decadence the exoteric interpretation of this usage, the interpretation now popular with Egyptologists, led to the erection of smaller pyramids for purposes of actual burial.

And may we not see in such pyramid-like tumuli as those of Mont St. Michel, Gavrinis, and New Grange copies of these smaller funeral pyramids; or, if not, direct copies, at least the result of a similar religious decadence from the unknown centuries since the Great Pyramid was erected by the Divine Kings of prehistoric Egypt as a silent witness for all ages that Great Men, Initiates, have understood Universal Law, and have solved the greatest of all human problems, the problem of Life and Death?

Map of the Giza necropolis by Prisse de l'Avennes, 1878. 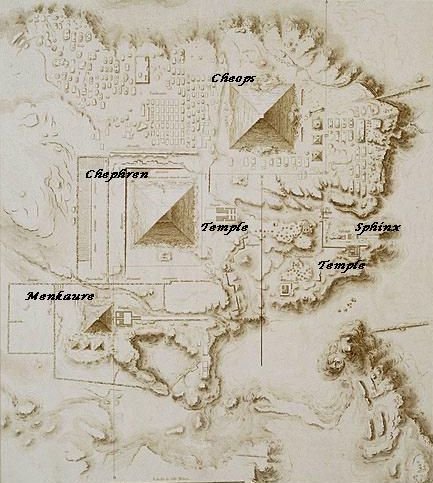