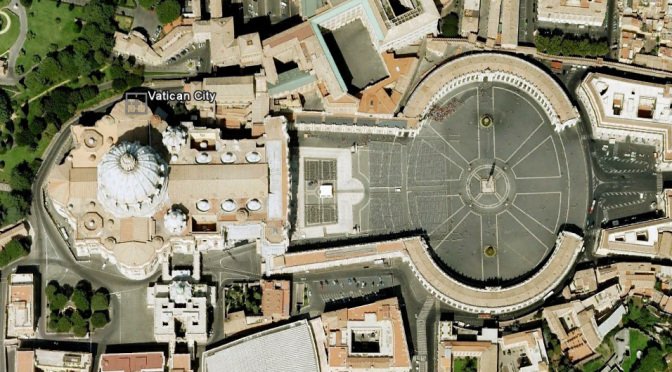 St. Peter's Square (Italian: Piazza San Pietro, Latin: Forum Sancti Petri) is a large plaza located directly in front of St. Peter's Basilica in the Vatican City, the papal enclave inside Rome, directly west of the neighbourhood or rione of Borgo. Both the square and the basilica are named after Saint Peter, an apostle of Jesus.  The entire area is laid out using the principles of sacred geography.

Historically even before the arrival of Christianity, this was a sacred site.  The area at the time was originally an uninhabited part of Rome (the ager vaticanus) and a shrine dedicated to the Phrygian goddess Cybele and her consort Attis remained active long after the Constantinian Basilica of St. Peter was built nearby.

Attis was a Greek god and his death and resurrection is frequently told in Greek myth.  He was also born of a virgin - Nana, who was a daughter of the river-god Sangarius.  Nana picked an almond and laid it in her bosom. The almond disappeared, and she became pregnant.

According to legend, this area became the site of martyrdom of many Christians after the Great Fire of Rome in AD 64. Ancient tradition holds that it was in this circus that Saint Peter was crucified upside-down.  But there may be symbolism built into this myth too as crucifixion and the hanged god or Hanged Man – as in the Tarot are both very important symbols – please use the links to have this explained.

As will be apparent if one looks at the plan of this part of the Vatican, St Peter’s square is not a square, it has been laid out to conform to the symbol of the cosmic Egg.  In looking at the plan one has to take into the overall picture the colonnades as well as the actual oval shaped space.  The colonnades are the Elements, the central space is the aether level

The other main features that are symbolically represented are:

The wheel with eight spokes

The photo' above shows the layout of the actual site from the air, below is the meaning of the symbolism.  The wheel shows the main stages of the Great Work – the main activities in the plan for the evolution of the universe.

At the centre of the square is an ancient Egyptian obelisk, erected at the current site in 1586.  The Vatican Obelisk was originally taken by Caligula from Heliopolis in Egypt to decorate the spina of his circus and is thus its last visible remnant.  Obelisks are important symbols in all sacred landscapes and the obelisk is a form of cone.  But it is clearly a cone of great ‘height’ meaning that it is nearer the centre symbolically.  Here it is at the very centre of the wheel and thus probably represents the Ultimate Intelligence [‘God’ if you prefer]. 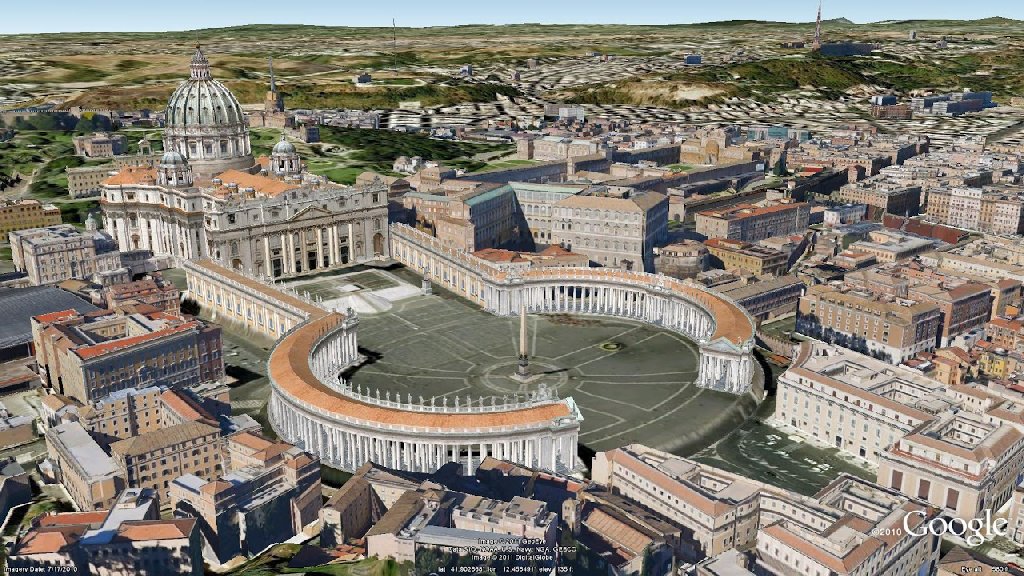 A granite fountain constructed by Bernini in 1675 matches another fountain designed by Carlo Maderno in 1613.  Fountains are themselves symbolic – see the description.

A fountain is symbolic of rising kundalini energy.  The fountain needs to be distinguished symbolically from both a spring and a waterfall, as fountain water goes ‘up’ symbolically – rises – whereas waterfall and spring water comes ‘down’ symbolically. 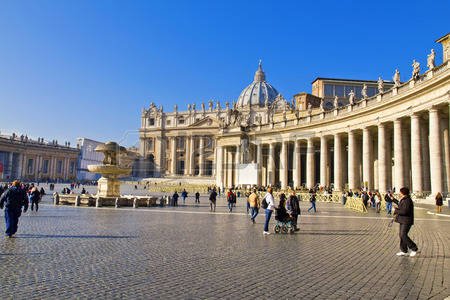 The reason there are two fountains is somewhat difficult to explain unless one has understood the model of the mind.  The cosmic egg is a model of the mind of everything, not just the mind of the universe, a sort of nested structure in minds are within minds.  Thus if one looks at the square as a symbol of our mind as opposed to the mind of God, then there are two channels of energy [in Indian thought Ida and Pingali] in any kundalini experience, furthermore to achieve balance - the final goal on the spiritual path one must balance the 'hot' energy of spiritual output [thoughts] with the 'cool' energy of spiritual input - the us the two fountains are in a sense representative of this balanced flow

We are aware this symbolism is very difficult to grasp, as it requires considerable understanding of most of the concepts used in the concept section; as such for novices it may be better left until they have become more familiar with the terms and their definition.