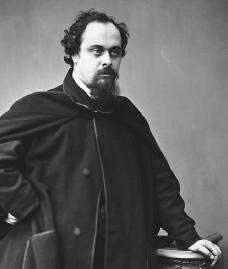 Dante Gabriel Rossetti (1828 – 1882) was an English poet, illustrator, painter and translator, working on English translations of Italian poetry including Dante Alighieri's La Vita Nuova.  He founded the Pre-Raphaelite Brotherhood in 1848 with William Holman Hunt and John Everett Millais. His work also influenced the European Symbolists and was a major precursor of the Aesthetic movement.

Born of Italian parents, he was described as "self-possessed, articulate, passionate and charismatic" but also "ardent".  He also appears to have been  hugely sensitive and very easily hurt.  Stung by criticism of his exhibited painting Ecce Ancilla Domini, for example, and the "increasingly hysterical critical reaction that greeted Pre-Raphaelitism",  Rossetti  rarely exhibited thereafter.

Rossetti's art was characterised by its sensuality.  His painting techniques were often novel and imaginative, he liked to experiment combining mediums and he used rich colouring and silky finishes.  He created a method of painting in watercolours, using thick pigments mixed with gum to give rich effects similar to medieval illuminations. He also developed a novel drawing technique in pen-and-ink. He was thus an innovator not just an artist.

He used an enormous number of symbolic themes – knights, gardens, gods, fruit, flowers, greek figures from myth and legend, figures from King Arthur, his whole being seemed drenched in spirituality.   Poetry and image are closely entwined in Rossetti's work; he frequently wrote sonnets to accompany his pictures, as such he was the complete artist.  Rossetti once wrote a story about a fictional early Italian artist inspired by a vision of a woman who bids him combine the human and the divine in his art.

His very early paintings are not that inspiring.  They were in oil and display the realist qualities of the early Pre-Raphaelite movement. His Girlhood of Mary Virgin (1849) and Ecce Ancilla Domini (1850) portray Mary as a teenage girl. But his paintings really start to come into their own once he met Elizabeth Siddall, and here we have the crux of what inspired Rossetti – women and beautiful, ethereal, classical looking women. 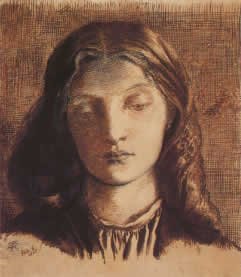 Rossetti met Elizabeth Siddal, in 1850.  She was an important model for the Pre-Raphaelite painters.  Over the next decade, she became his muse and his passion. They were married in 1860.  Elizabeth Siddal was herself a poet and an artist, but she was also addicted to laudunum.  Her first baby was stillborn due to her addiction and in 1862 she overdosed.   Rossetti found her unconscious and dying in bed.  She died aged only 33.

Rossetti was plunged into ever deepening depression and buried the bulk of his unpublished poems with her at Highgate Cemetery. He idealised her image as Dante's Beatrice in a number of paintings, such as Beata Beatrix.

Later the poems were rescued on the instigation of one of his friends.   They were published in 1870 but were viciously attacked as the epitome of the "fleshly school of poetry".  Their eroticism and sensuality caused offence to the prudish sensibilities of the day [making love was never discussed openly].  Rossetti's sonnet sequence The House of Life, was a complex series of poems tracing the physical and spiritual development of the intimate relationship he had had with Lizzie. Rossetti described the sonnet form as a "moment's monument". The House of Life was a series of interacting monuments to these moments – an elaborate whole made from a mosaic of intensely described fragments. It has been described as “Rossetti's most substantial literary achievement”.

Still stunned with grief, Rossetti returned to oil painting, and started to paint powerful close-up images of women in flat pictorial spaces characterised by dense colour.  Rossetti's depiction of women became over time almost obsessively stylised.  Lowry, the artist who collected his work, remarked that  : "They are not real women [...] They are dreams [...] He used them for something in his mind caused by the death of his wife. I may be quite wrong there, but significantly they all came after the death of his wife." 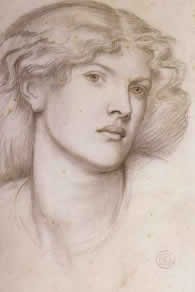 After Lizzie came a procession of new models.  Fanny Cornforth [shown left] became both a model and a lover and he portrays her “as the epitome of physical eroticism”.  Rossetti maintained Fanny Cornforth  in her own establishment  in Chelsea, and painted many images of her between 1863 and 1865. 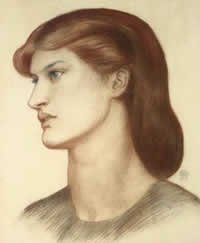 Then, in 1865 he discovered auburn-haired Alexa Wilding, who he engaged to model for him on a full-time basis. She sat for The Blessed Damozel and other paintings. She sat for more of his finished works than any other model, but there was no romantic connection with Rossetti.  He spotted her one evening in the Strand in 1865 and was immediately struck by her beauty.  He paid her a weekly fee to sit for him exclusively, and they shared a lasting bond.

Rossetti  became slightly mad after Lizzie's death.  He surrounded himself with extravagant furnishings and a parade of exotic birds and animals. In September 1869 he acquired a pet wombat, which he named "Top". It was brought to the dinner table and allowed to sleep in the large centrepiece during meals. His menagerie of exotic animals culminated in the purchase of a llama and a toucan which he dressed in a cowboy hat.  The llama, ridden by the toucan, were paraded round the dining table for his amusement. 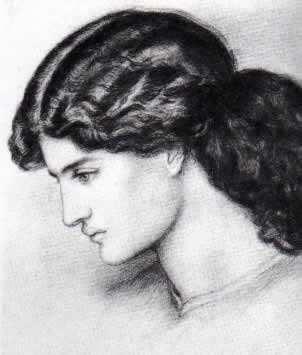 Jane Burden, the wife of his business partner William Morris, was next to be glamorised as an ethereal goddess.
Jane "consumed and obsessed him in paint, poetry, and life".
In 1869, Morris and Rossetti rented a country house, as a summer home, but it became a retreat for Rossetti and Jane Morris to have a long-lasting and complicated affair.  They spent summers there with the Morris's children, while Morris travelled.  In 1874, Morris cut Rossetti out of the business, and the polite fiction that both men were in residence with Jane at Kelmscott could not be maintained. Rossetti abruptly left Kelmscott in July 1874 and never returned.

But it is now worth adding that he started to be a regular user of chloral hydrate, originally against insomnia. He is quoted as saying to his friend Hall Caine: "Everyone has skeletons in their cupboards, and this is mine."  The savage reaction of critics to Rossetti's first collection of poetry contributed to a mental breakdown in June 1872, and although he joined Jane at Kelmscott that September, he "spent his days in a haze of chloral and whisky".  Toward the end of his life, he sank into a morbid state, darkened by his drug addiction to chloral hydrate and increasing mental instability. He spent his last years as a recluse at his home in Cheyne Walk.  On Easter Sunday, 1882, he died at the country house of a friend, where he had gone in a vain attempt to recover his health, which had been destroyed by chloral, as his wife's had been destroyed by laudanum.