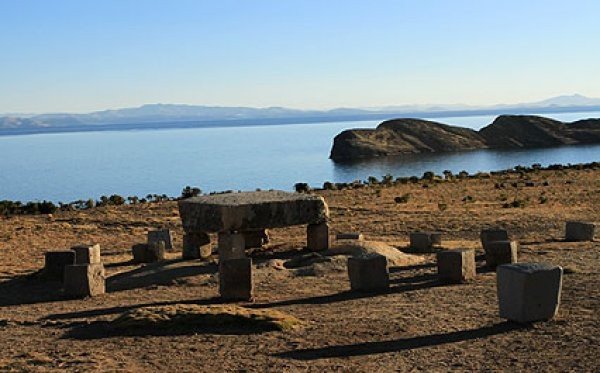 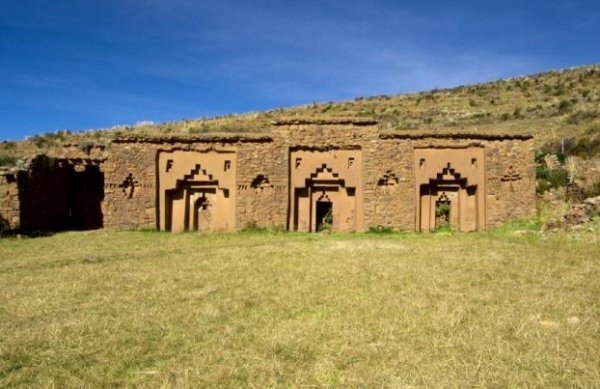 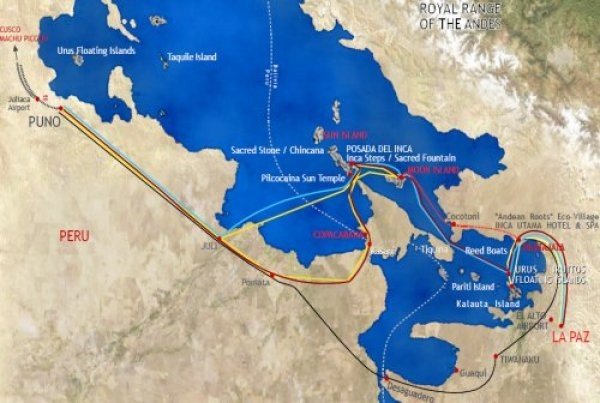 On the basis of its reputation and authority, this sanctuary was the third most important one for  the Peruvian Indians.

Actually, it comprised two magnificent temples, which were located on two separate islands of Lake Chucuito [Titicaca]. And since both islands are close to the town of Copacabana, we use this name to make reference to the sanctuary.

One of these islands was called Titicaca, and the other Coata [sic; for Coati]. The former was dedicated to the Sun, and the latter to the Moon. Both of them, along with the mainland adjacent to them, which is a boundary of Copacabana, fall within the province of Omasuyu, Diocese of Chuquiabo. The aforementioned town of Copacabana is located on a promontory projecting out from the mainland up to the Straits of Tiquina. This promontory extends out one league, and serving as its entrance is the town of Yunguyo, where the two beaches that surround this headland come so close together that it is actually an isthmus, more or less one mile wide.

The town of Copacabana is located by the shore of two pleasant inlets of the lake which are in view. The inlets are between two high steep hills. ….

The Inca fasted here for many days, abstaining from salt, meat, and aji [chile pepper], as was their custom. And on the many occasions when the Inca came to this sanctuary afterward, he became accustomed to removing his sandals two hundred steps before reaching it.

Since the Indians considered this to be an act of exemplary devotion, they made a gateway in the same place which was called Intipuncu, and this means gateway of the Sun. Besides this, the Inca king [Tupa Yupanqui] had many buildings constructed in order to enlarge and lend more authority to this shrine. The former temple was augmented with new and impressive buildings. In addition, it was ordered that other buildings be constructed for other purposes; these included a convent [sic] for mamaconas which was placed here, many magnificent lodgings and rooms to serve as a dwelling place for the priests and attendants, and one quarter of a league before one reaches the temple, there was an impressive tambo or inn for the pilgrims to stay in.

In order to keep them supplied, the Inca king had large storehouses built near Copacabana for provisions of food, clothing, and other supplies. The ruins of these storehouses remain to this day, and I have seen them myself. And even in these ruins the magnificence of the work can be seen, as well as the zeal for promoting public welfare of the one who exhibited the foresight to take such measures by means of which the people never went hungry in this land.

This certainly is admirable, especially taking into consideration the multitude of people who came here and how barren the land was.

Since the area starting from the straits or isthmus which I mentioned above between Yunguyo and Copacabana was considered to be a sacred place, the Inca king had this entrance closed off with a wall which he had made from one beach to the other. He had gates put along the wall with watchmen and guards to look over the people who came to the sanctuary on pilgrimages. According to what the Indians say, it was the Inca's will that the land be opened up so that the water from either side of the area would encircle or enclose the promontory; in this way the water would serve as a wall. And since the town of Copacabana was the most appropriate, accessible, and calm place (as far as the water was concerned) for an entrance to the island with the sanctuary, the Inca populated it with mitimaes selected from all the provinces of his kingdom, as well as with a large number of Inca nobles, and it was much enlarged both in the number of residents and the number of buildings.

Therefore, in this place, the same as in the other towns within his jurisdiction that were provincial capitals, the Inca king had a temple built for the Sun and for the other major gods………….

Since it seemed to the Inca king that the only thing lacking which could enhance the grandeur of this temple and shrine was the plant called coca, which was among the most highly esteemed offerings that they had, he decided to plant it on the island itself. In order to compensate for the plant's aversion to this highland location, he made up his mind to have such a deep place dug on the island that it would be warmer there. But carrying out such a difficult undertaking was impossible. Since the island is small and completely surrounded by water, moisture soon seeped in and stopped the work before a very deep hole could be dug. In spite of all that, they made such a large hollow that the coca was planted and it started to grow though this was accomplished with great difficulty.

But because of the barren land and the cold climate, the coca grew very poorly and with inferior leaves. And it certainly was a great feat to put this plant in such a place, since it requires a very warm climate. However, since the project was so unnatural, it did not last.

Besides the fact that the climate was so adverse, the high part of the gully caved in, burying the coca and along with it many of the Indians who were in charge of cultivating it. Therefore, the Inca king rescinded his order because it was too difficult to carry out.

But the Inca was not content with what had been done to decorate and enhance this sanctuary. He felt that he still had not entirely fulfilled his obligation and that he was not responding with prudence to the service of the Sun if he did not designate a woman or even women for the use and service of the Sun. Therefore, he decided to do it, and while he had this on his mind, he found a convenient way to carry it out.

It was the Island of Coata, which he dedicated to the Moon, giving it the name Coata or Coyata, which means 'of the coya,’ that is to say queen, and he constructed a magnificent temple on it. In the temple he placed a statue of a woman; this statue was gold from the waist up and silver from the waist down. The statue was the size of a woman, and it appeared to be an image of the Moon. Thus, along with the living women who were dedicated to the service of the Sun on the Island of Titicaca, there was this idol; it was a representation of the Moon and had the name of the Inca's wife.

Nevertheless, some hold that this statue was called Titicaca, and they say that it represented the mother of the Incas. Be that as it may, the statue was carried to the city of Cuzco on the orders of the Marques Francisco Pizarro, who sent three Spaniards for it.

Finally, the Inca enhanced this sanctuary whenever it was possible. He added expensive buildings to it, designated a large number of people to serve there, put priests and confessors there according to their customs, …. He enriched it greatly with tumblers of gold and silver, and among other things, he gave it a piece worthy of his royal glory; this was a very large brazier made of pure gold with lions to support it; two of the lions were silver, and the other two gold.

In addition to the priests and attendants who were always present for the services at this sanctuary, the Inca put two thousand Indians in it who were exempt from paying any tribute. Their only obligation was to clean up and maintain in good repair the two temples of the two islands and of Copacabana.

For these Indians and for the priests and mamaconas, the Inca had designated sufficient income to sustain them so that they would never shirk their duties. By taking these measures, the Inca achieved his aspiration of introducing the veneration of this ancient shrine throughout his entire kingdom. This veneration was so widespread that people came to this place on pilgrimages from everywhere.

And there was always a large gathering of people there from far away. Thus this place became so famous that its memory will live on among the Indians as long as they last.