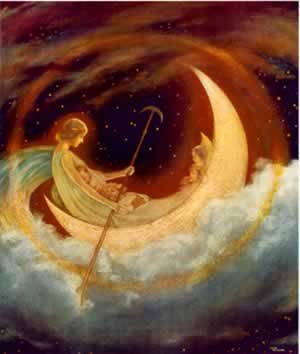 The Moon is symbolic of the Created – the repository of the work of the Creator.  The Moon only reflects the light that the Sun has created.  In other words, it is merely the holder of the System of the universe it is not active in creating it.  The Moon is feminine in all symbolic systems whereas the Symbolic Sun is male.

Analogously whereas the Creator role is like a master software package developer, the Moon is the keeper of that package, in effect is the package.  From her copies are created – baby systems are born to be implemented on all the physical things in the universe.

The metal corresponding to the moon is silver.  It is worth adding that Mohammed forbade the use of any metal in amulets except silver.

The Moon is also frequently associated with ideas, thought and imagination – the result of the creation process.

The Moon as the holder of software copies

It is from the symbolic Moon that life ultimately springs.  Copies of systems [a little plant system for example] are implemented on Earth from the Moon as ‘keeper’ of the system itself.

The Moon suffers fragmentation.  It starts off full and then gradually wanes.  This symbolism has profound significance when we think of how systems are analogously created and implemented.  Numerous copies of the software might be made and the warehouses become full of CDs ready to ship, then they are delivered and the warehouse is empty.

So the moon as warehouse – keeper of souls ready to be delivered to new babies gradually increases in size as the souls are stored there.  Then off they go from the moon to the babies to whom they are destined and the moon suddenly disappears, to become a new moon – empty not long after.  The symbolism is extraordinarily good and graphic as long as one does not take it literally and assume our physical moon holds baby souls!

The Moon as symbol of evolution

Systems in the physical world do not last for ever, they are replaced.  So we might have a payroll system or an accounts system, which becomes obsolete and may be replaced and removed.  Thus in any business we are constantly changing our systems, adding new programs, removing old ones, streamlining or updating them to suit the change in the business.

Evolution is the same.  We see species come and go.   Evolution is an ongoing process, with probably constant change – both major and minor.  When an extinction occurs caused by a meteorite hit on earth, a massive amount of the underlying software that controlled species such as the dinosaurs or the various plants of the time becomes redundant.  And the Moon wanes.

But where a burst of creativity occurs – new life forms that need new software – new plants new animals and so on, extra software is added which can be implemented into our physical world – the Earth.  The Moon waxes.

Thus the symbolic Sun continually creates and destroys, the Moon reflecting the creation and destruction process can become bigger as more software is added or smaller as software is removed.

The Moon and reincarnation

Symbolically, the soul or Higher spirit on death goes ‘to the Moon’ if it is to be reincarnated, a Higher spirit  that has escaped reincarnation goes figuratively speaking to the Sun.

Symbolically, the Moon reabsorbs forms and recreates them.  Thus ‘only that which is beyond the Moon can transcend becoming’ – ie becoming physical again.  For Plutarch, the souls of the just were ‘purified’ in the Moon.  Rene Guenon believed that in the sphere of the ‘moon’ the soul was severed from the Higher spirit.