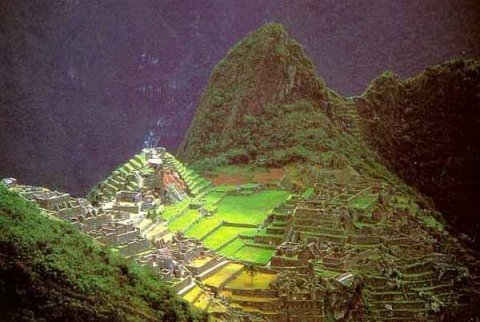 They did this in Knotty Ash too on the occasion of the last eclipse - and it worked, the serpents and lions went away!!

Joking apart - the lion was a symbol of the sun, so they did know the cause.

After the Sun, the Moon and the Stars follow, according to their natural order, and not the order that the Indians had in worshiping them because if we were to go by their worship, this place must be reserved for the Thunder.

In authority and honor the Thunder ranked second after the Sun, as we will soon see. The Moon was considered to be a deity for the same reasons that led them to respect the Sun-that is, owing to the Moon's admirable beauty and the great benefits that she bestows on the world.

They imagined that the Moon looked like a woman, and the statue of the Moon that they had in the Temple of the Sun was in the form of a woman.

This statue was cared for by women who held the rank of priestess, and when the statue was taken outside, these women themselves carried it on their shoulders. They had as many foolish ideas about the eclipse of the Moon as they did about that of the Sun.

They said that when there was an eclipse of the Moon a [mountain] lion or a serpent was attacking in order to tear her apart, and for that reason they shouted at the top of their voices and whipped their dogs so that they would bark and howl. The men made ready by blowing their trumpets, beating their drums, and yelling as loud as they could. They hurled arrows and spears at the Moon, and they made menacing gestures with their spears, as if they were going to wound the lion and the serpent.