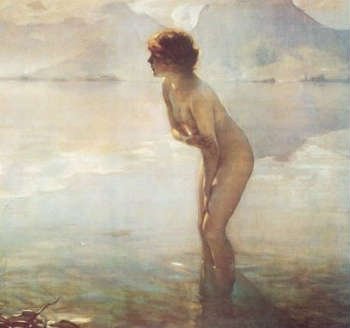 In Eastern medicine whether Indian or Chinese there is the concept of a reservoir of energy .

Thus although one may receive energy via the chakras,  one may also store energy in these reservoirs or pools of energy.  The concept has its physical equivalent in the endocrine system as well as major organs like the liver that stores glucose.  Thus the idea is actually very sound, it is just that we are viewing it now at a spiritual level and not a physical level

Dan tien, for example,  is loosely translated as "elixir field", "sea of qi", or simply "energy center" within Traditional Chinese medicine as well as a number of systems of spiritual practises such as Qigong, Taoism and Buddhism.

All our organs are viewed from the point of view of the symbol system as lakes, ponds, pools and reservoirs depending on how big they are.  Furthermore, they correspond [as one would expect] with very specific organs.

There is a direct correspondence, for example, between the ‘lake’ that is the Lower Dan Tien  and the Reproductive system which both produces hormones and stores hormones such as FSH and LS as well as oxytocin, progesterone, testosterone, oestrogen and so on.  The lower dan tian has been described to be "like the root of the tree of life".

There is also a direct correspondence between the ‘lake’ that is the Middle Dan Tien and the  heart, which is associated with storing ‘life energy’and with respiration and health of the internal organs.  There appears to be a correspondence here with the  thymus gland and heart.  The heart can produce oxytocin.

Finally there is also a direct correspondence between the ‘lake’ that is Upper Dan Tien (Shang Dantian)whose location is on forehead between the eyebrows [the third eye], associated with the ‘energy of consciousness and spirit’ (shen) and the pineal gland and the pituitary gland another source of  oxytocin.

So for those physically minded folk the science is actually sound.

The brain in this context is also treated as an organ, symbolically it is full of fish!

Symbolically one often sees references to ways of channelling the ‘water’ from Rivers and streams into these reservoirs and lakes with the objective of having that ultimate of spiritual experience – enlightenment of some sort.  The Lake at the base of the spine contributes to a kundalini experience and we thus have a link symbolically between streams and rivers of energy coming in being stored in a lake and then issuing as a fountain!