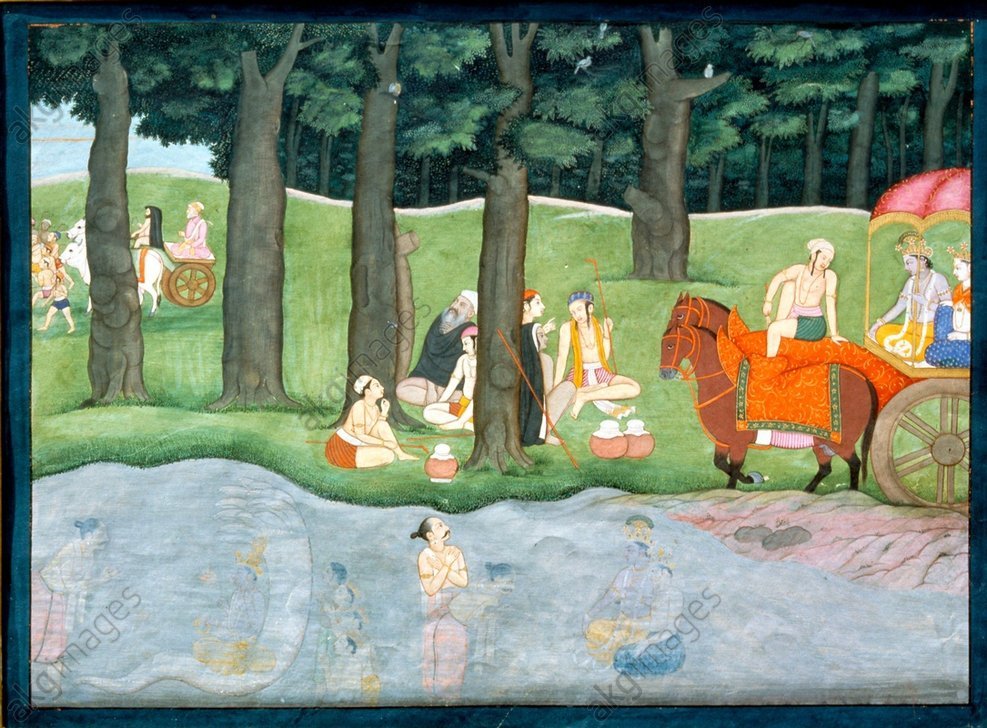 Chapter 26 - Akrura has a Vision

(O janamejaya!) Entering the residence of nandagopa along with keshava (kR^iShNa), the one who gives much in charity (akrUra), spoke in a pleasing manner addressing all the elderly gopa-s, kR^iShNa and the son of rohiNI (balarAma).

Son! Let us go to the city of mathura, tomorrow, for our good.

All the cow tenders of vraja along with their families are ordered by kaMsa to pay their annual taxes as required.

kaMsa has arranged a grand bow festival with great pomp and splendour. You can watch this pompous festival and also meet your relatives.

You can meet your father vasudeva, who is always sorrowful and who always laments about his sons who were killed.

He is always troubled by the evil minded kaMsa. The old man is distressed by sorrow and weakened internally.

Separated from you, he is terrified of kaMsa. He is burning internally with anxiety, day and night.

govinda, you can also see your mother, devakI , whose breasts were not sucked by her sons. She has a splendour of a goddess but she has become lusterless, suffering from miseries.

She has become thin due to the grief of her sons. She is eager to see you. She is burning with the sorrow of separation, like the holy cow, surabhI, without her calf.

Her eyes have sunk. She laments daily. She dresses in old cloths. She is like the moonlight swallowed by the mouth of rahu.

Everyday she thinks of seeing you. Every day she is waiting for you. The poor soul is getting weakened day by day because of sorrow regarding you.

She has not heard your sweet talk since you were separated from her from childhood. Lord! She does not know the beauty of your face, beautiful as moon.

Son! Even though devakI gave birth to you, she still suffers much. What is the use of having a child for her? It would have been better for her to remain childless.

Women having no children have only one grief. The woman having a son without any association will grieve for ever.

You are equal to indra in qualities and capable of protecting others. The woman to whom you are a son should never grieve.

Your elderly father and mother are living like servants of others. The evil minded kaMsa is abusing them constantly because of you.

If devakI, your mother is to be respected like earth, She should be saved from the ocean of sorrow.

If you give vasudeva, who deserves all comforts, the pleasure of your company as son, kR^iShNa, you will be doing your duty.

You conquered the sinful serpent from the lake of yamunA.

You lifted the govardhana hill from the earth.

You felled the powerful ariShTa, intoxicated with pride.

You killed the wicked horse, keshi, who was fond of taking the lives of others.

You should think of freeing your elderly parents from sorrow and follow the right way as required.

All the people who saw kaMsa abusing your father in the assembly were unhappy and shed tears of sorrow from their eyes.

kR^iShNa! your mother devakI is suffering many sorrows like destruction of her conceptions, because of kaMsa.

It is said that if a son is born to a mother and father, he should repay his debts suitably.

kR^iShNa! If you do like this, it will be a blessing for your parents. O sinless one! They will be free of their sorrow and you will be doing your duty.

(O janamejaya!) kR^iShNa understood the matter. The splendorous kR^iShNa did not get angry. He concurred with the valiant akrUra.

The gopa-s, with nandagopa at the forefront heard the words of akrUra. They began to proceed according to kaMsa's order.

The residents of vraja made preparations for the journey. The elderly men placed various items on the carts and proceeded.

Bulls and ghee as tax and buffaloes and other gifts along with milk and curd as tribute were arranged according to their capacity.

Preparing all these gifts, readying the carts and arranging tax, all the leaders of gopa-s assembled for the journey.

akrUra spent the full night, awake, talking with kR^iShNa. The son of rohiNi (balarama), also participated (in the discussion).

In the pollution-less morning, when the birds began to chirp, as the rays of moon became dim at the end of the night,

As the stars began to disappear in the sky which appeared reddish, as the earth became moist with dew due to the morning wind,

As the stars appeared dim and looked like sleeping, as the darkness of night vanished and the sun rose,

With its rays weakened, the moon lost its splendour. One (the moon) lost its form while the other (sun) grew its body.

The cows began to crowd on the land of vraja. The sound of churning curd could be heard from everywhere.

The calves were tied with good ropes. The gopa-s started crowding the streets of vraja.

There, loading the carts with many items, those who boarded the vehicles, left quickly.

The three, kR^iShNa, the son of rohiNI and the one who gives much in charity (akrUra), went in the chariot like the lords of the three worlds.

As they reached the banks of yamunA, akrUra said to kR^iShNa: Let us stop the chariot here and give rest to the horses.

feed grass and water to the horses and watch the decorated horses and the chariot. Son! Wait for me here.

I will worship the lord of serpents (sheSha), the lord of all worlds, in this lake of yamunA, with the chanting of the divine bhAgavata mantra.

He is the incomprehensible bhAgavata. He maintains all the worlds. He is auspicious with the svastika mark on his forehead. I offer my obeisance to the great serpent, having thousand heads, the lord anantha, dressed in blue.

Whatever poison that emanates from that lord of dharma, is equivalent to nectar (amR^ita). I will consume that like a deva.

Seeing the lord adorned with the mark of svastika, having split tongues, decorated by shrI and surrounded by group of serpents will lead to peace and happiness.

Till I return from the best lake (of yamunA), the residence of the lord of serpents, both of you sit here and wait for me.

Then kR^iShNa, who was pleased, said: O Right minded one! Go ahead without delay. We are unable to wait for long without you.

The one who gives much in charity (akrUra) took a full dip in the lake of yamunA. There he saw the world of nAga-s in rasAtala as it is.

In the middle (of nAgaloka), with thousand heads, with a flag showing a golden palm leaf, carrying a plough in one hand (he saw sheSha). A club (musala) was kept near his belly.

Wearing a blue dress, with white complexion and seated on a white seat, wearing one ear ring, intoxicated, with eyes looking like sleepy lotus flowers,

seated on the white seat, created by his own serpentine body, adorned by svastika and varAha and holding the earth,

with his head slightly inclined to the left adorned with golden ornaments and his chest covered with a garland of golden lotus flowers,

the killer of enemies with his long arms smeared with paste of red sandal, the one with a lotus flower from his navel, with white complexion, attractive with his effulgence,

he (akrUra) saw, the king of serpents (sheSha), the lord of ekArNava (ocean at the time of deluge), being worshipped by great serpents (having split tongues) such as vAsuki.

Serpents named kambala and ashvataru were fanning the king of serpents, the lord, seated on the righteous seat.

The serpent lord vAsuki was standing near him . The king of serpents was surrounded by serpent ministers lead by karkoTaka.

They performed abhiSheka with divine golden pots covered with lotus flowers on the lord of serpents with water from ekarnava (ocean at the time of deluge).

He (akrUra) saw viShNu, dark as a rain cloud, dressed in yellow clothes, with the mark of shrIvatsa adorning his chest , seated on his (sheSha's) lap.

akrUra saw another person, lord sa~NkarshaNa (balarAma), with a white complexion equal to moon, without a divine seat.

There suddenly, akrUra tried to speak to kR^iShNa. But, kR^iShNa, with his splendour, froze his words.

Seeing the eternal bhAgavata among the serpents, the one who gives much in charity (akrUra) rose up from the water, highly astonished.

There also he saw bala (balarAma) and keshava (kR^iShNa) with wonderful bodies, seated on the chariot, looking at each other.

Out of curiosity, then, akrUra, again took a full dip in the water and saw the white faced deva, (ananta), dressed in blue, being worshipped.

akrUra saw lord kR^iShNa, seated on the lap of the thousand faced lord (ananta), being worshipped.

akrUra again rose up quickly from the water. Chanting the mantra in his mind, the one who gives much in charity (akrUra), returned to the chariot along the same way.

When akrUra arrived there, kR^iShNa asked happily: "O bhAgavata! What is happening in the nAga world, at the lake of yamunA?

You took a long time and you are delayed due to some diversion. You might have seen some wonder there. Your mind is excited."

He replied to kR^iShNa: "What wonder occurs in this world of fixed and moving beings, without you?

kR^iShNa, there I saw a wonder, rare in this world. I see it here as I saw there and I am immensely happy.

I am involved with a most wonderful incident in this world. kR^iShNa, I do not want to see anything more wonderful than this.

Now, lord! let us proceed to the city of kaMsa, and reach there, before the sun sets at the end of the day.

Thus this is the translation of the twenty-sixth chapter of viShNuparva of harivaMsha, khila of shrimahAbhArata, akrUra has a vision. 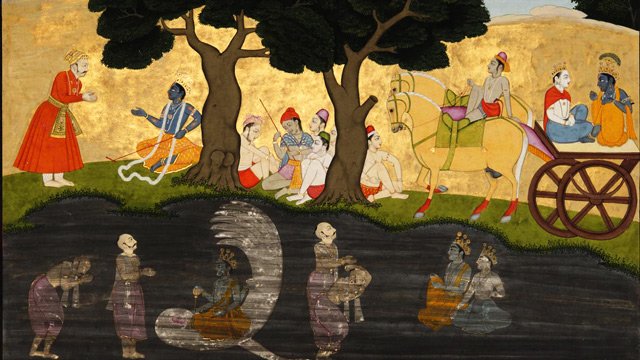