Egyptian Book of the Dead - Spell 110

Lakes can be found at many different levels – air, water, earth, fire and so on and have a different meaning depending on the level.   Ancient Egyptian cosmology recognised quite a large number of lakes…… 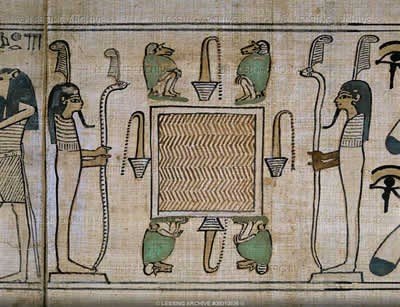 Here begin the spells of the Field of Offerings and spells of going forth into the  day;

of coming and going in the realm of the dead;

the abode of the Great Goddess, the Mistress of Winds;

having strength thereby, having power thereby,

Now it befell that I rowed in the bark in the Lake of Offerings; I took it from the Limbs of Shu, and his northern stars, his Limbs, were set in due order; I rowed and arrived at its waterways and towns, I fared southward to the god who is in it, because I am he who would rest in his fields...........

I am one whom Hotep knows, I row on its waterways, I arrive at its towns.  My utterance is mighty, I am more acute than the spirits and they shall not have power over me.