Blake, William - Around Golgonooza lies the land of death eternal 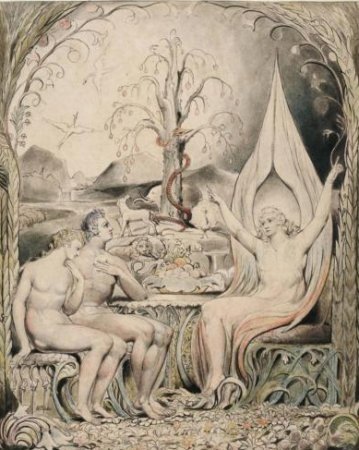 Around Golgonooza lies the land of death eternal; a land
Of pain and misery and despair and ever brooding melancholy
In all the twenty seven heavens, numbered from Adam to Luther
From the blue Mundane shell, reaching to the vegetative earth

The vegetative universe opens like a flower from the earth’s centre
In which is eternity.  It expands in stars to the mundane shell
And there it meets eternity again, both within and without
And the abstract voids between the stars and the satanic wheels

There is the cave; the rock, the tree, the lake of Udan Adan
Formless, indefinite,
The forest [of error]; and the marsh and the pits of bitumen deadly
The rocks of solid fire, the ice valleys, the plains
Of burning sand, the rivers, cataract and lakes of fire
The islands of the fiery lakes; the trees of malice; revenge
And black anxiety and the cities of salamandrine men

The land of darkness flamed but no light and no repose
The land of snows of trembling and of iron hail incessant
The land of earthquake and the land of woven labyrinths
The land of snares and traps and wheels and pitfalls and dire mills
The voids, the solids and the land of clouds and regions of waters
With their inhabitants; in the twenty seven heavens beneath Beulah
Self righteousnesses conglomerating against the Divine vision
A concave earth wondrous, chasmal, abyssal, incoherent
Forming the mundane shell; above; beneath; on all sides surrounding
Golgonzoola