The forest is yet another Cell in the Matrix.

A forest, in contrast with a wood, is a symbol of one’s deeper more basic instincts – survival, sex, defence, attack, food -  and some very basic emotions such as fear, rage, lust, jealousy, envy and so on.

It represents whatever is dark and untameable in our character – the reptilean brain and the autonomic system. 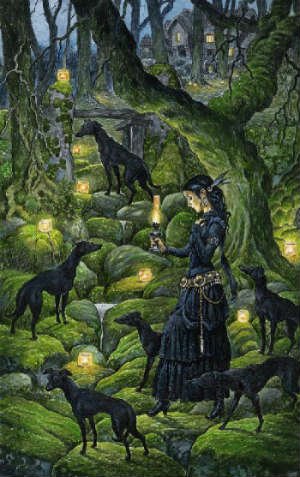 Within the general symbolism of landscape, forests occupy a notable place, and are often found in myths, legends and folk tales... The forest is the place where vegetable life thrives and luxuriates, free from any control or cultivation.  And since its foliage obscures the light of the sun, it is therefore regarded as opposed to the sun's power and as a symbol of the earth.... the forest is also a symbol of the unconscious.
Jung maintains that the sylvan terrors that figure so prominently in children's tales symbolise the perilous aspects of the unconscious, that is, its tendency to devour or obscure reason.  Zimmer stresses that, in contrast to the city, the house and cultivated land, which are all safe areas, the forest harbours all kinds of dangers and demons, enemies and diseases.

The symbolism is very old and is found in numerous older myths and legends.  Why were and are forests sometimes seen symbolically in visions as places of fear?   We need to look at the historical context of the symbolism

Margaret Drabble – A Writer’s Britain 1979
The medieval mind saw nature as hostile, dwelt on its horrors rather than its beauties, sought safety rather than wilderness.  The great forests were inimical to human life, dangerous and wolf infested, an obstacle to be hacked and cleared and burned down before man could survive.  The population was tiny, the waste expanses vast, and each little settlement was a precarious endeavour.

Thus a forest was symbolically ideal to represent your worst fears, your greatest challenges blocking your path to better places and states of mind.  Palaces, castles, mountains tops and mounds offered places of refuge.