Through the Looking Glass - Ch 02 - 4 Marking out the route

Mirror and opposites again, as well as the concept of a plan for your own journey equivalent in a sense to one's destiny plus a bit of added fate. 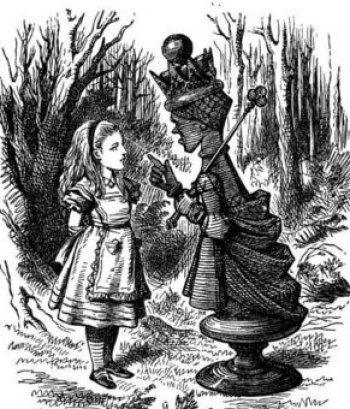 'I'd rather not try, please!' said Alice. 'I'm quite content to stay here--only I AM so hot and thirsty!'

'I know what YOU'D like!' the Queen said good-naturedly, taking a little box out of her pocket. 'Have a biscuit?'

Alice thought it would not be civil to say 'No,' though it wasn't at all what she wanted. So she took it, and ate it as well as she could: and it was VERY dry; and she thought she had never been so nearly choked in all her life.

`While you're refreshing yourself,' said the Queen, `I'll just take the measurements.' And she took a ribbon out of her pocket, marked in inches, and began measuring the ground, and sticking little pegs in here and there.

`At the end of two yards,' she said, putting in a peg to mark the distance, `I shall give you your directions -- have another biscuit?'

Alice did not know what to say to this, but luckily the Queen did not wait for an answer, but went on. `At the end of THREE yards I shall repeat them -- for fear of your forgetting them. At then end of FOUR, I shall say good-bye. And at then end of FIVE, I shall go!'

She had got all the pegs put in by this time, and Alice looked on with great interest as she returned to the tree, and then began slowly walking down the row.

At the two-yard peg she faced round, and said, `A pawn goes two squares in its first move, you know. So you'll go VERY quickly through the Third Square -- by railway, I should think -- and you'll find yourself in the Fourth Square in no time. Well, THAT square belongs to Tweedledum and Tweedledee -- the Fifth is mostly water -- the Sixth belongs to Humpty Dumpty -- But you make no remark?'

`You SHOULD have said,' `"It's extremely kind of you to tell me all this" -- however, we'll suppose it said -- the Seventh Square is all forest -- however, one of the Knights will show you the way -- and in the Eighth Square we shall be Queens together, and it's all feasting and fun!' Alice got up and curtseyed, and sat down again.

At the next peg the Queen turned again, and this time she said, `Speak in French when you can't think of the English for a thing -- turn out your toes as you walk -- and remember who you are!' She did not wait for Alice to curtsey this time, but walked on quickly to the next peg, where she turned for a moment to say `good-bye,' and then hurried on to the last.

How it happened, Alice never knew, but exactly as she came to the last peg, she was gone. Whether she vanished into the air, or whether she ran quickly into the wood (`and she CAN run very fast!' thought Alice), there was no way of guessing, but she was gone, and Alice began to remember that she was a Pawn, and that it would soon be time for her to move.