Through the Looking Glass - Ch 08 - 8 Farewell to the Knight 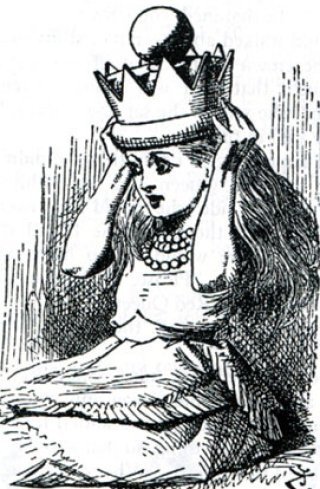 As the Knight sang the last words of the ballad, he gathered up the reins, and turned his horse's head along the road by which they had come. 'You've only a few yards to go,' he said, 'down the hill and over

that little brook, and then you'll be a Queen--But you'll stay and see me off first?' he added as Alice turned with an eager look in the direction to which he pointed. 'I shan't be long. You'll wait and wave your handkerchief when I get to that turn in the road? I think it'll encourage me, you see.'

'Of course I'll wait,' said Alice: 'and thank you very much for coming so far--and for the song--I liked it very much.'

'I hope so,' the Knight said doubtfully: 'but you didn't cry so much as I thought you would.'

So they shook hands, and then the Knight rode slowly away into the forest. 'It won't take long to see him OFF, I expect,' Alice said to herself, as she stood watching him. 'There he goes! Right on his head as usual! However, he gets on again pretty easily--that comes of having so many things hung round the horse--' So she went on talking to herself, as she watched the horse walking leisurely along the road, and the Knight tumbling off, first on one side and then on the other. After the fourth or fifth tumble he reached the turn, and then she waved her handkerchief to him, and waited till he was out of sight.

'I hope it encouraged him,' she said, as she turned to run down the hill: 'and now for the last brook, and to be a Queen! How grand it sounds!' A very few steps brought her to the edge of the brook. 'The Eighth Square at last!' she cried as she bounded across, ……. and threw herself down to rest on a lawn as soft as moss, with little flower-beds dotted about it here and there. 'Oh, how glad I am to get here! And what IS this on my head?' she exclaimed in a tone of dismay, as she put her hands up to something very heavy, and fitted tight all round her head.

'But how CAN it have got there without my knowing it?' she said to herself, as she lifted it off, and set it on her lap to make out what it could possibly be.

It was a golden crown.